A cautious end to a long season of GOP gubernatorial debates 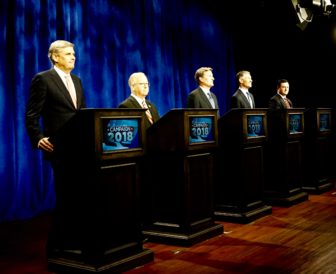 GOP voters go to the polls Tuesday to choose from among the largest field the state has ever seen in a gubernatorial primary: Danbury Mayor Mark Boughton; former Trumbull First Selectman Timothy Herbst and three businessmen who never have held elective office — Steve Obsitnik of Westport, Bob Stefanowski of Madison and David Stemerman of Greenwich.

Despite their references to multi-point plans and blueprints, their campaigns are closing without anyone explaining how they would meet the two biggest challenges awaiting the next governor: How would they close a $2.1 billion shortfall in their first year, and how would they maintain and improve critical transportation infrastructure without new revenue.

Herbst and Stefanowski have signed Grover Norquist’s pledge not to raise taxes. Stefanowski and Boughton insist they can accomplish what former Gov. John G. Rowland promised, but never attempted: Repeal an income tax that has been Connecticut’s single largest revenue source since its adoption in 1991.

All five vow that no one will pay a highway toll if they are elected.

Boughton, who is making his third run for governor, first broached the idea of eliminating the income tax a year ago. Stefanowski introduced himself to Connecticut voters on Dec. 4, appearing with his paid consultant, supply-side economist Arthur Laffer. Stefanowski promised to phase out taxes on wages, corporate profits and inheritances and leave the sales tax as the primary means of funding state government.

“Every candidate on this stage either wants to eliminate or cut taxes. You have a moral obligation to tell voters how you are going to do it,” Herbst said Wednesday. “We are six days away from a primary election, and the two candidates who are advocating for the elimination of the income tax have not told us how they are going to do it.”

“I think it’s a bunch of nonsense to talk about getting rid of the income tax,” Obsitnik said. “It’s half our revenue.”

Stemerman said no one can talk credibly about cutting any tax without first resolving how to reduce the state’s crippling unfunded pension liability.

Florida and Texas never had a state income tax. Tennessee did repeal its limited income tax, which applied to investment income. The tradeoff is that Tennessee, according to the Tax Foundation, now has the nation’s second highest combined rate of state and local sale taxes — a 9.46 percent levy that applies to food, though not certain luxury items. Overall, according to a study by the Federal Reserve in 2015, Tennessee  had the most regressive tax structure in the U.S., sparing the wealthy and landing most heavily on poor and middle-income residents.

None of the candidates are open to tolls, and none of them offered a new revenue source either Wednesday or in a debate Monday.  They said government cannot be trusted with more revenue.

“It really amounts to a $700 million tax on the middle class,” Boughton said of tolls. The actual impact is uncertain, given that Connecticut has no plan for implementing tolls.

“I think we all stand shoulder to shoulder on this,” Obsitnik said. “Whenver we send more money to Hartford, we know what happens. It goes to some other political pet project, and we cannot live with that.”

Stemerman, the founder of the hedge fund, Conatus Capital, tried to separate himself from the pack by suggesting he, alone, had a viable plan by relying on public-private partnerships to maintain and improve infrastructure.

“What I’ve heard on the stage is what they are against,” Stemerman said. “I haven’t heard what they are for. What I think is critical for leadership is to propose solutions. And what we propose is to attract billions of dollars of private investments. And I know that we can do this, because at my business, Conatus Capital, we owned the shares of companies that invested in billion-dollar projects, multibillion-dollar projects — airports, roads and trains.”

Public-private partnerships can streamline projects and, in some cases, provide alternative financing. But they are no panacea. Stemerman glosses over an essential ingredient in such partnerships — they still can require massive amounts of capital from the government, and the private entities demand a return on their investment.

On his campaign web site, Stemerman cites the public-private partnership that is replacing  Goethals Bridge between Elizabeth, N.J., and Staten Island, N.Y. The project is underwritten by the Australian investment bank Macquarie. What Stemerman doesn’t say is that government, in this case the Port Authority of New York and New Jersey, will be paying the bank-led consortium more than $2 billion over time.

According to the New York Times, the port authority will pay about $56.5 million a year for 40 years once the new bridge opens.

The candidates balked when asked how they would respond as governor, should the Supreme Court overturn Roe v. Wade, returning the issue of abortion back to the states.

“This election needs to be laser-focused on the economy,” Stefanowski said.

All five dismissed the issue as a Democratic talking-point for the general election, saying Connecticut already has codified the precepts of Roe in state law. They said they were largely satisfied with the status quo, though Herbst and Stefanowski would support a parental consent or parental notification law.

On the question of whether they would welcome President Trump to campaign for them in the fall, all replied that they would. Democrats say they hope the president does them the favor of a visit.