Hebron — Eleven candidates were invited, nine accepted and two bickered to the point that another proclaimed the night “an embarrassment.” And so it went Wednesday in the second of the Connecticut Republican Party’s five monthly showcases of the politicians vying to become the GOP nominee for governor in 2018.

With no practical way to thin the field, the Republicans are facing a long and bumpy road to their  nominating convention in May at the Foxwoods Resort Casino, whose tribal owners are engaged in a multi-million-dollar lobbying battle at the state legislature over MGM Resorts International’s proposal to build a gambling resort in Bridgeport.

Peter Lumaj, a refugee from Communist Albania and an unabashed admirer of President Trump, who demonstrated in 2016 that decorum accomplishes little on a stage crowded with candidates, spent much of the evening goading his rivals, especially the five Republicans who have held public office. He repeatedly dismissed them as “career politicians,” members of a political establishment that has left the state in fiscal and economic disarray. 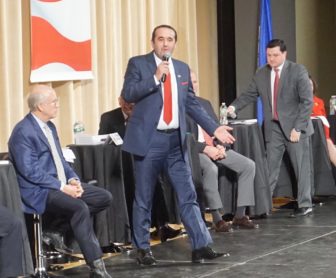 Lauretti and Boughton skipped last month’s opening forum. David Stemerman and Bob Stefanowski, both political newcomers with backgrounds, respectively, in hedge funds and corporate finance, declined invitations to both forums, part of a series intended to expose the candidates to voters in each of the five congressional districts.

“We need some common-sense conservative principles,” said Lumaj, an immigration lawyer and real-estate investor making his third bid for statewide office after running unsuccessfully for U.S. Senate in 2012 and secretary of the state in 2014. “The career politicians are the problem we have.”

With 15 minutes left in the program, former Trumbull First Selectman Tim Herbst turned on Lumaj and proclaimed him as the least qualified of the nine Republicans on stage, a man whose boasting of being a true outsider is meant to mask his inability to win an election and his inexperience in governing.

“There was a lot of talk tonight about career politicians,” Herbst said. “And you know what, let me tell you something, Peter: When you’re a leader, and you govern and you get the 3 a.m. phone call from your chief of police in the middle of a crisis, and when you have to work with your superintendent making budget decisions that affect the lives of thousands of people, and when you have to respond to weather-related emergencies, and when you make decisions every single day that affect people’s quality of life, their school system, their safety — then and only then you can lecture me about career politicians.”

A red-faced Herbst was not finished. 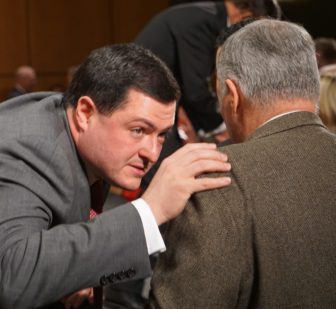 Tim Herbst consults with his father during the intermission.

“And you know what?” Herbst asked, pausing as he returned to his stool. “The last person on this stage I want to get the 3 a.m. phone call as governor is Peter Lumaj.”

Much like Trump, little seemed to rattle Lumaj, whose tirades amused some of his targets.

He quickly doubled-down on his criticism of Herbst as a political insider.

WFSB reporter Susan Raff, who moderated the forum with Christine Stuart of CTNewsJunkie, declined to give Herbst another shot at rebuttal, saying, “Alright, we’re going to move on now.”

Handler stood to take his turn asking the unlikely question that set off Lumaj and Herbst — an inquiry about their thoughts on regionalization. But he was not ready to move on.  “I’m going to use some of my time to end this nonsense,” Handler said. “What we’re doing tonight is an embarrassment.”

J.R. Romano, the Republican state chairman, said he devised the loosely structured forums to both promote and test the Republican contenders before delegates endorse one of them in May, a prelude to a primary in August. To qualify for the primary, the candidates need to win 15 percent of the convention vote or undertake the more difficult task of petitioning. 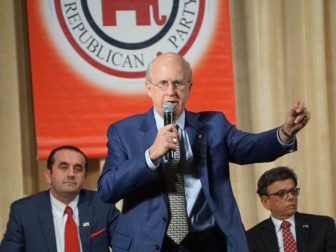 The Democratic Party, whose field is taking shape more slowly, have yet to host a forum for its candidates, though progressive groups held one.

The opening question was sobering: Given the state’s deep fiscal problems, why do they want the job?

Obsitnik, a tech entrepreneur and former Naval submariner, said, “What matters is the mission.”

“I don’t think there is a question in anyone’s mind that Connecticut is a state worth fighting for,” Lauretti said.

Unlike Republicans in the past two gubernatorial campaigns, when the state GOP seemed reluctant to confront state-employee unions over the cost of wages and benefits, most of these candidates signaled they would seek radical changes in pension and retire-health benefits, which are now set in collective bargaining.

The Republicans want them set by statute, with several saying the state should abolish pensions and emulate the private sector by moving to a defined contribution plan.

“We have to get out of the pension business,” Handler said. “We’re beyond reform.”

“We can no longer afford the benefits system that we have,” Boughton said.

Srinivasan, who is a physicians, said the state, at a minimum, has to eliminate automatic cost-of-living increases for retirees, shrink the ranks of supervisors and attack Medicaid fraud.

The candidates said those hard-line positions are not an attack on unions, but a recognition that the current system is not sustainable.

Walker said state government is “too big and promises too much,” the result of career politicians and unions selling out the taxpayers. 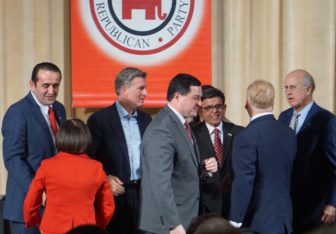 The audience buzzed when Stuart asked about the Me Too movement and whether any of them had been accused of sexual harassment. None said they had been, and most said they were grateful for the question.

Boughton and Herbst said they had discharged public employees guilty of harassment.

As they did in the first forum, Lumaj and Herbst each leaned to the right, while Boucher warned against nominating a candidate unable to win over unaffiliated voters.

“We have to appeal — we’re a deep-blue state — to the other side of the aisle,” Boucher said. “Who do you think can bring the votes?”

None of the candidates said they voted against Trump. Walker supported Ohio Gov. John Kasich in the primary, but said he voted for Trump in November.

Boughton had tweeted he had written his dog’s name on the ballot.

“I made a poor attempt at being humorous,” Boughton said. “The fact of the matter is I supported our nominee — just like everybody else in this room.”

Lumaj was the most effusive about the president.