They oppose Trump — no debate on that

In a two-night, four-hour quizzing, 20 Democrats tried to persuade TV viewers they were worthy of being the next president of the United States — mostly by saying how they differ from the current President, Donald Trump.

Health care was a major campaign theme as it was in the last election, but for the first time in a presidential race, so was gun violence.

Several of the Democrats identified climate change, Russia and Trump himself as “the greatest threat to national security” — a label that apparently made little impression on the commander-in-chief the next day as he made light of Russia’s meddling in the 2016 elections.

Certainly the president has more serious problems with the Democrats than their harsh criticisms — like Tuesday’s court ruling that Connecticut Sen. Richard Blumenthal could proceed with discovery in his suit alleging Trump’s business dealings violate the Constitution’s emoluments clause.

All the candidates at Wednesday night’s Democratic debate.

The U.S. Supreme Court also dealt the president at least a temporary setback when it ruled against his administration’s effort to include a citizenship question in the 2020 census — part of an effort that Connecticut officials say has already terrified undocumented immigrants.   The high court also said Friday that next year it would take up the case on whether to end deportation protections of the so-called “Dreamers,” some 800,000 undocumented people who were brought here as children.

Some Democrats did concede to appropriate money to address the overcrowding and inhumane conditions facing asylum seekers on the U.S. – Mexico border — but not U.S. Rep. Rosa DeLauro, D-3rd District, who said she could not trust the administration to properly use the $4.6 billion to protect the migrant children.

Democrats like U.S. Rep. Jahanna Hayes, D-5th District, are also opposing Trump’s effort to tighten food stamp requirements, potentially pushing thousands of low-income Connecticut participants off of the program. They are also hoping to repeal the tax law that limited to $10,000 the deductibility of state and local taxes on federal income tax returns.

Earlier in the week, U.S. Rep. Jim Himes, D-4th District, broke with his Connecticut colleagues to call for an inquiry into Trump’s impeachment. 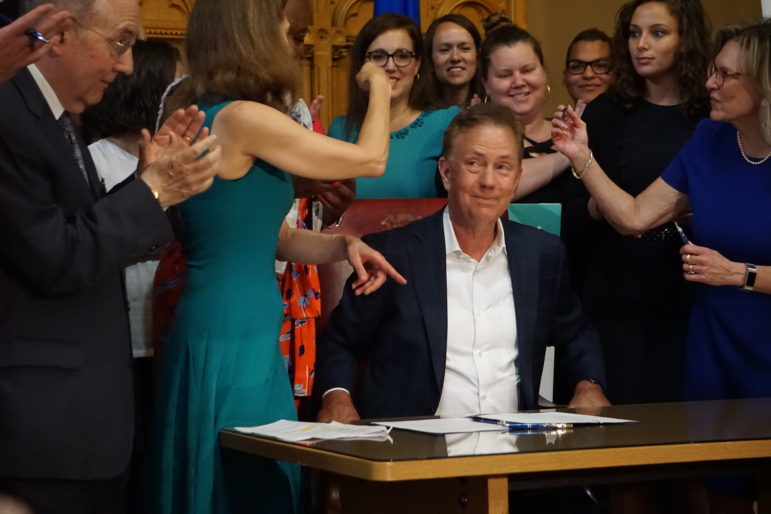 Back in Connecticut, Gov. Ned Lamont signed into law a new $43.4 billion budget, hailing its benefits, even as others wondered whether the state will be able to collect an extra $180 million in taxes it anticipated.

The governor is still trying to find a way to persuade state legislators to implement tolls on Connecticut’s major highways. If they don’t, he warned, he’s just going to have to limit state borrowing for non-transportation needs. Lamont is trying to correct for problems caused long ago by underfunding state employee pensions and benefits — a problem that is causing about $26 million in problems for the University of Connecticut Board of Trustees in its latest budget.