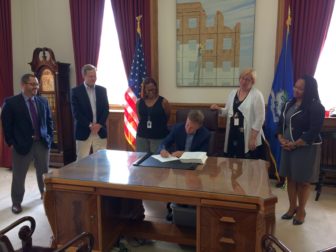 Gov. Lamont puts his signature on a new two-year state budget Wednesday as legislative leaders and his budget chief look on.

The Democratic governor hailed it as a plan that averts a big deficit without raising income tax rates, makes key investments in education, job growth and health care, and promotes long-term fiscal stability.

But Republicans say the package overtaxes businesses and consumers, spends and borrows recklessly, leaves Connecticut with no viable long-term transportation building program, and skirts the legal requirement of a balanced budget.

“For years, instability in the state’s finances has resulted in slow growth and volatility in our economy — and this budget was adopted with a focus on providing the foundation from which our state can grow,” Lamont said. “When the fiscal year closes, Connecticut will have the largest rainy day fund in history and this budget maintains and grows our reserves, providing reliability and predictability for our taxpayers, businesses, and those looking to invest in our state well into the future.”

But Senate Minority Leader Len Fasano, R-North Haven, said “It’s no surprise the governor is running to sign this budget as quick as he can before even more problems come to light. He’s signing it behind closed doors with no fanfare whatsoever because this is not a budget to be proud of. It doesn’t balance. It’s gimmick-laden. The whole document is a sham.”

State finances were projected to run $3.7 billion in the red over the next two fiscal years combined unless adjustments were made. The new budget meets one of Lamont’s chief goals: to avert this potential shortfall without increasing income tax rates.

Connecticut also is projected to have more than $2.2 billion in its emergency reserve by Sept. 30. This would be the largest fiscal cushion in state history, and could grow by several hundred million more dollars over the next two years if revenue projections hold up.

Spending growth in the General Fund — which covers the bulk of annual operating expenses — is limited to 1.7 percent in the first year and 3.4 percent in the second.

The budget also restructures contributions into two state pension funds, cutting expenses over the next two fiscal years but shifting billions of dollars in contributions, plus interest, onto taxpayers after 2032.

It resolves a four-year old lawsuit hospitals have pending against Connecticut over a controversial provider tax. Though full details of the settlement haven’t been released and still must be ratified by hospitals, Lamont administration officials have estimated it could cost the state about $160 million later this summer.

It expands the HUSKY A Medicaid program for working poor adults to serve roughly 4,000 more people each year and includes rate increases for nursing homes which are key to averting strikes this summer at 25 facilities.

The budget increase gives cities and towns an extra $116 million in Education Cost Sharing grants over the next two years combined and expands funding for workforce development programs. It also establishes a program in the second year to allow full-time students to attend community college debt-free. But that is conditional upon the state achieving success with new online lottery sales and recruiting new community college students who qualify for large amounts of federal financial aid.

But Republicans countered that the plan is riddled with tax hikes, financial gambles and question marks.

The budget generates about $340 million in the first year and $365 million in the second year by increasing taxes and fees and by canceling previously approved tax cuts that haven’t yet taken effect.

And this doesn’t include $1 billion in tax relief that was supposed to be delivered to hospitals. Most of that relief is expected to be canceled, though, as part of the settlement.

Several sales tax exemptions on services are eliminated. The sales tax rate on digital downloads rises from 1 to 6.35 %, while a 1 percentage point surcharge is placed on restaurant food and other prepared meals.

Grocery store and other retail shoppers will pay a new 10-cents-per-bag tax on plastic bags and there is a new tax on certain vaping products. The alcoholic beverages tax will rise 10 percent.

Owners of limited liability corporations and other small and mid-sized businesses that don’t pay the state corporation tax will pay an extra $50 million per year due to the reduction of an income tax credit.

The business entity tax, a $250 fee paid once every two years, is repealed, saving companies $44 million But the new budget raises three times that amount from businesses through other fee and tax changes.

Seniors will receive a promised tax cut through expanded income tax exemptions for social security and pension earnings. But other income tax relief scheduled to kick in for retired teachers, college graduates with student loan debt, and middle-income households without children, all was suspended.

And a new “mansion tax” surcharge was added to the real estate conveyance levy. It effectively targets only those who sell houses for more than $2.5 million and then move out of Connecticut.

The new budget also cancels more than $170 million in sales tax receipts originally set to be dedicated to transportation over the coming biennium.

To remain in balance, the plan assumes the Lamont administration will save almost $460 million across two years by collaborating with state employee unions.

This involves lowering health care costs — without reducing benefits — through various efficiencies, and also refinancing contributions into the pension fund.

Fasano noted neither of these initiatives has been resolved yet and the new fiscal year begins Monday.

The two-year budget also assumes $90 million per year in state income tax receipts — above the level fiscal analysts for the executive and legislative branches projected in their last joint forecast on April 30.

Lamont said Tuesday that income tax collections were more robust in May, and the additional revenue will be received. These are “good, conservative assumptions that are going to play out in the future,” he said.

But Fasano called the move reckless, adding that it’s been nearly a decade since the last recession ended and several economists have warned Connecticut and the nation could topple into the next one in the next year or two.

“I don’t know what world they are living in,” he said.