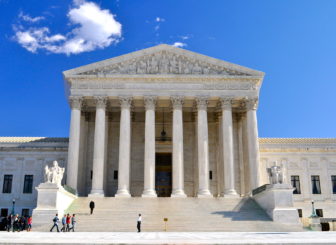 Washington – For more than two years, federal courts weighed the fate of the nation’s undocumented youth. Now they will have to wait for one more, the Supreme Court, to weigh in on a program that shielded them from deportation.

On Friday, the Supreme Court said it hear an appeal of cases that have prevented the Trump administration from ending  protections for more than  800,000 immigrant youth.

The high court could keep those protections in place, at least temporarily, or open the door to eventual deportation hundreds of thousands of immigrant youth. The Supreme Court said it will take up the cases in its next term, which begins in October.  A decision on the case is expected next spring or summer.

The path to the Supreme Court has been long and convoluted.

In 2012, President Barack Obama implemented the Deferred Action for Childhood Arrivals, or DACA, program that allowed undocumented youth who arrived in this country as children or infants to apply for permission to remain in the country and work permits.

About 10,000 Connecticut youth, known as Dreamers, have received or are eligible for DACA protections.

Several federal courts issued injunctions blocking the Trump administration from ending the program, allowing DACA recipients like Carolina Bortelleto, who as a child emigrated to Connecticut from Brazil with her twin sister Camilia, to continue to renew their status every two years.

“We don’t know what’s going to happen, the (Supreme Court)  is conservative,” said Carolina Bortelleto, co-founder of CT Students for a Dream. “But it’s important to remember that lower courts have ruled DACA is legal.”

In November, the U.S. Court of Appeals for the Ninth Circuit, located in San Francisco, said the president has broad powers to alter the policies of earlier administrations. But the court said the legal reasons offered by the Trump administration for ending DACA fell short.

The court also questioned “the cruelty and wastefulness of deporting productive young people to countries with which they have no ties.”

A second federal court, the Fourth Circuit Court of Appeals located in Richmond, Va., issued a similar ruling in May that said the administration’s decision to end the DACA program was  “not adequately explained and thus was arbitrary and capricious.” 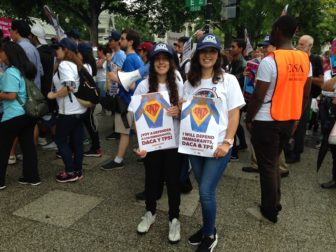 Camila Bortelleto and other members of CT Students for a Dream at a 2018 White House protest over Trump administration efforts to end DACA.

The administration is expected to argue Trump has the same executive authority as Obama to shape immigration policy. It is also expected to cite the Supreme Court’s 4-4 deadlock on an appeal of a federal court decision that blocked implementation of a similar program Obama initiated with executive authority.

Known as Deferred Action for Parents of Americans, or DAPA, the program would have allowed certain legal immigrants who had lived in the United States since 2010 and had children who were either American citizens or lawful permanent residents to apply for renewable work permits and exemptions from deportation.

Uncertainty over the future of DACA prompted United We Dream, a national organization of undocumented youth, to tweet “The Supreme Court of the United States (#SCOTUS) has decided to take on the #DACA case. If you are a DACA recipient you need to renew your work permit as soon as possible!”

While Dreamers and immigrant advocates distrust the Supreme Court, which has a conservative majority, some conservatives who oppose DACA are concerned that Chief Justice John Roberts might side with Supreme Court liberals on this case.

“He’s more cynical of administrative power than the other judges,” Penn said.

Even if the Supreme Court upholds the lower court injunctions, the fate of hundreds of thousands of immigrant youth will still be in limbo as the lower courts return to their review of challenges to Trump’s move to end DACA.

“To some degree, there’s no end in sight,” Penn said of the uncertainty over the fates of the nation’s undocumented youth.

A DREAM in Congress

When Obama initiated DACA, applicants for the program were required to be younger than 31 on June 15, 2012, must have come to the U.S. when they were younger than 16, and must have lived in the U.S. since 2007.

Since the program has not been expanded to include newer arrivals, many immigrant youth in the United States can’t benefit from DACA — even if those protections may be short lived.

When he announced an end to the program, Trump said it is up to Congress to establish permanent protections for the nation’s Dreamers through legislation.

But Trump has not approved any of the proposals, the most generous called the DREAM Act (short for Development, Relief and Education for Alien Minors Act), that lawmakers have brought to him.

Earlier this month the U.S. House approved a generous bill that would provide Dreamers protection and a pathway to citizenship. But the Senate has not approved a Dreamers bill.

“The Republican Senate must honor the will of the American people and pass this critical legislation,” Pelosi said.

“Dreamers have come out of the shadows & deserve a pathway to citizenship,” the senator tweeted. “DACA still stands, but Congress must urgently act to protect these young migrants. SCOTUS decision to hear this case should prompt strong bipartisan support for the DREAM Act.”

2 thoughts on “Fate of CT’s undocumented youth in hands of U.S. Supreme Court”