Mueller's testimony underwhelms; in Connecticut, gender issues are in the news

When it was over, the president and his Republican supporters described Mueller’s clipped and sometimes halting testimony before two Congressional committees using terms like “horrible” and “pointless,”  and returned to their favorite catch terms in describing the notion of the probe of Russian interference in the U.S. elections as a “hoax” and “witch hunt.”

Connecticut Sen. Richard Blumenthal’s observation: “Slandering Mueller & his team personally seems more important to Trump cronies than facing the damning facts in this report & the reality that our elections are under foreign attack.”

U.S. Rep. Jim Himes, D-4th District, anticipated that the hearing would be “a let down.” But he was in on the questioning Wednesday afternoon and asked Mueller about Russian interference in the elections and the Trump campaign’s many lies — all painstakingly documented in Mueller’s voluminous report.

The political high drama (and attendant media coverage) had the potential to divert attention on other moves by the Trump administration — like the one that threatens to kick some 11,000 Connecticut people off food stamps.

Earlier in the week Blumenthal’s suit against the president for allegedly violating the emoluments clause of the Constitution hit a speed bump.

Elsewhere in Washington, U.S. Sen. Chris Murphy took another shot at calling out the “madness” of the way colleges and the NCAA treat student athletes. 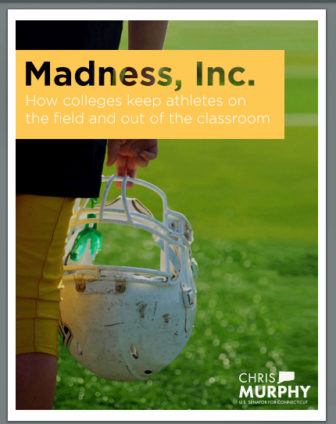 State Attorney General William Tong, meanwhile, never one to hesitate taking on a Trump policy, argued in court that a Connecticut man’s pardon granted by the state should have the effect of negating his deportation order.

Back in Connecticut, the state government’s executive branch is treating women more equitably, according to a report, paying them slightly more on average than their male counterparts. Racial inequity continues to be a concern there. So does the fact that, according to the head of the Department of Administrative Services, a third of the state’s workforce will be retiring in the next three years.

State salaries and those for employees at quasi-public agencies will be easier to track, at least, through a new initiative by State Comptroller Kevin Lembo.

On the high school sports playing field, policy toward transgender athletes has created friction with cisgender girls who often find themselves losing to athletes who are biologically male despite their female gender identity.

Friction between Gov. Ned Lamont and legislators over a bill governing restaurant worker wages appears to be abating, however, since state House and Senate leaders think they can reach a deal moderating a law the governor vetoed rather than trying to override him.

The state’s new commissioner of public health, meanwhile, is carefully staying out of the debate on whether to repeal the law that for religious reasons allows parents to send their children to school without being vaccinated.