Murphy: Treatment of athletes by colleges and NCAA is ‘madness’ 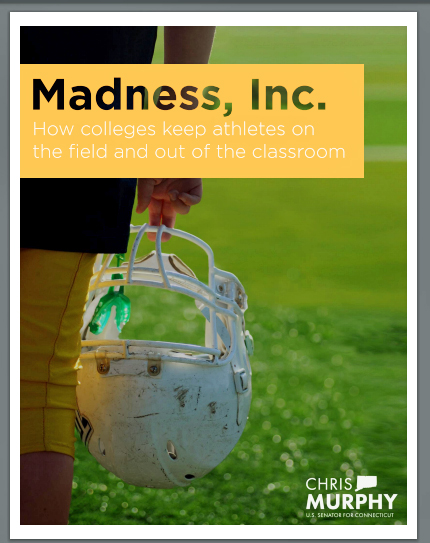 Washington – Sen. Chris Murphy has issued his second report on what he calls “madness” in college athletics, which he says leaves student athletes with worthless diplomas or no diplomas at all.

“These kids are being exploited,” Murphy said. “They are being treated as a commodity.”

To Murphy, how college athletes are treated is a civil rights issue because he says most of the students who are mistreated by the nation’s colleges are black and the people who exploit them and profit from their athletic prowess are white.

His latest report on student athletics, “Madness, Inc.: How Colleges Keep Athletes in the Field an Out of the Classroom,” details what he considers some of the abuses.

They include keeping students on the playing field or the practice field for many hours every week, impeding their students’ ability to attend class or study. Time involved in athletics could reach as high as 60 hours a week, Northwestern University revealed during a National Labor Relations Board hearing on the school’s football team.

Murphy’s report also says student athletes are pushed into “easy majors and coursework unrelated to their interests or ambition.”

It retells the story of Stephen Cline, a former Kansas State University lineman, who told USAToday that he wanted to become a veterinarian but ended up “majoring in football.”

Cline said his academic counselor pushed him towards settling for a sociology degree and after graduation had to enroll in college again to earn the prerequisites for acceptance into a veterinarian program.

Other students are allowed to take “paper classes” to keep the in good academic standing required by National Collegiate Athletic Association to keep them eligible to play.

Those “paper classes” are independent study courses that require only a research paper at the end of the semester.

“Often these papers were plagiarized, written by the athletes’ tutors or barely qualified as a legible paper at all,” Murphy’s  report said.

The report also said the NCAA inflates the graduation rates of student athletes and that in reality they are very low. According to an analysis of the 2015 NCAA men’s basketball tournament “several teams were lucky to graduate any players at all,” Murphy’s report said.

The University of Cincinnati and Indiana University each reported a graduation rate of 8 percent and Oklahoma State University “was just behind them at 9 percent.”

Some college athletes aren’t even able to read, said Mary Willingham at a panel discussion on Murphy’s report Thursday on Capitol Hill. 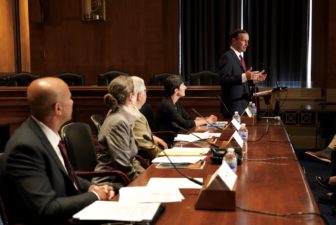 Sen. Chris Murphy and panelists at discussion of “Madness, Inc.: How Colleges Keep Athletes in the Field an Out of the Classroom.”

A former learning specialist at the University of North Carolina, Willingham blew the whistle on some of the school’s academic practices and said certain student-athletes were not qualified for college.

She said, lacking a real education, many student-athletes “go back to the poverty they came from.”

Murphy’s first report on the state of college athletics focused on the NCAA ban on player compensation.

The senator said colleges and the NCAA maintain that scholarships are “plenty of compensation” for the time students spend on the playing field and the courts.

“The argument people always make against compensating college athletes is that their compensation is the education they receive. But what if they’re getting cheated out of that opportunity and not really receiving an education?” Murphy asked.

Supporters of compensation to student athletes range from those who think those amateur athletes should own the rights to their name and fame and be able to market them on products and in advertisements to those, like Ramogi Huma, president of the National College Players Association, who say student athletes deserve a regular paycheck.

“The NCAA’s ban on player compensation is counter to America’s commitment to free enterprise as well as a civil rights injustice, said Huma, who is a former football player for UCLA.

“I love college sports,” he continued, “but I hate the way it dominates policy at the University of Connecticut.”

Murphy said he hopes his investigation into college athletics results in some voluntary changes at colleges and the NCAA.

If not, Murphy said, Congress may have to step in, which he said isn’t his preference.