Cuomo is coming to talk about regionalism, pot and transportation 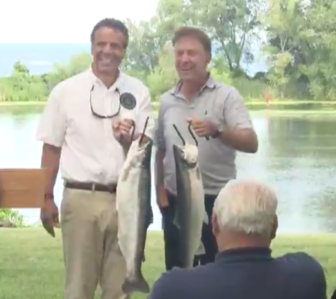 Regional approaches to marijuana legalization and transportation will be the focus Wednesday morning when New York Gov. Andrew Cuomo visits Gov. Ned Lamont at the Executive Residence in Hartford, the second time in a month the gubernatorial neighbors have met face to face.

Cuomo’s visit comes a day after he called for a “regional symmetry” with Connecticut and New Jersey on marijuana legalization and vaping regulations and a week after the Metropolitan Transportation Authority released a five-year capital plan that favors the Long Island Rail Road over Metro-North, the commuter rail that connects New York City to Connecticut.

“You know everyone’s talking about legalizing marijuana,” Cuomo told Long Island News Radio. “For one state to do it, it makes no sense if the neighboring state has a totally different policy because then you just incentive people to drive over the border and buy it there.”

If Cuomo goes forward with his plan to seek marijuana legalization next year, that could give Lamont political cover and a push to do the same. Legalization did not progress in the General Assembly this year, and its prospects had not been considered better in an election year. All 187 state legislators are up for re-election in 2020.

Administration sources say the meeting Wednesday is likely to be one in a series of efforts by Lamont to seek regional approaches.

Lamont has attempted to develop working relationships with the governors of Connecticut’s three border states since taking office in January. He has hosted a meeting with Govs. Charlie Baker of Massachusetts and Gina Raimondo of Rhode Island, and the trio is meeting again in Providence next month. Lamont and Cuomo went fishing last month on Lake Ontario.

Cuomo and Lamont are expected to meet for an hour Wednesday, then hold a news conference at midday.

The expected attendees include a man familiar to Cuomo: Joseph J. Giulietti, the former Metro-North president hired by Lamont as his transportation commissioner. Lamont is about to make a second try at developing a consensus in Connecticut around transportation infrastructure, including better Metro-North service to New York.

Connecticut is responsible for the railroad on this side of the border, but state officials here always are interested in seeing the New York portion of the New Haven line get attention. Cuomo, however, is facing intense pressure to modernize the New York City subway, as well as its two commuter railroads, LIRR and Metro-North.

As Newsday reported, the LIRR and Metro-North carry similar passenger loads — 89 million to 87 million last year — but the $54 billion capital plan released last week calls for spending $5.7 billion on LIRR and $4.6 billion on Metro-North. The plan does call for four new Metro-North stations in the Bronx.

Overall, the plan is $20 billion higher than the previous one.

“At the end of this five-year period, New Yorkers will see a revitalized and modern system for the 21st century and beyond,” Patrick J. Foye, the authority’s chairman, said at a news conference last week.

Like Connecticut, New York now has to find the money.