Connecticut students had mixed results this year on the test known as “the nation’s report card,” with a decline in fourth-grade reading scores, improvement in fourth-grade math, and scores that stayed about the same statistically for eighth graders.

While acknowledging that the fourth-grade reading test score showed a statistically significant decline since it was last administered in 2017, Ajit Gopalkrishnan, the state’s chief performance officer, noted that the Connecticut’s scores exceeded the national averages on all of the tests.

“We continue to have strong achievement in both grades four and eight in both reading and math,” Gopalkrishnan said. “Very few states exceed Connecticut in terms of their achievement.”

The National Assessment of Educational Progress (NAEP) test, which is administered every two years by the U.S. Department of Education’s National Center for Education Statistics, is of widespread interest because it is the only test that compares performance state to state.

It is administered to fourth and eighth graders in reading and math. In Connecticut, about 2,200 students were tested by the national agency in each grade and for each subject. The students, who took the test on tablets, came from more than 100 Connecticut schools and tests were administered between January and March.

As has been the case for decades in Connecticut on the NAEP test and on the state’s own standardized tests, the scores showed a significant gap between the scores of white students and those of black and Latino students, as well as between middle class and economically disadvantaged students. However, the scores did show some improvement in math for fourth-grade Latino students. 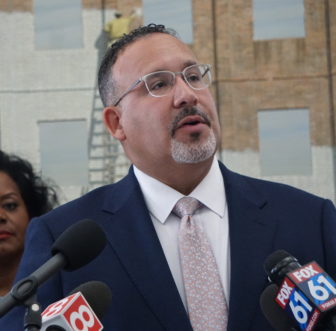 “While we are pleased to see that overall our students in Connecticut performed better than most of their peers across the country, we still have much more work to do to close the disparity gaps that exist around the state,” said Education Commissioner Miguel Cardona. “To address this, we are bringing all stakeholders into the fold by partnering with families, educators, community partners, higher education and business to prepare all students to succeed in school and after graduation.”

This year, nationally, math scores went up for fourth graders, but declined for eighth graders, while scores dipped for reading in both grades.

Peggy G. Carr, associate commissioner of the National Center for Education Statistics, said there has been no progress nationally in either mathematics or reading over the past decade and that the lowest performing students are doing worse.

“In fact, over the long term in reading, the lowest performing students — those readers who struggle the most — have made no progress from the first NAEP administration almost 30 years ago,” Carr said.

Noting the declines in eighth grade performance in both reading and math, Carr said, “Eighth grade is a transitional point in preparing students for success in high school, so it is critical that researchers further explore the declines we are seeing here, especially the larger, more widespread declines that we are seeing in reading.”

In a conference call with reporters, Carr emphasized that while she could talk about the scores, her agency doesn’t determine the “why” behind them.

Gopalkrishnan said that Connecticut’s scores were stronger than the national results, noting that on three of the four tests, “We’re actually either going up or holding steady.”

In reading, the fourth grade scores dropped from 228 in 2017 to 224 this year, compared to a national average of 219. Forty percent of Connecticut’s fourth graders hit the proficient mark of 238 in reading.

Eighth graders saw a small increase in math, from 284 to 286, that was not considered statistically significant, with 39% of these students hitting the proficient mark of 299. The national average for this category was 281.

In reading, eighth graders declined slightly from 273 to 270 — a drop that  also was not considered statistically significant–  with 41% reaching the proficient  level of 281. The national average in reading for eighth graders was 262 this year.

For each test in each grade, black, Latino, and low-income students scored about 20 to 30 points lower than white students, evidence of Connecticut’s persistent achievement gap.

Since the 1990s, when the tests were first administered, Connecticut students have shown marked improvement in math while reading scores have stayed fairly flat.

Gopalkrishnan noted that the population has changed greatly in Connecticut in the last 20 years, with the percentage of students considered “high needs” passing 50% in the past few years.

He explained that a high needs student is someone who is learning English, comes from a low-income family, or has a disability.

“We are a majority high needs state,” he said. “We are a little different from some of our New England friends.”

It may be that students are doing better in math because math is “more of universal language,” Gopalkrishnan said, so students are able to “grasp the mathematics concepts” even if their English isn’t strong.

“There is no magic bullet here,” he said, “but we are working on improving language acquisition for our English learners, who are a substantially bigger proportion of our population than even five years ago.”

Gopalkrishnan said he didn’t bring up the change in Connecticut’s student population as an “excuse.”

“I’m actually trying to say that in spite of population changes … I think it’s good that we didn’t have declines like the nation as a whole,” he said. “I don’t want to claim victory in that, but at least we held our own. We have a lot more work to do, no question.”

However, he said, “the demands that a dramatically different population puts on the education system is something that should be recognized.”