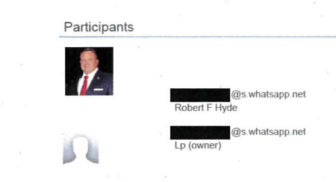 A part of the transcript that identifies Robert Hyde and his communication with Rudy Giuliani associate Lev Parnas.

One email from the committee to Hyde said it was “dismayed to read yesterday that you have made statements to the media which greatly exaggerate the extent of your cooperation with this investigation.”

Hyde had told The Daily Beast he’d turned over “everything that I had between Parnas and I.”

Hyde was catapulted into the narrative surrounding President Donald Trump’s impeachment after Congress released WhatsApp messages between the congressional candidate, who made his living as a landscaper, and Lev Parnas, an associate of former Trump attorney Rudy Giuliani.

In those messages, Hyde referenced the surveillance of Yovanovitch.

Hyde said the exchanges with Parnas were a joke. But a subsequent release of documents from the House Intelligence Committee indicated that Hyde was a middleman providing Parnas with information he’d received from another Trump supporter, Anthony de Caluwe.

House Foreign Affairs Chairman Eliot Engel, D-N.Y., called the messages “profoundly alarming,” and launched an investigation into possible surveillance of Yovanovitch. The ambassador was removed from her post last year after Giuliani determined she would not cooperate with efforts to prod Ukraine into investigating Joe Biden, and his son Hunter, who had served on the board of an Ukrainian energy company.

The staffers also said it was obvious Hyde hadn’t turned everything over because his batch of materials was missing records that Congress already knows about – because they had been turned over by Parnas, the recipient of Hyde’s WhatsApp messages.

Hyde could not be reached for comment, but he told the Foreign Affairs Committee in emails obtained by NBC News that he has “nothing to hide from anyone” and that “it’s starting to become apparent that you and the FBI is trying to set me up with false or fake evidence” to harm his congressional campaign in Connecticut.

According to the NBC News story, Hyde also failed to follow through on a commitment he made on Jan. 25 to turn over his devices to the Foreign Affairs Committee, and he never gave the committee the name of the attorney he said he had hired to represent him.

Hyde told the committee he’d turned over everything he could find on his own devices and had not yet obtained counsel, contrary to what he’d previously said, because he‘d been unable to find someone affordable.