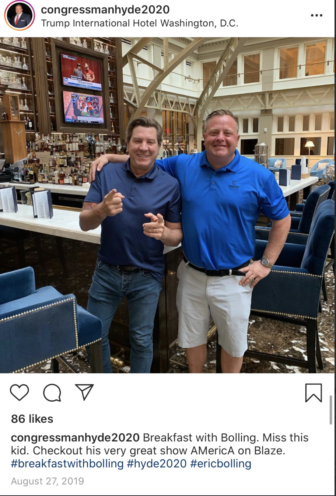 Robert Hyde (right) posted this photograph on Twitter of himself and Eric Bolling, the host of the Sinclair show “America this Week.” The two men are in the bar of the Trump International Hotel in Washington.

Washington –The FBI is taking a closer look at Robert Hyde, a Connecticut congressional candidate and donor to President Donald Trump, and his potential role in efforts to surveil and remove former U.S. Ambassador to Ukraine Marie Yovanovitch, CNN reported Wednesday night.

An FBI spokeswoman in Washington D.C. said she could not comment about any ongoing investigation or confirm the CNN report.

Meanwhile, in an interview Wednesday night on the Sinclair show “America This Week,” Hyde denied spying on  Voyanovitch and said he “barely knows” Lev Parnas, an associate of Trump attorney Rudy Giuliani who received dozens of texts from Hyde concerning Yovanovitch.

“You meet a bunch of these characters when you’re out there in the fundraising at events and supporting candidates,” Hyde told host Eric Bolling. “And you know, we just had some colorful texts, you know, had a few pops way back when I used to drink.”

During his interview,  Hyde called the dozens of texts to Parnas “colorful.”

“We were just playing,” he said, and insisted the texts “were just joking around on WhatsApp.”

“I’m just a little landscaper from Connecticut,” he said.

“We were just playing. I’m just a little landscaper from Connecticut.”

Hyde’s texts to Parnas are part of information collected by the House Intelligence Committee in its impeachment probe of President Donald Trump’s dealings with Ukraine.

They were sent last March at the time Giuliani was engaged in a campaign to push out Yovanovitch, believing she was an impediment to efforts to obtain what he thought would be damning information on Trump’s political rival, former Vice President Joe Biden.

On March 25, Hyde wrote, “The guys over there asked me what I would like to do and what is in it for them.”

Another message said, “They know she’s a political puppet,” followed by, “They will let me know when she’s on the move … They are willing to help if you/we would like a price.”

As Hyde denied involvement in any attempt to surveil Voyanovitch Wednesday evening, the Intelligence Committee released more information, obtained through a subpoena sent to Parnas, who is under federal indictment.

Hyde has a history of brushes with the law.

The Intercept obtained police records showing that Hyde violated a protective order issued by a Washington, D.C., Superior Court judge at the request of a Republican consultant who said Hyde stalked her and intimidated her family over the past year.

In June, he was forced to surrender a number of guns and ammunition as a result of a protective order that was being enforced by Connecticut state police, according to a 2019 incident report from the Simsbury police department. According to the Intercept article, Connecticut police “confiscated Hyde’s firearms in connection to his violation of the restraining order” in D.C.

Another incident report from Simsbury police dated a week later was in response to a complaint by the staff at the First Church of Christ.

“They advised me that about two weeks ago, a man name Robert Hyde began attending Sunday services. I was informed that Hyde was taking videos of himself in and around the church for political campaign purposes and posting them on social media,” the report said.

The report said that “due to Hyde’s unsettling behavior and political campaigning” they wanted police to ask him not to return to the church. When an officer knocked on Hyde’s door and explained the situation “he was surprised by the complaint and understood,” the police report said.

But the most bizarre incident happened at the Trump National Doral Miami.

According to a report from the Doral Police Department, on May 16, 2019, an officer was dispatched to the resort to deal with Hyde, who was distressed and “fearing for his life” and told police “a hit man was out to get him.”

According to the report, Hyde spoke about e-mails he sent that may have placed his life in jeopardy. After the police took him into custody, Hyde “explained that he was scared due to several painting workers and landscape workers trying to do harm to him because they weren’t working.”

He also said his computer was hacked by the Secret Service.

Hyde was placed in a medical facility under Florida’s Baker Act, which permits a police officer to involuntarily commit a person for up to 72 hours in a mental health treatment facility under certain conditions.

On Wednesday, Connecticut GOP chairman J.R. Romano called on Hyde to end his bid for Congress.

But Hyde has rejected that call. In his Wednesday night interview on “America this Week,” Hyde called his Democratic rival, Rep. Jahana Hayes, D-5th — along with House Intelligence Committee Chairman Adam Schiff and California Sen. Kamala Harris — “the worst Americans.”