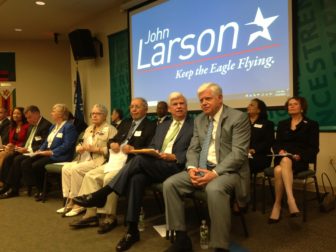 It’s been 14 years since a Republican unseated a Democratic congressional incumbent in Connecticut, and eight since the GOP’s last congressman in the state, Chris Shays, successfully defended his seat.

But that isn’t stopping Republicans from competing with each other, often spending their own money, in the state’s five U.S. House districts for the chance to try again.

Democrats re-nominated all five U.S. House incumbents Wednesday night without opposition: John B. Larson in the 1st, Joe Courtney in the 2nd, Rosa DeLauro in the 3rd, Jim Himes in the 4th and Elizabeth Esty in the 5th.

Former U.S. Sen. Chris Dodd, now president of the Motion Picture Association of America, was among those offering nominating speeches for Larson at Goodwin College in East Hartford.

“It’s been a long time. Nice to be home,” Dodd said at a event with the relaxed vibe of a family reunion. Larson is seeking his ninth term representing Connecticut’s most Democratic district.

While the Democrats were scattered across the state Wednesday, the GOP will endorse five challengers Friday at nominating conventions to be held simultaneously at the Mohegan Sun, where delegates will gather again Saturday to endorse a candidate for governor.

The GOP field of challengers offers little in the way of electoral experience or independent financial backing, with exception of Dan Debicella in the 4th District. Debicella is a former state senator trying to unseat Himes for the second time in three elections.

In the 5th, Mark Greenberg failed the win the GOP nomination in a five-way race two years ago, but he has the support this year to win a two-way race and the chance to unseat Esty, a first-term Democrat, in the state’s most competitive congressional district.

Three candidates are competing in the 4th District, two in the 1st, 2nd and 5th. Only one Republican is running in the 3rd.

Matthew M. Corey, 50, of Manchester is the owner of a high-rise window cleaning company – his campaign web site says he still can be seen dangling from the exterior of Hartford skyscrapers — and McKinnon’s, an Irish pub in downtown Hartford. He is U.S. Navy veteran deployed to Beirut in 1983. He ran for the same seat in 2012 on the Independent line.

John M. Phillips, 26, of Hartford is a social studies teacher and tennis coach at Cromwell High School. He calls himself “bold, passionate and unapologetically conservative.”

Neither reported raising any money by the pre-convention filing deadline of late April. Larson had raised $1 million and had $449,611 cash on hand.

Lori Hopkins Cavanagh, 54, of New London is a Realtor and the host of a weekly radio program, Win at Real Estate. She was an unsuccessful mayoral candidate.

Evan Evans of Colchester is a loan officer for a mortgage company and a major in the National Guard. He provided $10,000 of the $11,885 he’s reported raising. As of April, he had just $353 in available cash.

In a year in which many gun owners mobilized politically in opposition to the post-Newtown gun control law, both candidates describe themselves as strong protectors of the Second Amendment

Courtney, the Democrat who unseated Republican Rob Simmons in 2006, had $908,556 in available cash.

James E. Brown, 45, of Stratford is a high school math teacher and track coach, who stopped teaching last year. He is the only candidate seeking the GOP nomination. Like his colleagues in the 1st and 2nd, he is on a budget: He has provided $2,000 of the $5,771 raised and had $4,237 cash on hand in April.

Stephen M. Packard, 32, of Hamden, who has worked in information technology and web design, is running for the second time. The candidate has reported raising $505, including $395 from the candidate.

She was elected to the open seat in 1990, succeeding Democrat Bruce Morrison.

Joe Bentivegna, 57, of Fairfield is an ophthalmologist who dropped out of the race on May 10, then jumped back in two days later. He ran for the U.S. Senate 20 years ago, losing the GOP primary to Gerald Labriola, the father of the current Republican state chairman, Jerry Labriola Jr.

Debicella, 39, of Shelton is a former two-term state senator who was most recently employed by Bridgewater Associates, the hedge fund based in Westport. He had raised $536,468 and had $337,300 cash on hand.

Carl Higbie, 31, of Greenwich is a former Navy SEAL and the author of a memoir, “Battle on the Homefront, a Navy SEAL’s Mission to Save the American Dream.” He reported raising no money.

Himes is the Democrat who unseated Republican Chris Shays in 2008. He has raised $1.6 million and had $1.4 million in available cash.

Mark Greenberg, 60, of Litchfield is a successful businessman who self-funded a congressional campaign in 2012 and is doing so again this year.

Social conservatives say he could be one of the strongest anti-abortion candidates to win a congressional nomination in Connecticut, but his campaign web site makes no mention of abortion. Greenberg has emphasized the economy and repeal of Obamacare.

Sal Lilienthal, 47, of Kent is the owner The Bicycle Tour Company, also based in Kent. He spent 10 years on the professional cycling tour, providing technical support. He is a Revolutionary War buff and co-author of a book about the war in Connecticut. He has provided $18,020 of the $32,619 raised by his campaign. He had $9,035 in available cash.

Esty won the open the seat in 2012, succeeding Democrat Chris Murphy, who was elected to the U.S. Senate. She has raised $1.6 million and had $1.2 million in available cash.

Correction: Based on a list of active candidates provided by the state Republican Party, this story originally omitted Packard.