Joe Visconti and the gun issue are both sticking around 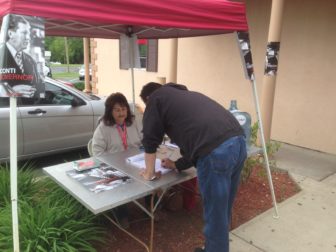 Mike Joeckel of Bristol signs a petition for Joe Visconti outside Hoffman Guns.

Newington — Joe Visconti’s path to the Republican primary for governor runs past the front door of Hoffman Guns, where his campaign sets up under a red canopy most mornings, collecting signatures on a clipboard and cash donations in a big jug.

On a gray and unseasonably cool day, Visconti is sheltering inside the foyer. He is close by the indoor pistol range, ignoring muffled gunfire as he monitors a Facebook argument on his smart phone about a signature issue: the right to own and carry firearms.

Visconti, 57, is a Tea Party activist and former one-term councilman in West Hartford. He captured only 1.76 percent of the GOP convention vote, but he’s a lot like the gun issue. Neither will go away, and no one is quite sure what that means for the rest of the Republican field.

“I’m trying to stay in it as long as I can to keep certain debate issues going,” Visconti said.

“I wouldn’t be in the race if I thought Tom could actually pull this off,” Visconti said. “He’s got to address the unions. Right now, they fear him.”

Visconti said he either will force Foley to be a better candidate — or he just might beat him. The latter suggestion seems a stretch, given Visconti’s lack of money and the things money buys in politics, primarily staff, advertising and name recognition.

Foley, a Greenwich businessman who was the 2010 nominee, won the endorsement of the GOP convention on May 17. Danbury Mayor Mark Boughton and Senate Minority Leader John P. McKinney of Fairfield each had more than 15 percent of the convention vote, automatically qualifying them for the August primary.

Visconti is pursuing the alternate route: Gathering the signatures of 8,190 GOP voters. His deadline is 4 p.m. June 10.

On this morning outside Hoffman Guns, Visconti picked up 20 more signatures in less than two hours. One problem: only Republicans can sign his petitions, and many of the shoppers are unaffiliated.

“I really do hope you win. I really do,” said a shopper, who left Hoffman’s with a box of Federal shotgun shells under his arm, ammo for an upcoming clay-plate competition. “You tell it like it is, God bless you.” 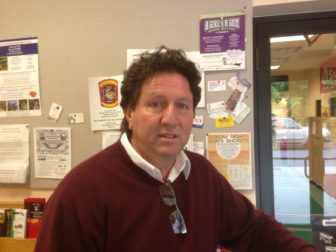 The man, a retired crane operator, told a reporter he did not want to be quoted by name. But he could offer Visconti only a compliment, not his signature. He was an unaffiliated voter, and only Republicans can help him get on the ballot.

Visconti said his campaign sets up on Thursday, Friday and Saturday nights at the Cadillac Ranch, a country bar in Southington. There, he said, his supporters work to register unaffiliated voters as Republicans.

“I can actually win this,” Visconti said.

Guns are his high-profile issue, but Visconti said he considers protecting public education against the inflexible Common Core standards to be more important. He said the issue provides common ground for the disaffected left and right.

Visconti has been a union stagehand, a member of Local 84 in Hartford. He describes himself as a Republican who can connect with union workers. He now is a general contractor.

“That’s my green pickup truck out there. I’m not a Scott Brown pretend pickup guy,” he said, a reference to the Bay State politician who won Ted Kennedy’s U.S. Senate seat in a special election. Brown’s ads showed him driving a pickup truck.

Visconti said he understands well the deep reservoir of voter anger present in 2014, especially by gun owners who object to the post-Newtown gun law, which banned the sale of military-style weapons, such as the AR-15 used in the attack, and large-capacity magazines.

The law allows gun owners to legally keep the guns, but only if they registered them.

Visconti is the only candidate running on a promise to seek the repeal or significant revision of the law.

McKinney helped negotiate the bipartisan gun-control package adopted last year in response to the Sandy Hook school massacre in Newtown. Until recently, Boughton was a member of Mayors Against Illegal Guns. Both have drawn the ire of gun owners.

Foley has reached out to gun owners, addressing a gun rally outside the Capitol. But he does not promise to seek repeal or revision.

Gun owners wonder what is coming next, Visconti said. The Connecticut State Police will have the technology to eventually search for residents who bought AR-15s, but never registered them, he said.

“The first step would be to send a letter,” Visconti said. “We don’t know after that.”