But as it came time to finalize the state budget this spring, money was getting tight. And so, lawmakers found the funds for preschool and the other programs by turning to a familiar escape hatch: the settlement money from tobacco companies.

Connecticut has received nearly $2 billion over the past 15 years as part of a legal settlement meant to compensate states for the toll of tobacco.

But, to the consternation of anti-tobacco advocates, the state has spent only a tiny fraction of it to curb smoking, the cause of an estimated 4,700 deaths here each year.

Instead, lawmakers have repeatedly used the money as a crutch to help balance the budget. Even the money designated for a special fund for anti-tobacco efforts and other health programs has repeatedly been raided by lawmakers to cover other expenses.

Bryte Johnson, the government relations director for the American Cancer Society Cancer Action Network, said the programs lawmakers funded this year with tobacco settlement money address worthy causes. But none address problems that kill as many people as smoking does, he said.

Since the tobacco settlement, he said, “We’ve been left behind every single year.”

But while Johnson and others push for the state to spend more on anti-smoking efforts, several fiscal projections suggest even the modest sums now devoted to that cause could be imperiled in the coming years.

Connecticut gets lots of money from smoking.

A $3.40-per-pack levy on cigarettes and small taxes on snuff and other tobacco products are expected to bring in about $375 million this fiscal year.

That money goes into the general fund, which pays for the vast majority of the state’s operating costs — including health care and social service programs that incur expenses because of smoking.

A second pool of money stems from a lawsuit Connecticut and 45 other states settled in 1998 with the nation’s four largest tobacco manufacturers. Besides agreeing to curtail certain marketing practices, the industry agreed to pay — in perpetuity — to offset the cost of treating people with smoking-related illnesses.

While the settlement didn’t require the money be used on anti-smoking efforts, Connecticut legislators created the Tobacco and Health Trust and entitled it to all settlement funds not designated for some other purpose. But since 2000, only about 10 percent of the nearly $2 billion Connecticut received from the settlement has gone to the trust — just under $200 million.

And even money that’s gone into the trust fund hasn’t always been available for anti-smoking efforts. Six times in the past decade, lawmakers took the trust fund’s money to help balance the budget — a total of more than $113 million.

Officials have also assigned the trust fund to pay for other programs, some of which have little relationship to tobacco, like $13 million for then-Gov. M. Jodi Rell’s Charter Oak Health Plan or $3.5 million over several years for a health information sharing network at the UConn Health Center. 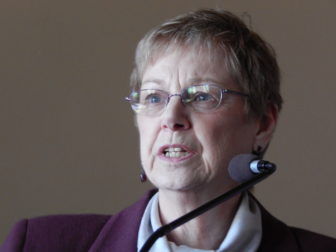 Pat Checko, a longtime anti-tobacco advocate and member of the Tobacco and Health Trust Fund.

“There’s been a long history of, I don’t think there’s any other word to use but abuse of the fund for its intended purposes,” said Pat Checko, who has served on the trust fund’s board since 2000. She also serves on the board of the MATCH (Mobilize Against Tobacco for Connecticut’s Health) Coalition.

The state faces significant expenses associated with smoking. Medicaid alone pays $430 million in health care costs related to smoking, according to the state Department of Public Health. That means the effects of smoking have made the budget harder to balance.

But advocates say not enough is spent on helping smokers to quit or preventing kids from starting.

“We have a significant amount of money that’s coming in from smokers who are paying taxes on this product they are addicted to, and we should be providing services and resources to help them quit,” said Ruth Canovi, public policy manager for the American Lung Association of the Northeast.

“There seems to be a feeling that smoking and tobacco use isn’t as large of a public health issue as it was in past decades,” said John M. Bailey II, state director of government relations for the American Heart Association. “But smoking is still the nation’s number one cause of preventable death.”

Who smokes in Connecticut

Smoking in Connecticut has become largely a habit of the poor, those with the least education and people with mental illness.

Overall, 16 percent of Connecticut adults reported that they smoked in a 2012 survey, the latest the state Department of Public Health has made available. That’s more than 400,000 adults. And an estimated 27,000 middle and high school students smoked in 2011.

More than one in three people in the state with a mental illness smokes, according to federal figures. And among people entering Connecticut jails and prisons, 60 to 70 percent smoke, according to a state correction official.

Close to two-thirds of smokers want to quit.

Some are Jane Reardon’s patients — people with lung disease, some with such shortness of breath they’ve had to quit their jobs and stop participating in family activities.

“Most of them desperately want to quit smoking but lack the resources to do so on their own,” said Reardon, a nurse practitioner at Hartford Hospital who specializes in pulmonary care. “They’re not weak or unmotivated people. But it speaks in my eyes to the power of tobacco addiction.”

Reardon described her patients to the Tobacco and Health Trust Fund’s board during a recent public hearing. She asked for additional funds for her hospital’s smoking cessation work — and for the state to devote more of the settlement money to helping people to quit.

Where the money goes

But legislators have been finding new ways to spend the settlement dollars that don’t include anti-tobacco programs.

Last month they dipped into the settlement pool for several initiatives, including:

Checko, who sits on the Tobacco and Health Trust Fund board, said she doesn’t have a problem with using the settlement money — not the tobacco trust fund — for non-health purposes. But other anti-tobacco advocates worry when the pool that feeds the trust fund gets put toward other things.

Since 2000, The Tobacco and Health Trust Fund has received a little under $200 million.

The trust fund’s board has only put about $24.5 million toward anti-tobacco programs since 2003, though. It’s funded programs including a telephone QuitLine for smokers trying to kick the habit and anti-tobacco marketing efforts. The board is expected to award another $3.5 million in the coming months.

The rest of the money, close to $170 million, has been either taken for the general fund to balance the state budget or committed to fund programs by legislators, not the board that oversees the fund.

Some of those earmarks have funded asthma programs and Medicaid coverage of smoking cessation.

But others have little to do with tobacco. Legislators have assigned the fund to pay for autism-related programs and a program that gives seniors information about social services. Since 2010, $500,000 or more a year has gone to support regional emergency medical services councils.

“I think the sad thing is the public really believes that that money is being used for what it’s supposed to be used for, because they really don’t know, and many of the legislators don’t really know the difference between the settlement money and the Tobacco and Health Trust Fund,” Checko said.

This year, the Centers for Disease Control recommended that Connecticut spend $32 million annually on anti-smoking efforts. That’s more than the trust fund’s board has been allowed to dole out in total since it started more than a decade ago.

“I think it’s important for [the trust fund board] to have a louder voice, because that’s really one of the main things that money was meant for.”
Sen. Beth Bye, D-West Hartford
Co-chairwoman of the Appropriations Committee

Few states spend even half of what the CDC recommends they spend on anti-smoking efforts, according to the advocacy group Tobacco Free Kids. But Connecticut ranks among the lowest.

Sen. Beth Bye, D-West Hartford, who began this year as co-chairwoman of the budget-writing Appropriations Committee, said that while tough choices had to be made during lean times, most of the dollars spent outside of the trust fund board’s purview had some connection to health care.

“I think it’s important for them to have a louder voice,” she said, “because that’s really one of the main things that money was meant for.”

But carving out more funds for anti-tobacco programs could become more difficult in the coming years.

Settlement payments are projected to drop significantly over the next few years.

Further complicating matters, nonpartisan analysts are projecting a nearly $1.4 billion budget hole in 2015-16, the first new budget after the November elections. That gap, almost 8 percent of annual operating costs, typifies the conditions that led legislatures and governors to raid tobacco funds in the past.

Sen. Rob Kane of Watertown, the ranking Republican senator on the Appropriations Committee, predicted that state government would divert tobacco funds away from anti-smoking programs — and from health care in general — after the election, if Democrats retain control of the governor’s office and legislature.

“They can’t make the hard decisions” to cut spending elsewhere, he said. “I can’t see any change in their philosophy.”

Legislation last year suspended the activities of the tobacco and health trust fund board for 2016, although a measure passed this year restores the board’s ability to meet that year.

Gian-Carl Casa, spokesman for the governor’s budget office, said the Malloy administration has no plans to eliminate the Tobacco and Health Trust Fund board.

“To suggest anything else is mere speculation, and speculation that’s not based on what we actually did this year,” he said.

Casa added that the governor has taken several steps to discourage smoking among young people, including signing legislation to ban the sale of e-cigarettes to minors and the sale of loose cigarettes.

Even so, anti-smoking advocates say they’re concerned about the future of the dedicated fund for anti-smoking and health efforts.

“There’s always the fear, especially in bad budget years, of which we’ve had nothing but in the last few years,” said Johnson, the Cancer Action Network lobbyist. “Every year we have to fight to make sure that funding is provided.”

“There is definitely a fear that they may just zero out the Tobacco and Health Trust Fund altogether,” he added.

But ironically, Johnson said, there’s one thing working in the favor of the trust fund’s continued existence.

“Because a lot of the money in the trust fund is allocated to non-tobacco-related programs, it broadens those of us that advocate strongly that the fund continue to exist,” he said.

The number of people who died in Connecticut from drug overdoses in 2019 was the most the state has recorded in a single year, even after a dip in deaths in 2018.

A total of 1,665 Connecticut children under age 6 had lead poisoning in 2017, a drop of almost 17% from the year before and the largest one-year decrease in five years, according to a just-released report from the state Department of Public Health (DPH). But more children showed higher levels of the toxin in their blood than in 2016, […]