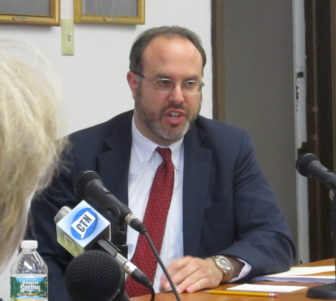 The exposure of one man’s secrets has cast a pall over a well-regarded charter school in Hartford, endangered plans for a new school in New Haven and raised questions about the quality of the state’s oversight of charter schools that educate 7,000 students in Connecticut.

The state Board of Education authorized an investigation Monday into how Michael Sharpe came to be chief executive of Hartford’s Jumoke Academy and a related management company without the state discovering he has a criminal record or that his claim of a doctoral degree was false.

“This is  a pretty unique situation. Michael Sharpe had been tremendously successful at Jumoke Academy since about the year 2000,” said Rep. Andy Fleischmann, D-West Hartford, co-chairman of the Education Committee. “So I think it’s fair to say it came as a big surprise to many of us that someone who had achieved so much would be claiming to have a degree that he lacks and have a past.”

The inquiry comes as charter schools, once celebrated as laboratories of urban educational achievement and innovation, increasingly face a backlash from teachers’ unions and political figures ranging from the mayor of New York City to a third-party candidate for governor of Connecticut.

“I think it’s an important moment,” said Stefan Pryor, the state commissioner of education, himself a co-founder of a New Haven charter, the Amistad Academy.

In New York, Gov. Andrew Cuomo has defended charter schools against the criticism of the new mayor, Bill DiBlasio. In Connecticut, Gov. Dannel P. Malloy’s support of charter schools and his appointment of Pryor as commissioner is an issue in the first-term Democratic governor’s re-election.

Anger over charter schools and the private non-profit companies that run them is helping fuel the third-party gubernatorial campaign of Jonathan Pelto, an education blogger and former Democratic legislator.

To Pelto, the exposure of Sharpe’s record by The Hartford Courant is evidence of the shortcomings of a state education bureaucracy overly sympathetic of charter schools.

“I think it’s evidence there is no oversight, no meaningful oversight,” Pelto said.

Jennifer Alexander, the chief executive officer of the pro-charter group, ConnCAN, said she welcomed an examination of how it oversees charter schools, prompted by the Jumoke and FUSE scandal.

“I think it is an important moment that signals a need to revisit and update Connecticut’s charter law so that it keeps pace with best practices nationally, including clarity around areas of accountability and transparency — but, I think, also flexibility and funding,” she said.

Unquestionably, the scandal has sent ripples from Hartford, the home base of Jumoke, to New Haven and Bridgeport, cities where its related management company, Family Urban Schools of Excellence, or FUSE, was working to launch one new school this fall and oversee the turnaround of another.

“This is  a pretty unique situation. Michael Sharpe had been tremendously successful at Jumoke Academy since about the year 2000,” said Rep. Andy Fleischmann, D-West Hartford, co-chairman of the Education Committee. “So I think it’s fair to say it came as a big surprise to many of us that someone who had achieved so much would be claiming to have degrees that he lacks and have a past.”

Jumoke was hired by the Hartford school system to manage the struggling Milner School, but the city recent recently removed the Jumoke team. It also managing an other turnaround school, Dunbar in Bridgeport.

State Board of Education members questioned if the Booker T. Washington School in the Newhallville section of New Haven still can open this fall after the sudden loss of FUSE as its management company. The school’s founders have severed its ties with FUSE.

FUSE and Jumoke lost three top executives after The Courant’s story. First, Sharpe resigned, ending his association with Jumoke, an academy founded by his mother, Thelma Dickerson, and still staffed with various relatives. Two others then quit: Leeanne Masterjoseph, the chief academic officer; and Andrea Comer, the chief development officer.

Sharpe took over Jumoke in 2003 after the retirement of his mother. Dickerson, a former Hartford school board president, died in February 2012 at age 87, the same year that Sharpe formed FUSE, an entity that was granted non-profit status by the IRS this year.

Pryor said Monday that the state Department of Education would immediately take steps to develop policies to prevent nepotism and conflicts of interest in the management of charter schools, as well as background checks for employees.

Pryor said the investigation into Jumoke and FUSE by an outside lawyer, Frederick L. Dorsey, also would look at the policies and practices of the state Board of Education and Department of Education.

“This is a partnership,” said Stephen Wright, a state Board of Education member. “We own this mistake, and we’re going to correct it.”

“Charters are one small part of the public school system, and the governor believes they play an important role.  However, the overall goal is to make each and every public school one that is high performing, which is why he has increased funding for education by hundreds of millions dollars over the last four years.  We look forward to the results of SDE’s investigation.”

The state regularly assesses the performance of charter schools, placing a premium on a wide array of measures of academic progress, including attendance, disciplinary problems and test scores.

Charters are reviewed for renewal every three to five years.

According to information provided by the state Department of Education, six charter schools have closed since 1999, two as the direct result of state action: