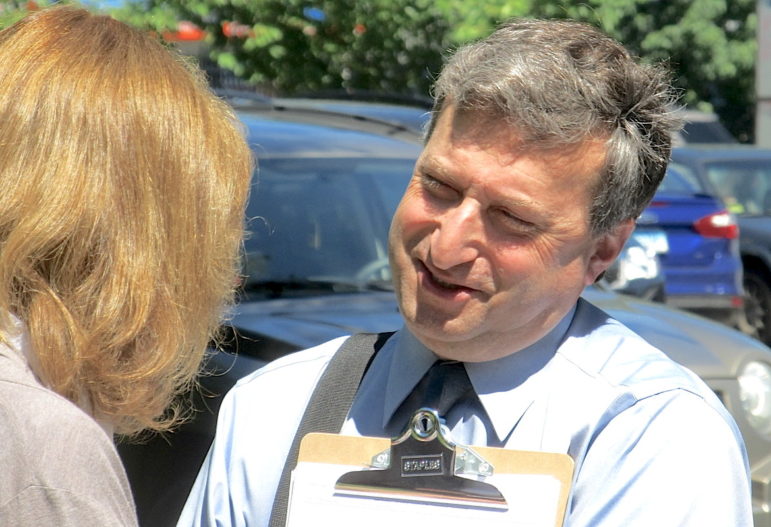 Part Two in a weekly series focusing on Connecticut’s five gubernatorial candidates and their respective plans for reinvigorating the state’s economy and closing a $1.4 billion budget deficit projected for after the election.

Former state Rep. Jonathan Pelto doesn’t have any trouble standing out from the rest of the 2014 gubernatorial candidates.

The rest of the field has ruled out tax increases. For Pelto, who hopes to petition his way onto the November ballot, they are unavoidable.

Gov. Dannel P. Malloy, a Democrat, insists the post-election budget deficit effectively isn’t real and poses no threat.  His Republican challengers insist it is very real, but not so imposing that it will stop them from cutting taxes next spring.

“The insiders have agreed that the best way to deal with Connecticut’s financial problems is to lie and mislead,” Pelto told The Mirror. “It’s a good thing that their statements aren’t made under oath, because our prisons would be full of politicians who perjured themselves by intentionally lying during the campaign.”

A 10-year member of the General Assembly and former strategist for the state Democratic Party, Pelto now finds himself outside the establishment. With his public policy and politics blog, “Wait What?” he has become one of the administration’s loudest critics.

“We are going to have to deal with this massive financial crisis that continues to burden the state,” Pelto said. “I believe that I can play a role as the truth-teller in this campaign when it’s clear that neither the Democrats nor the Republicans are willing to tell the voters the truth.”

The budget deficit is very real

Perhaps the Number 1 Truth Connecticut must face, Pelto said, is that it hasn’t stabilized state government finances since Gov. M. Jodi Rell and the legislature left a record-setting $3.7 billion deficit to be solved after the last recession.

According to the legislature’s nonpartisan Office of Fiscal Analysis, a $1.4 billion shortfall remains built into the first new budget after the November election – a gap equal to about 7 percent of annual operating costs and about 40 percent the size of Rell’s deficit.

But Connecticut also has emerged from The Great Recession with arguably the nation’s most sluggish recovery, having regained only about half of the 121,000 jobs it lost. That, coupled with a Wall Street-based financial services sector whose earnings haven’t returned to pre-recession levels, has left the state’s coffers lighter than Democrats or Republicans expected.

“The fallacy that Malloy has put the state on sound footing” is perhaps the biggest problem facing state government today, Pelto said. Not that the current governor caused all of these problems, but rather that he missed a golden opportunity to put Connecticut on a much healthier path.

Asking the wealthy to pay more

Though Malloy signed more than $1.5 billion in new taxes into law in 2011 – with just over half of those funds coming from a far-ranging income tax hike – the top marginal rate grew from just 6.5 to 6.7 percent.

New Jersey and New York both have top rates just under 9 percent. The wealthiest households in New York City face a rate that tops 12.6 percent between city and state income taxes combined. And while Massachusetts levies a flat 5.2 percent rate on most income, it charges 12 percent on capital gains.

Pelto said he would add several points to the top rate on income in excess of $1 million.

“I don’t buy the notion that a 2- or even 3-percentage-point increase will force millionaires to flee the state. We would still be more than competitive,” he said, recalling how Malloy had dismissed a similar approach proposed in 2011 by a coalition of labor and social service advocacy groups.

The governor said in his 2011 budget address that “while I do believe in a progressive income tax, I do not believe that we should punish success, or wealth.”

“I’ve never heard a Democrat come up with such an outrageous statement,” Pelto said. Middle class people are very successful… but it’s OK to tax the middle class? The ability to pay should be the guiding force in a Democratic system of taxation.”

Roy Occhiogrosso, a political consultant who ran Malloy’s 2010 campaign and who served as his chief policy advisor in 2011 and 2012, declined to comment on Pelto’s statements.

Brennan predicted many of those operations would look to move to a lower-cost state. “You don’t want to export wealth,” he said. “You want to keep wealth in Connecticut.”

And regardless of neighboring states’ rates, Connecticut’s top income tax rate has risen from 5 to 6.7 percent in five years already, Brennan noted.

“Every study shows businesses are looking for some measure of stability” he said, adding predictability is crucial for companies to feel confident enough to add jobs. “There’s real concern about more tax increases coming.”

But Pelto said he believes something else is coming – a mandate to finally correct an unconstitutional system for financing public school education.

A coalition of cities and towns filed a lawsuit on behalf of local students back in 2005, arguing that the state’s Education Cost Sharing grant program – its chief means of support local schools – didn’t meet the constitutional mandate to provide every child with a comprehensive education.

That case goes to trial before the state Supreme Court this fall and Pelto said he believes Connecticut ultimately could be forced to increase its $2 billion ECS program by anywhere from 35 to 100 percent.

“We’re not going to get there in a year or two but we’re going to need a new formula now,” he said.

But even if Connecticut is given a decade or longer to gradually increase its education funding, that potential mandate – coupled with a post-election deficit, a sluggish recovery and long under-funded public-sector employee retirement benefit programs – should end any delusions of state tax cuts on the horizon, he said.

Not all of Pelto’s plan rests with tax increases, though.

The former legislator said he opposes investing hundreds of millions of dollars in state funding in “already successful” corporations, focusing economic development funds on vocational technical schools, other job training programs, and in operating assistance to public colleges and universities to stem the recent surge in tuition and fees.

Pelto added he also would review the nearly $4 billion in sales tax exemptions currently on the books.

While he would keep those traditional exemptions for household needs – gasoline, groceries, medications and low-cost clothing – the state should consider repealing the rest.

“You exempt out the few things people absolutely need, things that provide a critical life benefit,” he said.

Most of the additional revenue from these increases would be returned to consumers by lowering the overall sales tax rate of 6.35 percent, while the rest also could be used to help close the deficit, he said.

“We’re crushing the middle class,” Pelto added. “The only way we will deal with that is to shift the burden away from property taxes and consumption and onto the income tax.”