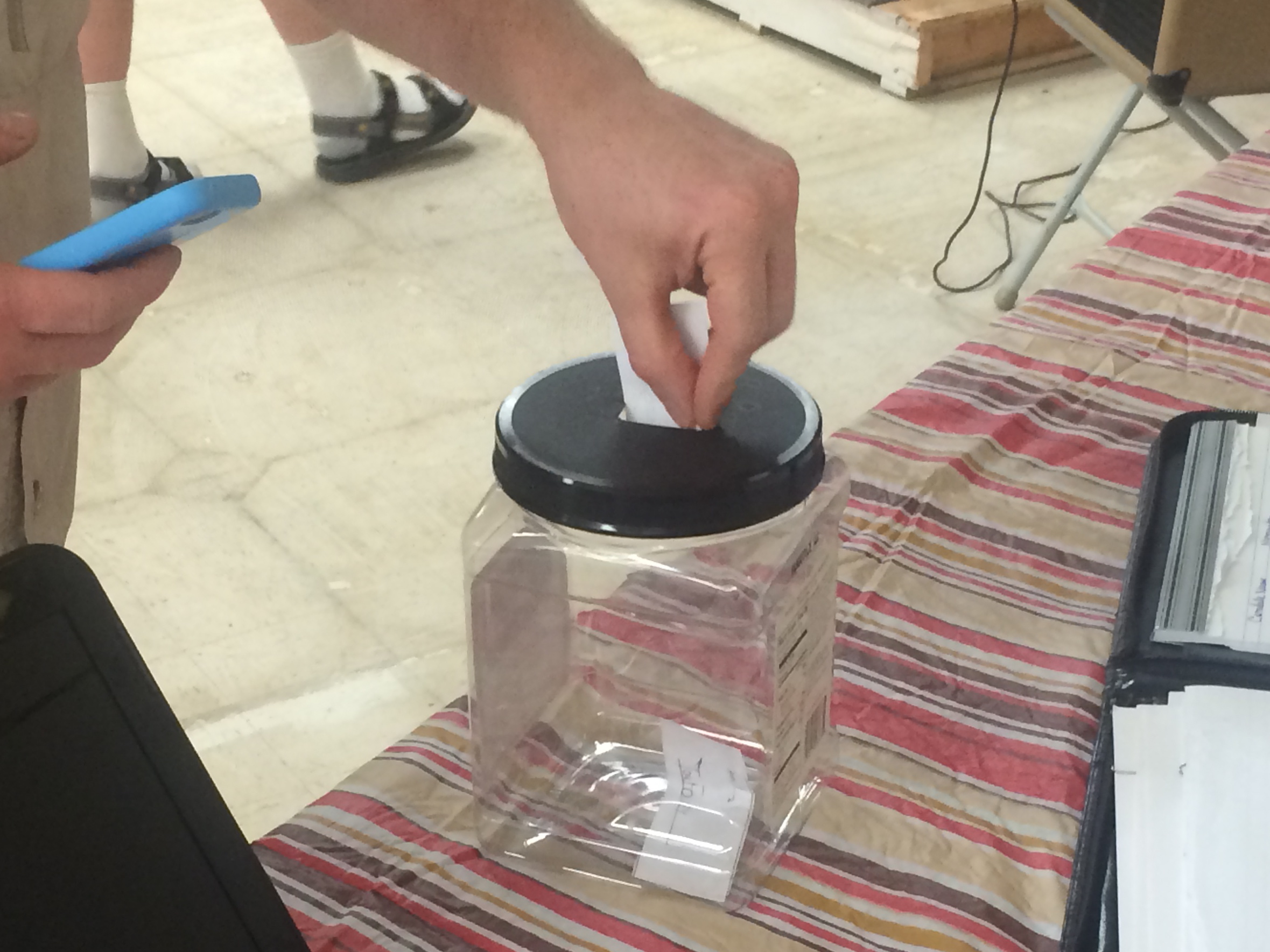 A vote cast at the Independent Party caucus.

Watertown – The ballots were folded slips of paper. The ballot box was a clear plastic jar that once held “H.K. Anderson peanut butter-filled nuggets,” 130 calories a serving. Nothing fancy, but it produced for Republican Tom Foley a tasty prize — a second line on the November ballot for governor.

Four years after nominating its own ticket for governor, the Independent Party surrendered a measure of its independence Tuesday night, voting in a caucus to cross-endorse Foley and the rest of the GOP statewide ticket. It was a small step in the life of a minor party, but possibly a leap for Foley.

The endorsement gives Foley equal footing on the ballot with Gov. Dannel P. Malloy, the first-term Democrat cross-endorsed by the Working Families Party, whose line produced the margin of victory and then some for Malloy over Foley in 2010.

Foley bested a Trinity College professor, John Mertens, who unsuccessfully pleaded with members of a 15,000-member party already divided by a legal battle over rules, legitimacy and control to truly stay independent. The vote means Foley will appear on two ballot lines in November.

In a vacant storefront between a Marshalls and an Adams food store, voters lined up at a table, wrote either Foley or Mertens on slips of paper and deposited the ballots in a slot cut into the jar lid. The count went quickly, 24 ballots in Foley’s pile, 16 for Mertens.

Foley thanked the caucus attendees, then signed a form that acknowledged his acceptance of the endorsement.

Four years ago, Tom Marsh, a Republican local official, got 17,629 votes for governor on the Independent line — surpassing the 1-percent threshold necessary to guarantee the party a ballot line this year without a petition drive. Malloy won 26,308 votes on the Working Families Party line. His plurality: 6,404 votes, the thinnest margin of victory in a Connecticut race for governor in 56 years.

Foley said he thought that Marsh, who had no campaign budget, perhaps cut into his vote total by 2,500 votes, not enough to make a difference.

“I think people who voted on that line in that race probably didn’t like either me or now-Gov. Malloy,” Foley said.

This year, Foley was nominated by Cicero B. Booker Jr., who was Marsh’s running mate in 2010. The party is split, with factions from Danbury and Waterbury divided over who is the rightful heir to the Independent banner.

Two other candidates, Republican Joe Visconti and Democrat Jonathan Pelto, are trying to join Malloy and Foley on the ballot as petitioning candidates. The deadline is 4 p.m. Wednesday for local clerks to finish checking their signatures, then send them to the secretary of the state to be tallied, a process expected to stretch past the weekend.

Pelto met weeks ago with some Independent Party members, exploring winning their endorsement. 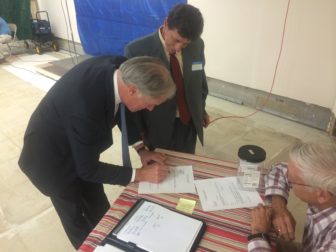 Tom Foley signs a form accepting the endorsement of the Independent Party.

“They were very interested, then it turned out the Danbury Republicans are going to pack the caucus meeting, and they are going to give it to Foley,” Pelto said earlier Tuesday.

It is unclear if Pelto will qualify for the ballot as a petitioning candidate, which requires 7,500 signatures. Visconti says he has enough.

Foley declined to speculate Tuesday night which would have been the more favorable scenario: Foley on two lines, possibly without Pelto on the ballot to draw votes away from the governor; or Foley and Pelto each with one line.

“You can over-think this stuff,” he said, smiling. “I’m grateful to have the support of the Independent Party. I hope that my being on their line encourages people who want to support independent candidates, that it’ll bring more people to engage and be interested in the race and vote on Nov. 4.”

Pelto said the party could have had it both ways by endorsing him to ensure he is on the ballot. If Pelto qualified on his own, he would have surrendered the line to Foley.

“They are convinced that having Foley on the ballot twice is more important. They didn’t understand, if they put me on and I didn’t need it, I would have stepped down” as the Independent candidate, Pelto said.

Mark Greenberg, the GOP candidate for congress in the 5th District, also was endorsed Tuesday.