Foley, Malloy vow to spend more on transportation, but offer no plans to pay for it

North Haven – While Gov. Dannel P. Malloy and Greenwich businessman Tom Foley both vowed Monday to spend heavily on transportation, neither gubernatorial contender outlined any plans to pay for these investments.

Also at Monday’s forum, Foley said he would consider shutting down CT fastrak commonly known as the New Britain-to-Hartford busway, if the project’s annual operating drain on the state budget is too high.

“This stuff is a passion to me,” Malloy told more than 200 transportation advocates gathered at the Best Western Plus in North Haven.

Malloy, who conceded Connecticut must expand its transportation spending, nonetheless insisted he has outspent every administration dating back to Gov. William A. O’Neill’s in the early 1980s.

“This administration is committed to build out the infrastructure of this state,” Malloy said.

“I know the difference between spending and investing,” Foley said, adding that while his plan is to hold overall state spending flat for the next two fiscal years, “there are areas where we need to invest more.” 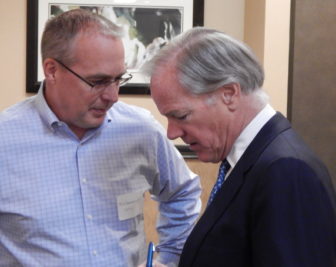 Increasing transportation spending is crucial, he said, not just to create construction jobs, but to enable all businesses to move their goods or employees swiftly through Connecticut.

But neither Foley nor Malloy addressed the fact that, according to the legislature’s nonpartisan Office of Fiscal Analysis, the state budget’s general fund is facing a $1.4 billion deficit, about 7 percent of annual expenses, next fiscal year.

Both candidates not only have ruled out tax hikes, labor concessions and layoffs – but also have proposed new tax cuts. And both also conceded Monday that federal transportation grants to states may be shrinking in the near future.

So while they both promises to be frugal managers of the state budget – and to prioritize transportation – some advocates remained skeptical afterward. Don Shubert, president of the coalition of labor trades and builders known as Connecticut Construction Industries Association, said afterward that, “I think it is relatively easy to talk about the importance of investing in Connecticut’s transportation system. The real challenge is figuring out how do you pay for it?”

Shubert added that many advocates remain worried about the fate of federal funding, and said Connecticut’s governor in 2015 may have to adjust quickly to diminishing resources for transportation.

Perhaps the biggest transportation initiative of Malloy’s administration, the busway linking New Britain and Hartford, would be in jeopardy if Foley wins.

The GOP nominee has said repeatedly Connecticut should not have invested in that project, and when asked by reporters Monday whether he would maintain operations of CT fastrak, Foley said it would be a tough decision.

Given the huge investment Connecticut has made so far, “it wouldn’t make sense to shut it down,” Foley said. More than $450 million in federal funds and $110 million from the state have been spent to construct the busway.

But, he said, “I don’t know if we should be subsidizing the operation of that route,” adding that eliminating red ink and stabilizing the state budget has to be his top priority. “There are many (transportation) alternatives for people between New Britain and Hartford.”

According to the state Department of Transportation, it will cost about $10 million annually to operate CT fastrak, which would add about 130,000 hours of bus service per year to the Greater Hartford area. Only 25 percent of that $10 million would come from bus fare receipts.

But Malloy said the busway already is stimulating commercial and residential, transit-oriented development in the region, including an $80 million residential high-rise on Main Street in Hartford.

Malloy added that all aspects of Connecticut’s transportation network are subsidized, and that buses provide a crucial service for families in the Greater Hartford area.

“Has he (Foley) ever seen a bus?” the governor asked afterward. “He does not understand people who take buses.”

Tolls not completely out of the question

Both candidates left the political door open a crack when asked if they would support restoring tolls to Connecticut highways, but also set out numerous conditions.

Foley said he would consider tolls only as a means to reduce traffic congestion, and not as a source of new revenue – even for the state budget’s Special Transportation Fund,

“I do not support additional sources of revenue for the state of Connecticut,” he said.

That means if tolls are added to highways – and therefore increase revenues for the state’s coffers – Foley would insist those receipts be used to lower gasoline taxes or some other levy by a corresponding amount.

The governor, who has said repeatedly that he isn’t proposing tolls, said he would consider them if federal transportation aid to states drops dramatically.

“If there’s a doomsday, we’re going to have to look at this,” Malloy said, adding he would insist upon an amendment to the state Constitution to try to prevent toll receipts from being used for non-transportation purposes.

But even if that happens, the governor quickly added, toll revenues would have to support more than basic infrastructure maintenance. If motorists must pay tolls, then Connecticut also must use some of those funds to widen or extend highways and launch other new projects that would reduce congestion.

Monday’s forum was scheduled after both Malloy and Foley accepted a challenge to tackle transportation questions posed by Moving Transportation Forward in CT.