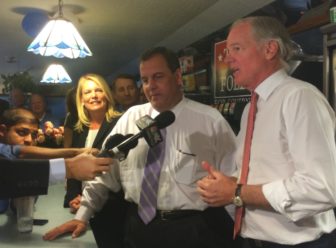 “There’s no doubt Connecticut and Illinois, for me, are the two most important challenger races in the country,” said Christie, whose travels Tuesday also took him to Illinois.

Christie is a road warrior this year, earning frequent-flyer miles in support of GOP candidates, whom he hopes might be in a position to help him in 2016 should he run for president.

Often combative with the press at home, Christie was all charm in Stamford, endorsing the right of the protesters to greet him with pickets and reacting playfully to a question about his efforts to lose weight. He took questions behind the counter at Curley’s Diner in downtown Stamford, then crossed the street to a sold-out $100-a-ticket fundraiser at Bobby Valentine’s.

No one asked if he took the George Washington Bridge.

The issue of Christie’s weight — it’s a number he won’t reveal — has been a potential drag on his presidential aspirations, but he denied that presidential politics spurred him to undergo the lap-band surgery.

“I got elected to office at my previous size and it didn’t seem to bother the voters of New Jersey twice, so the people who say it’s about politics are just wrong,” Christie said. “It’s about living a healthier life and being healthier and being able to stay around longer.”

As for the New York Times item?

“I can tell you this much: It wasn’t accurate, but I’m not going to tell you why it wasn’t accurate,” Christie said. “I don’t talk about that stuff, and the reason I don’t is because that’s my business and not anybody else’s.”

Citing an unnamed source, The Times reported Monday that Christie was asked about his weight  during a private function Friday at the Manhattan townhouse of David Koch, a major funder of conservative causes. 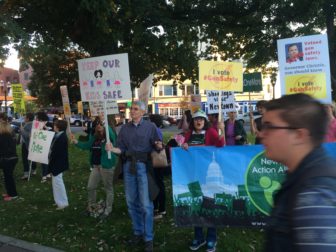 The trip to Stamford was Christie’s second to Connecticut in three months on behalf of Foley and the state GOP. He endorsed Foley at a diner in Greenwich on July 21, weeks before Foley won the Republican primary.

“It can be summed up in two quick points: lost jobs and higher taxes,” Christie said.

On both visits, he was greeted by protesters angry over his veto of a gun-control bill that would have limited ammunition magazines to no more than 10 rounds. Foley has promised to sign a repeal of the gun-control law passed in Connecticut after the Newtown massacre, though he says he would not seek its repeal if elected.

The Rev. Kate Heichler of Christ the Healer Church in Stamford was among the demonstrators who gathered in a small park separating Curley’s from Bobby Valentine’s.

“Smart, sensible gun laws are worth fighting for,” she said.

Malloy, who sought the gun control legislation, says he would veto any bill that repealed or significantly weakened a law that bans the sale of high-capacity magazines and military-style weapons such as the best-selling AR-15 rifle.