A rough road ahead for transportation improvements

At first glance, Connecticut’s transportation system is in line for a big boost no matter who wins the race for governor.

Gov. Dannel P. Malloy insists his administration already has elevated transportation spending to new heights, and that – if he is re-elected – things only will get better.

But as candidates tout their transportation platforms, they simultaneously espouse other fiscal positions that would all but eliminate any hope of a major boost in transportation spending. And despite four fuel-tax increases over the past decade, Connecticut’s aging, overcrowded transportation system – as well as the state agency that cares for it – in some ways are worse off than they were 10 years ago.

Transportation is ‘a passion to me’

“This stuff is a passion to me,” the Democratic governor said in his opening remarks two weeks ago to hundreds of transportation advocates gathered for a forum in North Haven. “This administration is committed to build out the infrastructure of this state.”

“I know the difference between spending and investing,” Foley told the same group, adding that transportation is one of those areas “where we need to invest more.”

Both candidates said increasing transportation spending is crucial, not only to create construction jobs now, but to upgrade an infrastructure that is holding back Connecticut’s long-term, economic growth.

Most states rely on a combination of federal grants and state financing to pay for their transportation capital program. In Connecticut, with an aging highway system, considerable population density and tough winters, adequate state funding to complement federal dollars is crucial. 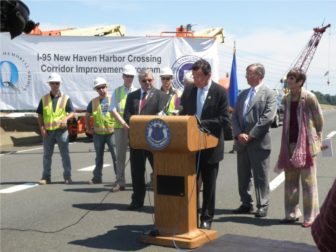 And state finances, barring a dramatic-and-unanticipated economic surge, are facing significant hurdles in the next few months.

The transportation fund gets the bulk of its resources from Connecticut’s retail and wholesale fuel taxes. But while four tax hikes have increased state government’s take at the pumps by 40 percent since 2005, nearly $1.4 billion in receipts has been spent on non-transportation programs since then.

Despite those tax hikes, the Department of Transportation has 3,188 full-time positions in this year’s budget, which is 74 – about 2 percent – fewer than it had in 2005 before the gas tax hikes began.

In terms of positions actually filled, the DOT is in worse shape. The agency had 2,937 full-time staffers on Sept. 1. That’s 172 fewer – almost 6 percent less – than it had in July 2005 when the first gas tax hike began.

And both Malloy and Foley say they would continue to freeze many vacant positions across state government to chip away at the post-election budget deficit.

It’s that deficit that poses the biggest problem for any state officials hoping to shift more dollars to transportation after the election. According to the legislature’s nonpartisan Office of Fiscal Analysis, the General Fund, which comprises the overwhelming majority of the state’s operating budget, has a built-in shortfall of $1.4 billion, or 7 percent next fiscal year.

Economy not riding to the rescue in 2015

That deficit projection already assumes General Fund tax revenues will grow by $350 million in 2015-16. Only if growth exceeds that target does the deficit get smaller.

But don’t count on that happening, two prominent Connecticut economists told The Mirror.

“There’s nothing on the horizon that says we have robust growth any time soon in the Connecticut economy,” said New Haven economist Donald Klepper-Smith, who was chief economic advisor to Gov. M. Jodi Rell. “This is an economy that is really sort of limping along.”

Economist Fred V. Carstensen, who heads the University of Connecticut’s economic think-tank, said the state’s economy is on pace to grow a very modest 1.5 percent this year, and maybe do slightly better in 2015.

“There’s nothing to suggest in the next fiscal year that anything dramatic is going to happen,” he said, adding that sequestration — far-ranging mandatory federal budget cutbacks — is holding back Connecticut’s recovery far more than state officials realize.

Further complicating matters is a national business trend of holding salaries down – a trend felt particularly strongly in Connecticut.

Even if the recovery speeds up considerably, both Malloy and Foley are making campaign promises that will make it difficult to pump significant new dollars into transportation.

Both candidates quickly took any talk of raising taxes off the table – not a surprising move in any election campaign. In fact, Malloy and Foley have been promising to cut taxes — not increase them – if elected.

One way to whittle down next year’s shortfall would be to delay tax breaks already approved by the legislature. Relief for retired teachers, consumers, businesses and the working poor – all scheduled to kick in next year – represents $220 million of the $1.4 billion deficit.

But Malloy says he won’t need to cancel or postpone that relief.

And in recent weeks, as the race has remained tight in the polls, Malloy has proposed $40 million in new tax cuts, pitching relief for urban businesses and young adults with student-loan debt.

But the GOP candidate has been more decisive when it comes to Connecticut’s 6.35 percent sales tax, saying repeatedly he will shave one-half of 1 percentage point off the rate – a move that would cost the state roughly $330 million a year.

Besides potentially widening the next budget deficit by proposing new tax cuts, Malloy and Foley also have been reluctant to offer many specifics about reducing state spending.

Both have said there is no need for state employee concessions, layoffs, or municipal aid cuts.

The only segments of the state budget that Foley has said might be ripe for cuts are public colleges and universities – which he insists could absorb cuts without responding with tuition increases – and payments to health insurance carriers, hospitals and other medical providers.

Even a 10 percent drop in all of these areas would close roughly a quarter of the $1.4 billion deficit the general fund faces next year.

Tolls not ruled out

Neither Malloy nor Foley have ruled tolls out entirely, but they are far from embracing them.

Foley said he would consider tolls only as a means to reduce traffic congestion, and not as a source of new revenue – even for the Special Transportation Fund. That means if tolls are added to highways – and therefore increase revenues for the state’s coffers – Foley would insist those receipts be used to lower gasoline taxes or some other levy by a corresponding amount.

The governor, who has said repeatedly that he isn’t proposing tolls, said he would consider them if there’s a “doomsday” scenario in which federal transportation aid to states drops dramatically.

The Business Council of Fairfield County, one of the most vocal advocates for increased transportation investments, can see the writing on the wall.

Joseph McGee, vice president of the Fairfield Business Council, predicts business leaders will vote for candidates who have a plan to not just upgrade transportation in Connecticut, but also pay for it.

“We understand it’s hard to ask the taxpayers to cover another deficit,” said business council vice president Joseph McGee, a former state economic development commissioner under Gov. Lowell P. Weicker Jr. “But you have to have money for transportation. There’s no question.”

The council has particularly been pressing the state to spend up to $3 billion over the next decade to bring its shoreline rail system into good repair, and another $2 billion to develop high-speed commuter service between Hartford and New York City.

McGee predicted business leaders would back those candidates that offer three things: a specific plan to upgrade transportation that works within a larger strategy for Connecticut’s economic future; a specific program to pay for these investments; and a commitment to begin the program within the next year or two.

“We know it won’t happen right away, but it has to start soon,” McGee said. “The economy is picking up and it’s going to do better. At some point we’re going to have more to spend. We need to be ready.”

This story is the last of three parts. Read Part One here and Part Two here.