Bridgeport – President Obama dropped in on Connecticut’s race for governor Sunday, a day when the political winds shifted: Gov. Dannel P. Malloy got a bump in two polls, and independent Joe Visconti dropped out to endorse Republican Tom Foley.

Obama weathered heckling by immigration activists, holding up his hand for silence, allowing them to be heard – for a while. And he began to laugh at the noisy, joyous interruptions by those who came to see him and answer his call to turn out Tuesday for Malloy.

“Hold on a second. This is a rowdy crowd today,” Obama said, leaning forward and laughing. “Hold on, hold on. Quiet down. Quiet down.”

Democrats hope the president’s visit will deliver a jolt of energy to a nasty, yet strangely listless campaign that’s pitted a struggling Democratic incumbent against a Republican whose major message has been that he is not Malloy. Polls over the weekend showed Malloy with a narrow lead.

“Are we fired up?” Obama yelled to a capacity crowd of 1,900 as he climbed onto a stage in the gymnasium of Bridgeport Central High School.

They screamed, cheered and waved signs.

Bill Clinton has visited twice, holding rallies in New Haven and Hartford. Michelle Obama stood on stage in another high school gym on Thursday, urging New Haven Democrats to do what they did four years ago, produce a giant urban plurality for Malloy.

Democrats largely ignored Visconti’s departure Sunday to focus on the mechanics of getting out the vote Tuesday, a job helped by Obama on a similar visit to this city four years ago, when Malloy defeated Foley in their first race by just 6,404 votes.

The president is trying to deliver again, hobbled by his own falling approval rating and a diminished buzz among young and minority voters as the first black U.S. president. His venue Sunday was a 1,900-capacity high school, not the 10,000-seat arena of 2010.

But it was full, and it was loud.

Obama, who wore a suit but no necktie, seemed to enjoy himself, smiling broadly as the crowd chanted, “Four more years!”

“What we do best is close,” U.S. Sen. Chris Murphy told the crowd, shortly before the president arrived with Malloy, who has grown into an ally and defender of Obama on health care and a higher minimum wage. “We close campaigns better than anyone.”

U.S. Sen. Richard Blumenthal, elected the same year as Malloy, told the voters in the gym to look around: The margin of victory could be as small as the number of voters in the room.

Obama’s visit was a fitting punctuation on a Malloy campaign that has borrowed heavily from the president’s successful ground game, his advertising team and some of his campaign staff.

Like Obama’s contest with Mitt Romney in 2012, Malloy is an incumbent facing a wealthy challenger, Foley, running as a manager and problem-solver who can boost a sluggish economy.

“We have built a great ground operation that I think will deliver our vote on election day, just as we did four years ago,” Malloy said in an interview this weekend. “We’re casting an even wider net this time.” 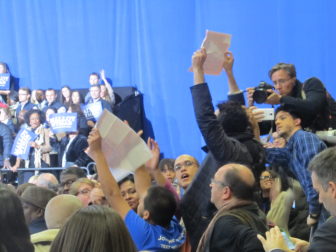 Malloy and New Haven Mayor Toni Harp greeted Obama as Air Force One landed at 2:11 p.m. at Tweed-New Haven Airport. The Democratic governor joined the president for the short hop on Marine One to Stratford, then a motorcade to Bridgeport.

In his introduction of Obama, the governor was unusually personal, recalling their conversation on what Obama has called the worst day of his presidency: Dec. 14, 2012, the pre-holiday Friday when a gunman killed 20 students and six educators at Sandy Hook Elementary School in Newtown.

“He came to our state a few days later, and he gave one of the most compelling speeches about who we are and what we are and how we will survive even the worst days of our lives. He cared about us, and he urged us on,” Malloy said.

Obama was making his second trip to Connecticut this year. As the Connecticut General Assembly was about to adopt legislation implementing a $10.10 minimum wage, the president addressed a rally at Central Connecticut State University in New Britain.

On Sunday, Obama descrbed Malloy as a governor who inherited a tough fiscal crisis, and “made the tough calls.

He twice was interrupted by the immigration protesters who have dogged him.

“So, listen, here’s the good thing about a democracy, is everybody can speak. As I said before, it’s always ironic that the folks who are shouting don’t understand that we actually support their issue,” Obama said to applause. “The folks who don’t support the issue are the ones who are voting against Dan Malloy. So they need to go to the other rally and focus on them.”

Obama returned to talking about Malloy, but he was interrupted a second time.

“I am sympathetic to those who are concerned about immigration, because the truth of the matter is, is that we’re a country of immigrants,” Obama said, as the crowd applauded. “That’s why we fought for immigration reform. It’s the other party that’s blocked it.  Unfortunately, folks get frustrated, and so they want to yell at everybody. And I understand that. But this is part of why elections are so important, because we do have two different visions of America.”

He talked about the governor’s overcoming learning disabilities.

Obama closed with the same message his wife delivered Thursday.

“But none of that happens unless you go vote.” 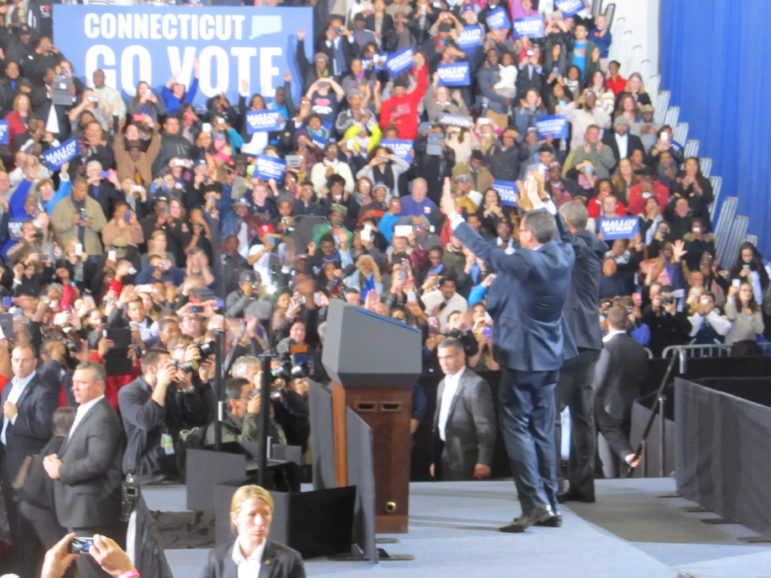 The president, the governor and a piece of stagecraft: A “GO VOTE” banner was hung opposite a platform for photographers.