Budget chief: Some tax cuts may have to wait; CT colleges likely to face cuts

Gov. Dannel P. Malloy’s budget director acknowledged Monday there’s little likelihood all of the tax relief promised on the campaign trail can be provided in the next state budget, which faces a major deficit projection.

But Office of Policy and Management Secretary Benjamin Barnes quickly added he believes those tax breaks, worth roughly $260 million, can be provided over the next four years.

And while the governor promised new tax relief for college graduates struggling with student loan debt, Barnes said Connecticut’s public colleges and universities probably won’t be spared from emergency budget cuts due out this week.

Connecticut’s community colleges, the regional Connecticut State Universities system, and the University of Connecticut all ordered double-digit increases in tuition and fees over the course of Malloy’s last term in response to major cuts in state assistance.

‘A number of campaign commitments were made …’

“A number of campaign commitments were made, and we have every expectation that we will be able to fulfill all of those commitments,” Barnes told Capitol reporters during a late-morning briefing Monday. “How we implement them over the course of the term will be driven to some degree by the economic necessities of balancing our budget each year.”

Nonpartisan analysts have been warning since last summer of a more than $1.3 billion hole in the next state budget, a gap of about 7 percent.

Barnes added that, “It goes without saying that everything we do has to be done in the context of our constitutional requirement to balance the budget, so we expect to be able to satisfy those, but we may not be able to do them all at once. We may have to do them in a graduated way in order to have them be affordable.”

Malloy and his fellow Democrats in the legislature’s majority approved about $220 million in tax relief over the last two years that doesn’t take effect until the next state budget – a controversial move deemed election-year pandering by Republican lawmakers.

The governor proposed another $40 million in new tax breaks on top of that while on the campaign trail. In mid-September he proposed a new tax cut for urban businesses that grow jobs and a state income tax credit tied to interest paid on student loan debt.

Barnes did not say Monday which tax breaks might be deferred.

And when the governor was asked two months ago – as he promised new tax cuts – whether he would need to delay the already approved tax relief to close the post-election deficit, he said: “I don’t think that will be necessary, to tell you the truth.”

Also Monday, Barnes said the administration would deliver emergency budget cuts later this week to reduce a small deficit, about $89 million to $100 million, in the current budget.

And he indicated cuts most likely would affect the four Connecticut State Universities, the dozen community colleges and UConn.

“In terms of taking rescissions out of higher education, everybody’s going to have to make some contribution toward keeping our affairs balanced in the state of Connecticut,” he said. “Higher education is essential to our efforts in economic development. It is essential for our long-term vision for how to make our state more competitive, more successful.

“… But we believe in a lot of things. That said, that doesn’t mean they get a pass.”

State funding for higher education had already taken a major hit the previous two fiscal years as lawmakers grappled with closing budget shortfalls. And while state funding for the current fiscal year has reached pre-cut levels, the increase has not kept pace with the salary increases the schools must provide their unionized employees because of a contract the Malloy administration negotiated.

“Union-mandated increases required 5 percent raise in FY15 which is much higher than the increase in state support,” University of Connecticut budget officials informed faculty earlier this month.

At UConn – where state support covers 29 percent of the schools’ budget – the state’s inability to keep pace with the school’s rising operating costs resulted in the school’s tapping its emergency reserves to pay 2 percent of its expenses this year. 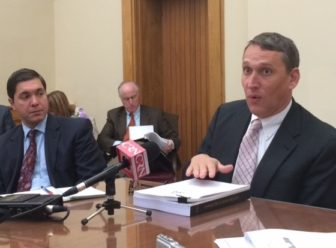 The Board of Regents for Higher Education, which oversees the four regional state universities and community colleges, also faced significant budget challenges. During workshops this spring, several college presidents told the regents they have had to cancel certain courses and increase class sizes to balance their budgets.

On Monday, a spokesman said the problems remain.

“We are struggling very hard to maintain a tuition increase of no more than 2 percent,” Michael Kozlowski said during an interview. “Cuts at any time are difficult, but we understand that, like the Board of Regents, everyone has to balance their budgets.”

It’s unclear where the public college systems might make cuts in response to state spending reductions.

Malloy also promised during the campaign to increase state-funded student financial aid by $10 million sometime “over the next four years.” State-funded aid has taken a major cut in recent years, declining from $63.4 million in fiscal 2011 to $44.5 million this year.

The administration also hopes to wipe out red ink later this year by freezing most new hiring. Higher education officials are not impacted by the hiring freeze, because college leaders have autonomy over most of their budgets.

Barnes also said he hopes that state income tax receipts tied to capital gains, dividends and other investment earnings would outperform the original projections built into this year’s budget.

Also Monday, the governor, talking earlier with Capitol reporters, reaffirmed his campaign pledge not to raise taxes, despite the deficit projection.

Malloy said his pledge applies not only to the new budget he must propose to the legislature on Feb. 4, but to any final adopted plan lawmakers might send for his signature.

“I’m certainly not proposing anything, and I don’t think we’re going to have anything” from the legislature, said Malloy.

When asked again if that meant his no-tax pledge applies to any new budget he would sign, the governor added that “I think that that’s – based on everything we know – that’s basically what I’ve said, yeah.”

Malloy took considerable heat in his first term for ordering more than $1.8 billion in tax hikes. But that was done to help close a projected shortfall of almost $3.7 billion, or 18 percent of annual operating expenses, that he inherited in his first budget.

I think that that’s – based on everything we know – that’s basically what I’ve said, yeah.”