Feds: Rowland was making $420,000 when he cut secret consulting deal 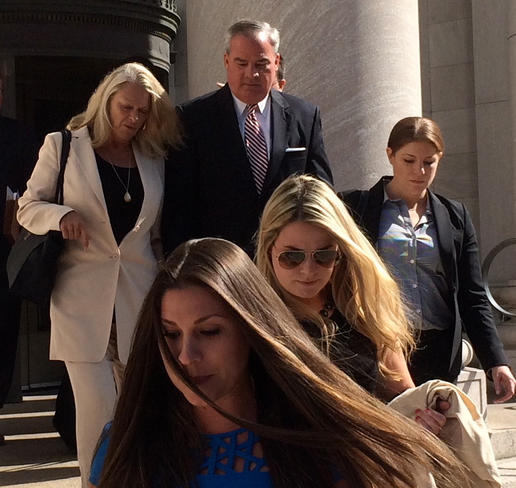 John G. Rowland and wife, Patty, led by his two daughters as the trial opened.

Federal prosecutors say that former Gov. John G. Rowland was making $420,000 a year when he conspired to be secretly hired for $5,000 a month as a consultant to the 2012 congressional campaign of Lisa Wilson-Foley.

In a sentencing memo that demands a prison sentence of between 37 months and 46 months, Assistant U.S. Attorneys Liam Brennan and Christopher M. Mattei say that Rowland was motivated by a desire to once again be a political player, not a need for money.

“The fact is Mr. Rowland’s offense was not driven by a need for money, but a need for power, influence and political admiration,” the prosecutors wrote.

Rowland, who pleaded guilty to corruption charges 10 years ago after his resignation as governor and served 10 months in prison, was convicted in September of conspiring with Wilson-Foley and her husband, Brian Foley, to violate campaign finance laws.

Unwilling to publicly hire Rowland for her campaign, Wilson-Foley instead indirectly retained Rowland through her husband’s nursing home chain.

“Mr. Rowland had hopes of rebuilding his political influence and becoming relevant in the world of Connecticut politics. This desire was so powerful that Mr. Rowland once again cast aside the public good and his legal obligations to satisfy his own arrogance and hunger for being at the center of political action,” the prosecutors wrote.

The U.S. Probation Office has calculated that Rowland should face 30 months to 37 months in prison under federal sentencing guidelines. The prosecution says the office’s calculation does not adequately reflect Rowland’s efforts to obstruct justice by hiding his consulting deal.

Rowland’s lawyer, Reid H. Weingarten, says that the Probation Office erred on the high side. The actual calculation should be 18 months to 24 months, but Rowland should get an even lesser sentence based on his personal history, Weingarten said.

The prosecution says that Rowland, a three-term congressman and three-term governor, rapidly rebuilt his life after his release from prison in February 2006.

He was hired to promote economic development in his hometown of Waterbury and signed up with a speaker’s bureau that represents Magic Johnson. Eventually, he landed a drive-time talk show on Connecticut’s top-rated AM radio station, the CBS radio affiliate, WTIC.

“Not only was Mr. Rowland able to find gainful employment – an advantage that is all too often denied to ex-offenders – he achieved real personal and economic success. In 2012 and 2013, Mr. Rowland earned more money than 98% of all Americans,” the prosecutors wrote.

Quoting the pre-sentence report compiled by the probation office, they added,  “Such success ‘make[s] it all the more difficult to understand Mr. Rowland’s reengagement in criminal activity’.”