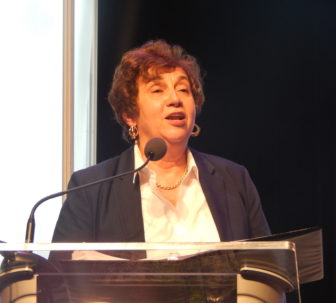 Nancy DiNardo at the 2014 state convention.

Nancy DiNardo is ending a decade as Democratic state chairwoman next month and is expected to be succeeded by her vice chair, Nick Balletto, with the backing of the recently re-elected Gov. Dannel P. Malloy.

DiNardo, 65, of Trumbull, one of the nation’s longest-serving state chairs, is leaving on a high note, but her departure also comes at a time of sweeping transition since Jonathan Harris, the executive director, also is leaving.

The state’s majority party is coming off an impressive statewide victory, building an infrastructure that helped Malloy overcome tepid job-approval ratings to win a second term with 51 percent of the vote. He is the first Democratic governor elected in a generation.

DiNardo and Harris are leaving as the governor and other party leaders are assessing how much of the election-year infrastructure can be maintained permanently.

“I think we had a great team,” DiNardo said in an interview Friday. “I loved every minute of it.”

The choice of DiNardo’s successor is up to the 72-member Democratic State Central Committee, but the committee usually defers to the wishes of a sitting governor. DiNardo said she believed that Balletto has the support of both the committee and governor.

“Going forward, I believe that Nick Balletto would do an excellent job in the role of chair,” Malloy said in a statement. “There are important elections in our towns and cities this fall and I know Nick is committed to continuing the work that Nancy and the Connecticut Democratic Party have done to partner with Democrats running for local, state, and federal offices.”

DiNardo and Balletto informed the committee of their plans by email Friday.

DiNardo said she intends to remain active for a transitional period, essentially switching jobs with Balletto by running for vice chair next month. Balletto, 48, who now lives in Guilford, was the Democratic town chairman of New Haven from 1996 to 2002. The city is the party’s single largest source of votes.

Harris, a former state senator from West Hartford, took the role of executive director in May 2011, four months after Malloy was inaugurated.

Harris, a lawyer, is leaving the party post as Malloy is assembling his team for the second term. His plans were not made public.

The role of a state party chair has evolved along with campaigns.

The archetype of a state chairman was John Bailey, the Democratic chairman from 1946 until his death in 1975. During his three decades in power, the state parties tightly controlled the nominating process through conventions.