Malloy takes oath for second term: ‘I most assuredly do’

Asked if he would swear to uphold the duties of the office, Malloy raised his right hand and replied, “I most assuredly do.”

The crowd was smaller than four years ago, when Malloy became the first Democrat in 24 years to take the oath as governor, facing a $3.6 billion deficit, a stagnant economy and the high expectations of a party that could win every office except the one that mattered most.

Malloy arrives at the state armory for his swearing-in accompanied by his wife Cathy and Thaddeus Martin, state adjutant general.

“These four years now behind us were not easy,” Malloy said. “We faced difficult choices, with few simple answers. We had contentious debates, even among friends. We weathered historic storms from which we had to rebuild. We were shaken by unthinkable tragedy in Newtown, and we found consolation within one another.”

Malloy quickly glossed over the past four years, prompting applause when he mentioned increasing the state’s minimum wage, which jumped to $9.15 last week and will rise to $10.10 in two years.

At 4 p.m., he was to deliver a policy address to a joint session of the General Assembly, many of whose members filed into the armory as a group to watch Malloy, Attorney General George Jepsen, Comptroller Kevin Lembo, Treasurer Denise Nappier and Secretary of the State Denise Merrill take their oaths. Lt. Gov. Nancy Wyman was sworn in Wednesday morning by Malloy.

He was preceded to the microphone by his wife, Cathy, who made remarks she had hoped to share on election night, but postponed after Republican Tom Foley declined to concede until the following day. She talked about how they met while Malloy was a student at Boston College in the 1970s.

The First Lady complained she never got to make a campaign commercial in 2014. She said she had a ready tag line: “As a Massachusetts girl would say, ‘He’s wicked smaht’.”

Her voice choking, she described how the Malloys moved her mother into the Executive Residence for the last two years of her life and said, “Your governor was an amazing son-in-law.”

Former U.S. senator and governor Lowell P. Weicker at the swearing in of Gov. Malloy.

Lowell P. Weicker Jr., a governor who faced a similar deficit upon taking office in 1991, was in the audience. He skipped the inaugural in 2011 over a sense he had been slighted by the incoming administration.

When Malloy introduced him, the crowd rose and applauded.

Malloy marched with his wife and three sons, Dannel, Ben and Sam, from the Soldiers and Sailors Memorial Arch in Bushnell Park, around the Capitol and into the Armory, which is named for his most recent Democratic predecessor, William A. O’Neill. It was a parade with more marchers than spectators.

Near the end of the route, Malloy greeted Robbie and Kiley Mullins, children who came to the parade with their parents, Rob and Jeanne Mullins of North Branford. 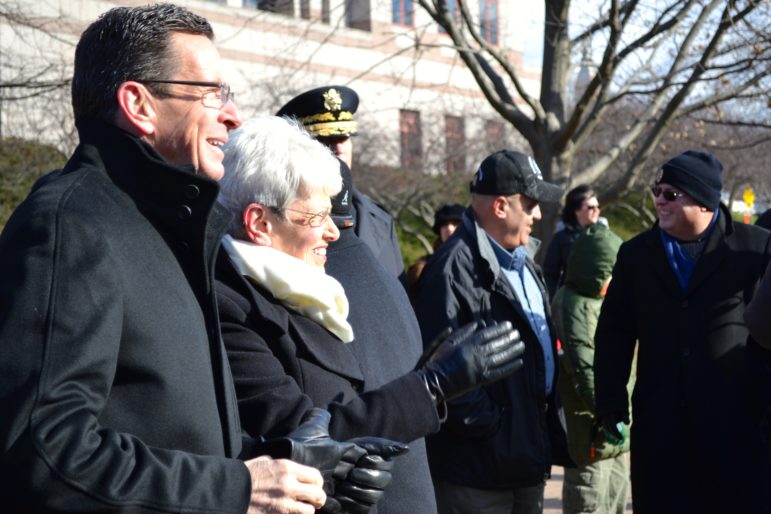