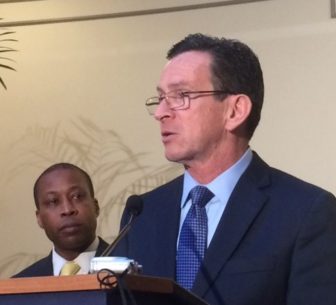 Gov. Dannel P. Malloy accepted the final report of the Sandy Hook Advisory Commission on Friday, somberly and profusely thanking its 15 members while offering no support for further restrictions on firearms and ammunition.

The commission’s findings and recommendations, including a call for significant investments in an “underfunded and fragmented behavioral health system,” comes as the legislature considers deep budget cuts proposed by Malloy.

“I do think the elephant in this room is the cost of this document,” said Wayne Sandford, a University of New Haven professor and former public safety official who served on the commission. “I know it couldn’t come at a worse time.”

The commission named by Malloy was one element of the state’s response to the worst primary school shooting in U.S. history: the massacre of 20 first-graders and six staff members at Sandy Hook Elementary School on Dec. 14, 2012.

Five months after the attack, the General Assembly adopted a gun control law that broadened background checks on gun purchasers and banned the retail sale of military-style firearms and ammunition magazines capable of holding more than 15 rounds.

Adam Lanza, 20, killed his mother and then launched his assault on the locked school with her AR-15 rifle and 30-round magazines. He killed all 26 victims in minutes, then took his own life with a handgun as police arrived.

Nearly all the commission’s recommendations were published last month in a draft report.

The governor and legislature have shown no appetite for opening a new debate on gun control, other than perhaps a requirement that every firearm be sold with a trigger lock.

Malloy said he was unsure it was practical for one state to implement one of the recommendations: stamping all ammunition with serial numbers to allow better tracking.

Connecticut now has one of the nation’s more rigorous systems of background checks, but the commission recommended setting a “suitability” standard for firearms ownership in state law.

Scott Wilson, the president of the state’s largest gun-owners’ group, the Connecticut Citizens Defense League, emailed reporters with a critique of the report while the commission’s chairman, Hamden Mayor Scott Jackson, and other members made their final remarks.

“Banning firearms that can hold over 10 rounds, and forcing law abiding citizens to engage in prohibitively difficult ‘hoop jumping’ just to own a firearm is not the way a person should be treated anywhere,” Wilson said. “The recommendations are abusive in nature to people who wish to have the best means necessary to protect their families from harm.”

The report also recommends new standards for safe school design, including the installation of classroom doors that can be locked from the inside. There is no known case of a shooter breaching a locked classroom door.

Lanza entered the locked school by shattering a window with gunfire. The classrooms were unlocked.

The state has already provided $43 million in grants to improve security in local schools.