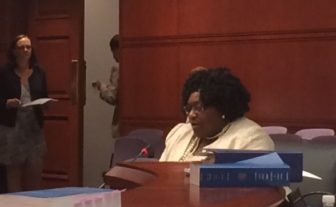 Shelby Brown testifying at the legislature. At left is Carol Carson, executive director of the Office of State Ethics.

An appointee of Gov. Dannel P. Malloy asked legislators Friday to help her exercise greater administrative control over the state’s watchdog agencies, including one investigating the governor’s campaign finances.

Shelby Brown, the executive administrator of the Office of Governmental Accountability, asked legislators to clarify in statute her authority over the personnel, finances and computer systems of the autonomous watchdogs.

The request comes as Brown’s relationship with some of the agencies for which her office is supposed to offer back-office administrative support has reached a nadir as she has asserted a right to investigate their employees.

Without warning, she recently seized a computer from the State Elections Enforcement Commission as part of an investigation of a former employee suspected of violating state policy by uploading commercial movies.

Brown told members of the legislature’s Government Administration and Elections Committee on Friday that her request for further authority entailed a technical revision to the state law creating the Office of Governmental Accountability.

“That’s a sea change from where we are today,” said Sen. Michael McLachlan, R-Danbury, ranking Senate Republican on the committee. He noted that her role was intended to be one of administrative support for the watchdogs, not oversight.

Outside the hearing room, Brown told The Mirror that her role carried fiscal and human-resource authority, including a responsibility to enforce collective-bargaining agreements and state labor laws. She called it a mistake to consider her role as purely supportive.

Brown’s appearance before the committee escalates a conflict between her and the Governmental Accountability Commission, the panel that recommended her hiring to Malloy and is responsible for evaluating her performance.

Brown said she does not answer to the commission.

“Quite frankly, I work for the governor,” Brown said in an interview after addressing the committee during a public hearing. “That’s who appointed me.”

And that is exactly the concern of the three largest of the watchdog agencies. They enforce elections, ethics and freedom-of-information laws – all of which put them in a potentially adversarial relationship with any gubernatorial administration.

Elections enforcement, the Office of State Ethics and the Freedom of Information Commission all strenuously objected to Malloy’s insistence four years ago on reorganizing the agencies under a common framework, the Office of Governmental Accountability.

The Malloy administration pitched the plan as an exercise in efficiency: OGA would provide unified back-office support for nine agencies that otherwise would remain autonomous.

The legislature inserted a layer of insulation between Malloy and the agencies, creating the Governmental Accountability Commission, composed of a representative from each of the nine agencies.

Malloy had to pick an executive administrator from a list of candidates screened and approved by the commission members.

Brown was their top choice.

Anthony Castagno, the chairman of the elections commission, said in her interviews Brown stressed a need to work collaboratively with the nine agencies, a welcome message after months of open conflict with her predecessor, David Guay.

But Castagno said Brown has since tried to assert more authority over the nine agencies, and she informed him by email that she does not answer to the Government Accountability Commission.

“She doesn’t believe she reports to anybody,” Castagno said. “This is exactly what everybody warned about when this Office of Governmental Accountability was created.”

Castagno and Michael Brandi, the executive director of the elections commission, said Brown’s seizure of the computer was troubling, because it conceivably gave a gubernatorial appointee access to confidential investigative files.

Brown said those concerns were overstated, even if it turned out that one of the commission’s investigations involved Malloy, the man she considers to be her boss.

“Certainly, you can connect all kinds of dots in the universe,” Brown said. “There are lots of ways to do that, right? You can connect the fact there was a full moon last night to what I had for breakfast. You know what I mean?”

She said the issue of greater importance was the former employee’s potential misbehavior.

“I think what’s really relevant is something bad happened. We needed to discover the facts. We proceeded to discover the facts in the most responsible way,” Brown said. “I think that’s important. I hope that’s as important to the executive director of SEEC as much as it is to me. I assume he’s not condoning that employees do things that they shouldn’t. I assume that.”

Brandi said the responsibility for supervising and disciplining commission employees is his.

Brown believes it belongs to her, but she would like the legislature to clarify things.

“So where does the human resource role come in? Is that your question?” she told The Mirror. “That’s my question, too. And so that’s the thing we have to iron out, and hopefully the technical changes I’m requesting will iron that sort of thing out.”

Brown told the legislative committee that the changes she sought would clarify roles and contribute to “harmonious collaboration” among the various entities under OGA.

Colleen Murphy, the general counsel and executive director of the Freedom of Information, said Brown might find more harmony by actually communicating with the agencies.

Her testimony blindsided them, she said.

Carol Carson, the executive director of the Office of State Ethics, said she was stunned to hear Brown’s testimony.

“I resent the implication we’re not complying with all state laws, as we have before [the creation of] OGA and will continue to do so,” Carson said.

“It’s disappointing there was no collaboration or discussion with us about any testimony today,” Murphy said. “I guess it highlights the tension that’s been there from the beginning over the construct of this entity.”