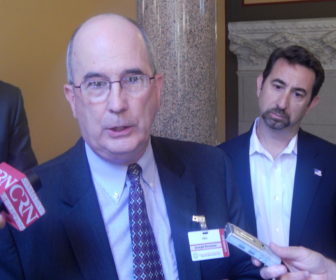 Joseph F. Brennan, president and CEO of the Connecticut Business and Industry Association

Connecticut business leaders warned Thursday that a controversial corporation tax change under consideration for the next state budget could have a profound and immediate impact on the state’s job market.

Leaders of the Connecticut Business and Industry Association and groups representing the state’s trucking companies and retail merchants also expressed fears that the overall level of spending in the next budget would be too high and force further tax increases year after year.

Though Connecticut has a reputation as a high-tax state, the structure of its corporation tax is one of the few tax advantages it holds over other states, said CBIA President and CEO Joseph F. Brennan.

That could change quickly, though, if Gov. Dannel P. Malloy and leaders of legislature’s Democratic majority embrace what is commonly referred to as “unitary reporting.”

At issue is how companies with operations in multiple states report their corporate income. In Connecticut, companies largely have to report only the earnings of their in-state operations — a requirement that critics charge allows corporations to hide profits among out-of-state affiliates, and thereby minimize their tax bill here.

The legislature’s Finance, Revenue and Bonding Committee recommended shifting to a unitary reporting requirement. This would compel companies to share information on all of their operations — both in Connecticut and outside — and undergo a more detailed assessment of what profits are tied to their presence in this state.

Generally this approach results in more taxes owed, and nonpartisan fiscal analysts estimate this would bring another $62 million into Connecticut’s coffers over the next two fiscal years combined.

“Administratively, it’s a nightmare,” Brennan said. “We’re opposed to unitary in every way, shape and form.”

The CBIA leader added that the finance committee recommended more than $2.4 billion in total state tax hikes over the next two years combined. These include increases in income, sales, corporation and hospital taxes. Brennan warned that unitary reporting only exacerbates the fears of some businesses wary of the hefty overall tax hike under consideration.

Mike Riley, president of the Motor Transport Association of Connecticut, said one of his group’s largest members, FedEx, is in talks with Middletown officials to redevelop the former site of Aetna insurance into a new regional distribution center. 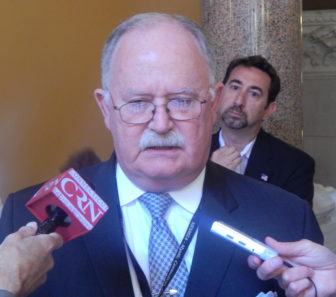 Mike Riley, president of the Motor Transport Association of Connecticut

Riley cautioned that even talk of a unitary reporting requirement often “squelches the deal on these types of things…We can’t mess around with this stuff.”

Many retailers in Connecticut have operations in multiple states, Phelan said.

Unitary reporting “raises the cost of doing business, and that can get passed along” to consumers, he said.

Phelan added that many Connecticut retailers without a major presence online also are struggling because of the growth of e-commerce. “That’s a challenge that we’re already facing every single day,” he said.