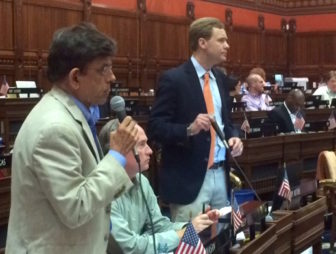 Many individual provisions of the 87-page proposal could have been controversial bills on their own; together, they represent a set of changes that could have significant ripples through major industries undergoing rapid change. Hospital officials have said they impose onerous new regulations and could make it harder for distressed hospitals to find purchasers to help them survive, while unions and advocacy groups say they could help rein in costs and protect patients.

The bill, which passed the House 98 to 43, now goes to the Senate, which passed an earlier version of the bill but must vote again since the proposal was revised.

The bill addresses many facets of health care. It would revise the approval process for the sale of hospitals and establish a statewide system for sharing patients’ medical records. It would require health care providers and insurers to make more information available about the cost and quality of care and insurance plan details, and would curtail certain hospital billing practices. It aims to unravel some of the advantages hospital chains can gain by acquiring physician practices, although the House bill eliminated some of the most controversial steps in that direction developed by the Senate.

The bill was the brainchild of the Senate’s top Democrat and Republican, inspired by their shared concerns about the growth of large health systems that control multiple hospitals and physician practices. When that chamber debated the proposal, Senate Minority Leader Len Fasano, R-North Haven, spoke critically of the Yale New Haven Health System as operating in a monopoly-like fashion, and warned that without action, patients would have fewer choices of health care providers.

The tone was markedly different in the House’s debate, where several members raised concerns about both the bill and broader state policy toward hospitals. Hospitals are now subject to a state tax and have faced cuts in state funding in recent years, while a separate bill this year would subject nonprofit hospitals to property taxes on new off-campus facilities.

“It’s one more slam on our hospitals,” Rep. Terrie Wood, R-Darien, said of the bill.

Rep. Dan Carter, R-Bethel, took issue with criticism of the Yale New Haven Health System, which he said many people would turn to for care if a family member were sick. Carter said the bill seemed to be saying that Yale has gotten too big, and the state should stand in its way.

Public Health Committee Chairman Rep. Matt Ritter, D-Hartford, who worked to revise the bill, defended the measure, saying Senate leaders had “put some things in place here that I believe you’re all going to hear about for years to come, as a moment when Connecticut made changes to make our health care system more consumer-friendly, to bring down costs, to help doctors.”

“And at the same time, you might have a few people say that there were a few sections that, ‘eh, I see a different way,’” he added, noting that hospitals maintained their opposition to the bill.

But Ritter said he believed the revised version was an improvement, and a compromise.

Rep. Prasad Srinivasan, R-Glastonbury, the top GOP House member on the Public Health Committee and the only physician in the legislature, said the bill would have “a significant impact on the landscape of health care for our state.” While not perfect, he said, it was “something we can definitely live with because it has a lot of good values.”

Rep. Jason Perillo, R-Shelton, said he “abhorred” the original version of the bill, but planned to vote for it because of how it was revised. “We are much better off today than we were a month ago, two months ago, 12 hours ago,” he said.

New rules for sale of hospitals

Among the most controversial parts of the bill are changes to the approval process for the sale of hospitals. Many of the state’s independent hospitals have been looking into partnering with larger networks as a way to survive in a health care landscape viewed as increasingly favoring larger organizations.

Plans by the national for-profit chain Tenet Healthcare to purchase five Connecticut hospitals fell through last year after the state regulator, the Office of Health Care Access, indicated it would impose conditions that the company deemed too burdensome. Since then, the regulatory process has come under scrutiny.

The bill would impose new requirements for that process – some of which critics noted were similar to the conditions that caused Tenet to walk away.

The bill would charge the Office of Health Care Access with considering, among other factors, whether a proposed hospital sale could reduce competition and raise prices. Potential hospital purchasers would have to submit a plan showing how services would be expected to change in the next three years.

But the regulator would also have to consider the burden of any conditions it imposes, and would have to show the legal and factual basis for them.

Any hospital sales involving for-profit companies or large hospitals or hospital systems would be subject to additional scrutiny. Those sales would have to go through a cost and market-impact review, and the state attorney general could take further action if the review determines that the transaction is likely to lead to an organization with a dominant market share or prices that are “materially higher” than the rest of the market. If the sale is approved, the purchaser would have to pay for an independent monitor to track compliance with any conditions set for the transaction.

Hospitals that begin the application process for a sale before Dec. 1 would not be subject to the new requirements, which could allow Waterbury Hospital – which is in talks with its third potential purchaser in recent years – to avoid the new rules.

Some critics of the requirements argued that they could make it harder for financially struggling hospitals to find buyers willing to purchase them.

Ritter defended the change, saying that it was a choice between giving the Office of Health Care Access a blank canvas or giving the regulator more guidance – which he said would provide more consistency for hospitals.

“If we find out that distressed hospitals cannot be purchased because of this, which I do not believe will happen, I’ve got a feeling a lot of you will come talk to your colleagues and say we have to look at that,” he said.

The bill includes several provisions aimed at improving transparency in health care costs and quality, calling for the state’s health insurance exchange to create a website that people can use to compare the price of care, and requiring hospitals to provide information about the cost and quality of care to patients who request it. That requirement was scaled back from the Senate version, which would have required hospitals and outpatient surgical centers to provide notification whether patients ask for it or not. Insurers would also be required to provide more information about the cost of care and what benefits and prescription drugs their plans cover.

Patients would receive more notice about facility fees – additional charges they can face for getting care at outpatient facilities owned by hospitals. And facilities fees on some types of care would be banned starting in 2017.

The version that passed the House eliminated two major concerns of hospitals – a requirement that hospitals owned by the same company negotiate insurance contracts separately if the insurer requested, and a provision that would have required insurers to pay community physicians the same rate whether their practice is owned by a hospital or not.

Ritter said two additions to the bill – policy changes sought by hospitals and suggested by Republicans – helped the deal come together Saturday. One would allow hospital systems to file audited financial statements for the entire organization, rather than for each hospital individually, which Ritter said could save the Yale system nearly $1 million and Hartford HealthCare $2 million per year. The other would remove the requirement that hospitals get state approval to replace certain imaging equipment like MRI scanners.