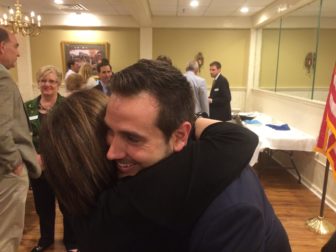 Bristol — J.R. Romano was elected Republican state chairman on the second ballot Tuesday, putting a 36-year-old political operative at the helm of a GOP that picked up legislative seats last year while failing to unseat an unpopular Democratic incumbent, Gov. Dannel P. Malloy.

Romano, who grew up in the working-class Naugatuck Valley community of Derby and nearly was elected to the state House as a 25-year-old, bested businessman John Pavia, 52, of Easton, and state Sen. Joe Markley, 58, of Southington.

He was nominated by his friend, Erin Stewart, 28, the first-term mayor of New Britain, who credited Romano with convincing her to run in 2013 and predicted that Romano would “bring a new generation of leadership.”

“I think it’s not just my age, it’s my upbringing. It’s who I am,” said Romano, who now lives in Branford. “The stereotypical idea Democrats like to push of Republicans is these really wealthy old white men. It’s false.”

“He is going to take it to the governor, call him out and call his party out,” said Herbst, the first selectman of Trumbull.

Eligible to vote were the 72 members of the state central committee, plus the heads of the Young Republicans and College Republicans. Several committee members cast weighted votes worth 1.5 votes based on the GOP turnout in their districts in the past election.

Markley withdrew after the first ballot, setting up a two-way race. Pavia conceded after the second ballot was completed but not officially tallied and asked that one unanimous vote be cast for Romano.

The committee members stood and applauded Pavia’s concession in a function room at the banquet hall, Nuchie’s.

Jerry Labriola Jr., who did not seek a third two-year term after four years as chairman, had injected a small note of uncertainty: He dodged questions about whether he would offer himself as a compromise if the committee deadlocked. 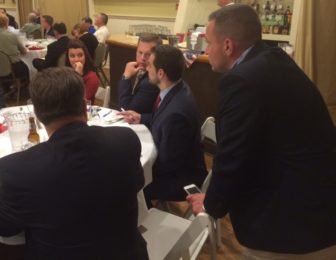 When the moderator asked if there were more nominations, Labriola turned to an aide in the back of the room and said, “I’m still available. Only kidding.”

Romano will be leading a party with no statewide officials or federal office holders and the smallest share of the Connecticut electorate. In Connecticut, the biggest bloc of voters on election day last fall was unaffiliated at 41.7 percent of the electorate, followed by Democrats at 36.4 percent and Republicans at 20.8 percent.

But the party won a majority of town halls last fall, and it has narrowed the gap in the General Assembly. After winning just 37 seats in the state House of Representatives in 2008, it won 64 seats last year, coming within 12 seats of a majority.

Romano is a former political director of the state GOP. For about two years until early 2014, he was the coordinator in Connecticut of Americans for Prosperity, the conservative advocacy group financed by the Koch brothers.

AFP stopped funding a full-time coordinator in Connecticut in 2014, but Stewart said the group made robo-calls under Romano that helped mobilize public opinion against New Britain Democratic Mayor Tim O’Brien over controversial fees his administration imposed on owners of rental housing.

“He was softening the landscape,” Stewart said. “It encouraged me to run.”