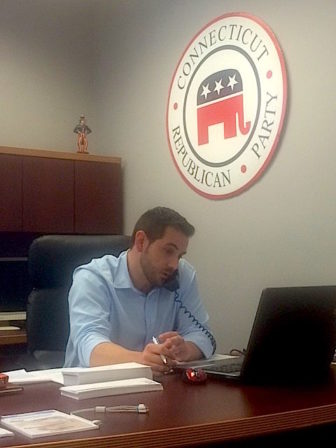 J.R. Romano was on the phone in his downtown Hartford office, confronting a daily reality of being the new chairman of the Connecticut Republican Party: The former marketer, securities dealer and college football player was cultivating a donor.

His pitch wove in hopes for the coming municipal elections and a mention of a chance to pick up legislative seats in 2016, and ended with an invitation to be part of a continuing conversation about keeping the party relevant nine years after its last statewide win.

“No, no, call me any time,” said Romano, seated at a modular desk in an office decorated with a map of state legislative districts. “This is your cell number, right? I’ll text you my cell phone. You can call any time.”

There was no mention of the crisis of his first week: a Republican State Central Committee member who didn’t vote for Romano and did not appear interested in his ambitions for broadening the Grand Old Party’s appeal beyond white suburban voters.

The committee member, Scott Veley, made a point of flying the Confederate battle flag outside his home in Berlin, a white suburb on the border of the racially and ethnically diverse industrial city of New Britain. Then Veley bragged about it on Facebook: “I will not give in to this Politically Correct absurdity – flying the Stars & Bars today in protest.”

The governor of South Carolina, Nikki Haley, was among the Republicans to call for the flag’s removal from the statehouse grounds in her state after the shooting deaths of nine black men and women at a church in Charleston, S.C. The accused shooter is an avowed racist who posed pictures of himself with the flag, which was re-purposed by white segregationists in the early 1960s in response to the civil-rights movement.

Romano said the flag is offensive to him in its historic and more contemporary meanings.

“That flag to me represents separatism. It represents racism. It represents treason,” Romano said. “To me, that is the worst symbol. I hate that flag. What I do love about this country is the fact that we have freedom to be idiots sometimes. There is no question that what he did was insensitive and boneheaded.”

But Romano quickly pivoted, jabbing at Democrats over current fiscal policy, projections of more budgetary troubles in coming years, and longstanding opposition to a few of the new chairman’s favorite issues. They include school-choice and right-to-work laws he championed while employed by Americans for Prosperity, a group funded by the conservative billionaire Koch brothers.

“They’re attempting to capitalize, to distract from the failures in the state,” Romano said of the Democrats’ reaction to Veley’s flag, an issue they tried to keep alive with a conference call to reporters.

Romano, 36, who now lives in Branford, grew up in the Naugatuck Valley industrial town of Derby, where he was quarterback on the football team and played basketball and baseball. He says playing quarterback before thousands in the football-mad valley — he was hanged in effigy at Shelton High School — taught him to handle pressure.

(At Trinity, Romano played defensive back and wide receiver. He has dyslexia, which he wryly says is the only thing he has in common with Gov. Dannel P. Malloy, and play-calling in the college game was a challenge.)

He practices politics with an athlete’s competitiveness that seems to come less from games than martial arts. He is a reflexive counterpuncher.

When the Hearst Newspapers first wrote about the Confederate flag, Romano said, he parried a question about whether the flag made him uncomfortable.

“No more uncomfortable than a liberal who wears a Che Guevera T-shirt,” Romano said he told the reporter, who didn’t use the line. “That man was responsible for thousands of deaths for a political agenda.”

He quickly riffed on racial baggage carried by the Democratic Party, whose embrace of civil rights in the 1960s cost it the South, while developing a deep, persisting loyalty among black voters.

Thomas Jefferson and Andrew Jackson, whose names are honored by the annual fundraising dinners of the Democratic Party, accepted slavery, and Jackson played a major role in the brutal relocation of American Indians from the Eastern U.S. Woodrow Wilson enthusiastically hosted a screening of the racist polemic, “Birth of a Nation,” in the White House.

“Abraham Lincoln is the founder of our party,” he said.

Romano mentioned the arrest in April 2011 of a black woman for illegally sending her 6-year-old child to a public school in Norwalk, blaming Democratic opposition to school-choice policies. It’s a less-than-perfect talking point: Norwalk at the time was governed by a Republican mayor.

“If the state was a school-choice state, that wouldn’t be an issue,” Romano said.

Romano, who was the GOP’s political director not long out of college, tried to become a state policy maker: He ran twice for the state House of Representatives in the 104th District of Ansonia and Derby, losing twice to Democrat Linda M. Gentile, by 339 votes in 2004 and by 776 votes in 2006.

He was endorsed by the New York Times in his second run, when he was 27. The editorial is framed, matted and hangs in his new office.

“He has good ideas and is refreshingly honest about what the state’s priorities should be. He believes that before the state pays for universal health insurance it should ensure that everyone has access to medical care, possibly through community health clinics, since lack of access to such clinics drives up costs,” The Times wrote in its endorsement. “He favors eliminating the property tax on cars and believes that the state should distribute school aid more fairly. Mr. Romano is bright and would be a fine addition to the legislature.”

His command of recent Capitol history could use a little honing. 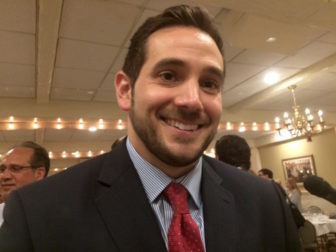 J. R. Romano on the night he was elected chairman.

He described a recently passed law, “An Act Concerning Excessive Use of Force,” which encourages and sets guidelines for the use of police body cameras, as an unfunded mandate. It actually provides funding and encourages but does not require the cameras.

Romano, who managed the aggressive campaign of his Trinity classmate, Trumbull First Selectman Tim Herbst, for state treasurer, also was responsible for a barrage of calls to Sen. Mae Flexer, D-Killingly, that prompted her to call the police.

“I’m a big fan of advocacy phone calls,” he said. “Essentially, it’s when someone says, ‘Mae Flexer voted to raise your taxes. Press 1 now and tell Mae Flexer you disagree with her.’ And it’s just facilitating communication between the constituency and the elected official.”

Flexer complained that all the outreach did was bombard her phone with hangup calls. She declined to comment for this story.

Romano has no regrets, saying Flexer had published her number on her web site.

Democrats suspected Romano of arranging similar calls directed at Sen. Ted Kennedy Jr., but Romano was not listed as a consultant to Kennedy’s opponents’ campaign, and he denied any involvement.

“I think the Democrats are just not used to being held accountable,” Romano said. “No one has had the tenacity I’ve had in the past or the willingness. Even with this thing with the Confederate flag, I don’t answer to them. I’m here to do a job.”

Romano said the state no longer can afford Democratic control, and the GOP needs to be aggressive.

“The Democrats aren’t going to give it to us,” he said. “We’re going to have to take it.”