A struggle for access, political and otherwise, at the Capitol 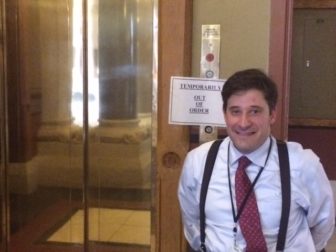 Jonathan Slifka, with the elevator plays a role in determining what access the disabled have at the Capitol.

Call it a bad omen, dark humor or simply farce. On his first day as the governor’s liaison to the disability community, the only elevator that could take Jonathan Slifka, who uses a wheelchair, to the governor’s office was inoperable.

The man whose new job was to provide the disabled with access to Gov. Dannel P. Malloy arrived at the State Capitol, a landmark constructed a century before passage of the Americans with Disabilities Act, to find himself without access.

To some activists, Slifka was becoming the face of an administration often viewed as unresponsive to the disabled. Both Slifka, who did not come from their ranks, and his ill-defined new job were viewed with suspicion.

Eighteen months later, the elevator remains an unpredictable annoyance, but there is progress.

He prevailed in a protracted, if semi-comical turf battle with the Office of Legislative Management that a colleague called “Daily Show dumb.” At issue was whether the governor’s disabled liaison to the disabled could get a handicapped parking space without the governor’s trading another space reserved for the executive branch.

And Slifka has been accepted, to varying degrees, by disability activists, even if they remain unsure of his influence in the Malloy administration.

“This governor continues to take actions or make decisions that seem to be dismissive of this whole community, despite all the fine work Jonathan Slifka appears to be doing,” said Walter Glomb of Vernon, the leader of a group of parents of children with intellectual development disabilities.

In February, the administration proposed a stunning 60-percent cut in funding for an intensive program that provides support for an especially needy population, young people aged 8 to 21 who have developmental disabilities, plus mental illness or autism. The program often is called a lifesaver for families stretched to the breaking point.

The administration also proposed wiping out funding for a day program for recent high school grads who have intellectual or developmental disabilities. It was a cut that might have forced parents to quit jobs to care for adult children during the day.

After months of lobbying and negotiation, the final budget was improved, but it still had hefty cuts: 10 percent for the behavioral services and 18 percent for the day program.

“We went backwards,” said Tom Fiorentino of West Hartford, another parent who has been fighting over funding for the Department of Developmental Services.

It is Slifka’s job to be the conduit to an administration for people who see the administration’s proposed cuts as unconscionable, not ill-considered. That makes for what Fiorentino’s wife, Shelagh McClure, calls “close to an impossible job.”

Slifka, who lives with his wife in West Hartford, said important elements of the job are being clear with himself and the disability community on what his job is and isn’t. He gathers intelligence, which means taking complaints, and making sure the information is shared at the highest levels of state government.

Nor does he make promises.

“My phone rang off the hook for weeks, particularly after the governor released his budget in February, not so much as we got to the end and it looked like things were going to be restored to the degree that they were,” he said.

Slifka said he relayed every message, telling Mark Ojakian, the governor’s chief of staff, how the budget was playing, and what the cuts would mean to individual families.

“It was tough. It was a tough period,” Slifka said. “The tough part for me was not so much listening, it was, ‘What do I tell these people?’ ”

There was no wholly satisfactory answer. Ultimately, he told them their concerns were being heard and the budget probably would change, while warning that resources were tight. He tried to be honest.

“The job is really a combination of outreach, advocacy and education. I spend a majority of my time traveling the state, meeting with various organizations, advocacy groups, disability groups, however you want to term them, learning what their various issues are,” Slifka said. “Sometimes there are various disconnects.”

Slifka, who was born with spina bifida and is unable to walk, is a muscular 38-year-old who travels to meetings in a lightly modified mini-van. It has hand controls, but no lift. He slides onto the van’s floor, where the second seat has been removed, pulls in his wheelchair, then propels himself on his hands across the floor into the driver’s seat. 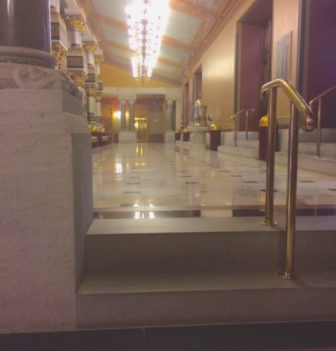 Two steps to a walkway outside the House of Representatives block wheelchair access on the second floor of the State Capitol.

His office is on the first floor of the Capitol, a building where access into one of two major conference rooms is via a steep ramp that does not meet ADA standards.

Eric Connery, who oversees facilities in the Capitol, said constructing a ramp that would meet ADA and aesthetic standards would cost about $30,000.

An architect is now preparing an estimate for adding a second elevator to the west wing of the Capitol, where the main mechanicals of the only elevator are estimated to be about 100 years old. The east wing has two elevators, but the two wings cannot be traversed on the second and fourth floors without using stairs.

Slifka said the accessibility issues are not about him.

“This is the people’s building,” he said. “I’m one person. And, yes, I work for the governor’s office, and the irony here is I work on disability issues. You’ve got people coming in here for tours every single day. People need to get to where they want to go. You’ve got people coming in here for meetings every day that are not state employees. They need accessibility.”

His job was announced as “a cabinet-level” position, which means he reports to Ojakian, participates in department-head meetings and can get access to the governor. It comes with no staff.

“In my relatively limited research, I haven’t found a position anything quite like this anywhere else in the country,” Slifka said.

It is the second of two liaison posts created by Malloy. The other, held by Terry Edelstein, is the administration’s contact for the non-profit community.

Malloy created Slifka’s job at a time when the disability community objected to the administration’s executive order allowing the controversial unionization of personal-care attendants. A fear was that it would lead to higher wages without increased resources, meaning decreased access to care.

For some people with physical and other disabilities, the availability of personal-care attendants is the difference between living independently or in a nursing home.

There was a suspicion that Slifka’s new job was a political gesture and that he would be a figurehead. Fiorentino, who co-chairs a working group with Slifka that is studying the availability of housing for the disabled, said gauging his influence is impossible.

“He is serious and hardworking — and there’s no way I can know what influence he has in this administration,” said Fiorentino, a retired assistant attorney general.

Glomb recalled greeting Slifka’s appointment in January 2014 with doubt that it would lead to a material change.

“Yep, that’s where we are,” Glomb said. “Having said that, I’ve met him on more occasions than I can count now. He is a very nice guy. I think he’s sincere. I think he’s pretty smart. He’s trying to do that job, whatever that job is. He’s there at the pleasure of the governor, and I’m not sure what the governor’s intent is for that position.”

Others less skeptical about the creation of the job still want to see what it turns into.

“We certainly were thrilled that the governor created such a position,” said Daria F. Smith, executive director of the Connecticut State Independent Living Council. “I don’t think we’ve really seen benefits, the total benefits, of it yet. It will be something that needs to evolve.”

Morna Murray, who was named commissioner of developmental services two weeks before the Malloy administration proposed deep spending cuts in her department, said she meets regularly with Slifka and is a member of his residential working group.

“I find Jonathan extraordinarily dedicated and helpful,” she said.

A former lawyer for the Children’s Defense Fund, she was executive director of the Connecticut Community Providers Association at the time of her appointment. Her transition from outsider to insider makes her sympathetic to questions advocates sometimes ask about Slifka: Whose side are you on? At what point would budget cuts prompt a resignation in protest?

Murray said she and Slifka clearly are members of the governor’s team, but they are unafraid to advocate for the disabled, even if the administration’s initial budget was objectionable to the communities they serve.

“I’ve always considered myself a realistic advocate. I advocate for what I think can be done with a certain set of conditions,” said Murray, who did not defend the scope of the cuts when before the legislature. “I would never quit over a budget.”

Mark Bergman, the governor’s senior spokesman, said the disabilities community is not without influence at the Capitol, as the budget revisions showed. They were heard through Slifka, Edelstein and Murray, as well as legislators.

“The community might not feel like they were heard, but they were heard within the administration,” Bergman said. “You saw the budget for their programs improve. To think their advocacy didn’t have an impact on that is a fallacy.”