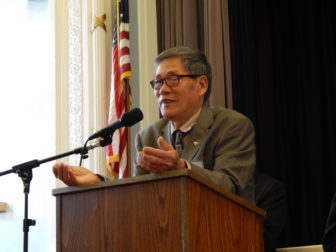 Although it’s been decades since he left Vietnam, Ban Tran recently had a nightmare about being in a Communist prison.

“This happens very often for me,” said Tran, who spent nine years in re-education camps in Vietnam that he said are better described as concentration camps.

Tran is now executive director of the Connecticut Coalition of Mutual Assistance Associations, an organization that helps refugees and other immigrants. He said he recognizes that the nightmares represent a kind of mental illness. But he said many in his community who face similar challenges don’t want to acknowledge them.

“It is not easy to talk about this issue because they don’t want to speak out, but it is still in their minds,” he said.

Tran spoke Tuesday as part of a “listening session” on the health care issues facing Southeast Asian Americans, hosted by the consumer advisory board of the state innovation model, a multifaceted effort to redesign the way health care is delivered and paid for in Connecticut.

State Healthcare Advocate Victoria Veltri, whose office is overseeing the initiative, told the audience that health care policy is often made by people who don’t reflect those it affects.

“Only by listening to you can we change the way we deliver health care…change it to be meaningful to you,” she said. 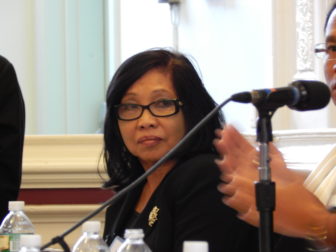 Organizers expected 85 people to attend the event at West Hartford’s Elmwood Community Center, but 148 came. Many in the audience listened through headsets because the program was being translated into Khmer, Lao and Vietnamese.

Those who spoke described challenges including difficulty affording medication, concerns about social isolation, and higher rates of chronic disease and mental health conditions related to trauma than the overall population.

Many of those who came to Connecticut as refugees from Vietnam, Cambodia and Laos in the 1970s and 80s live with multiple chronic medical conditions, depression and post-traumatic stress. But often, they get medical care without access to trained interpreters to help bridge language barriers that can make it difficult to communicate their symptoms, understand how to handle medication, or build the trust needed to address the effects of trauma, speakers said.

“Language is a huge barrier,” said Megan Berthold, a UConn School of Social Work professor who has worked extensively with refugees from Southeast Asia.

A patient might nod and smile or answer yes or no in response to questions, leading the health care provider to think he understands, Berthold said. Some patients bring their children to translate for them, which can make it difficult for a parent talk about feelings of depression and hopelessness, she said. And without trained interpreters, she said, many patients don’t feel safe telling their doctor the full extent of what they’re experiencing, asking questions or weighing in on their treatment in ways that could improve it. 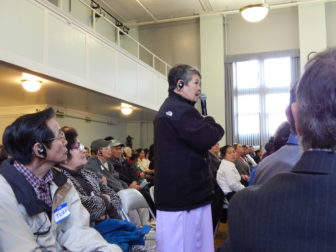 Many in the audience wore headsets to listen to the panel through an interpreter.

Language barriers can be particularly challenging in addressing trauma, since people tend to feel most comfortable in their native language when discussing painful subjects, said Sambo Ly, director of the interpreter services department and refugee health programs at Alameda Health System in California.

Community leaders spoke of their own experiences surviving prison camps or torture in Vietnam, Laos and Cambodia.

Howard Phengsomphone, executive director of the Lao Association of Connecticut, described fleeing Laos by swimming across the Mekong River in the middle of the night. He spent almost a year in a refugee camp before being resettled in Old Lyme in 1980.

Theanvy Kuoch, executive director of Khmer Health Advocates and a member of the consumer advisory board that hosted the event, spoke of living through the Khmer Rouge’s brutal regime in Cambodia in the 1970s. At least 19 of her family members were killed by the Khmer Rouge or died from starvation or lack of medication.

“I remember the Khmer Rouge put my sister in a cage” and beat her daily, she said.

Like Kuoch, many Cambodian refugees came to the U.S. with little more than the clothes on their backs, and settled in places where no one spoke their language, where the food was unfamiliar, she said.

Even today, Kuoch said, “Our problem is that many people don’t know about us.”

There are more than 4,000 Cambodians in Connecticut, she said, and the overwhelming majority of those older than 36 were victims of torture.

Kuoch’s organization, Khmer Health Advocates, focuses on the health needs of survivors of the Cambodian genocide and their families, and provides, among other things, treatment for victims of torture.

Patricia Checko, who co-chairs the consumer advisory board, said she hoped the experiences of Southeast Asian refugees could provide lessons at a time when another wave of refugees, from Syria, is expected in the country.

Berthold said there’s a huge difference between those who come as legal immigrants and those who flee a country as refugees or asylum-seekers.

“They had no choice. They didn’t want to leave their homeland. It was not safe,” she said.

One of the biggest challenge health care providers face in working with refugees, she added, is establishing the trust needed to talk about intimate health details.

Dr. Rick Miller, the medical director for the Khmer Health Advocates Torture Treatment Program, noted that refugees have experienced many difficult cultures. Those from Cambodia, he noted, lived through Cambodia before the Khmer Rouge, the horrors of Pol Pot’s regime, refugee camps, and starting out in a new country as immigrants. And that can lead to cultural clashes, he said. Although rice is a staple in Cambodian diets, he said, one survivor was told by his primary care doctor not to eat rice for health reasons. 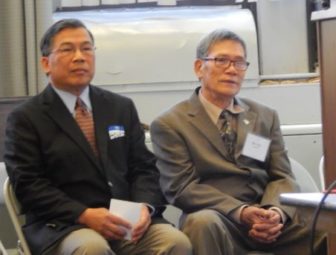 Howard Phengsomphone, executive director of the Lao Association of Connecticut, and Ban Tran.

The man later told others, “I didn’t live through Pol Pot to be told now that I cannot eat rice,” Miller said.

Khmer Health Advocates’ program helps trauma survivors tell their stories at their own pace. One woman took 25 years to begin telling her story, Miller said. The program has an “open-ended” relationship with survivors, recognizing that they might come, go and return later, depending on when they need support. It also incorporates traditional Cambodian techniques, including Buddhist ceremonies.

Tom Buckley, a professor at the UConn School of Pharmacy who also works with Khmer Health Advocates, said many in the community take multiple medications, which can cause problems if they’re not taken as prescribed or if they interact with other drugs.

“We spend more money on treating the problems a medication causes than we spend on a medication,” he said.

But Buckley said he’s hopeful about an approach to addressing complex medication regimens that pairs a pharmacist with a community health worker who knows the community and culture. The community health worker gathers as much information as possible from the patient and has training to screen for depression, post-traumatic stress disorder and other issues. That can help bridge communication with the pharmacist, allowing him or her to concentrate on figuring out which medications are right for the patient, explaining how to take them, and ensuring that the care plan reflects what the patient wants.

Ly, the California health official, described a video interpretation service her department now uses. Before they had that service, when interpreters traveled to each appointment, they could meet 100 requests for interpretation per day. Now, by doing it by video, they can do 700, she said.