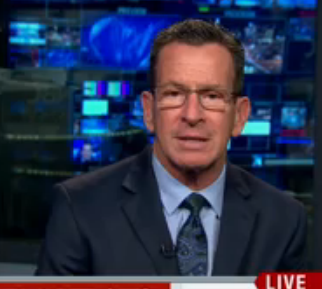 About 30,000 gun deaths can be anticipated in the next year, while U.S. vetting procedures ensure that a well-screened trickle of Syrian refugees are likely to arrive in the same period, Malloy said on “All In with Chris Hayes.”

Malloy, one of 34 governors to participate in nearly a 90-minute conference call with senior White House officials earlier Tuesday, said that the federal government is closely reviewing refugees seeking to relocate to the U.S.

Since 2011, the United Nations has recommended 23,043 Syrians for resettlement in the U.S., but only 7,000 were deemed acceptable for further review and, ultimately, only 2,000 were allowed to enter the country, Malloy said.

“We’re talking about a tiny fraction of people,” Malloy said.

Malloy said the majority of governors who have told federal officials that Syrian refugees are unwelcome in their states “just haven’t bothered to understand what the process is.”

“We have the toughest process in the world about allowing refugees into our country. That’s the reality,” Malloy said. “By the way, let’s be very clear. No one is taking a raft from Turkey to get to the United States. We control this situation to a higher degree than any European country can at the current moment.”

“A bunch of governors got ahead of themselves, didn’t bother to do their homework, didn’t bother to understand what’s going on, even in their own states,” Malloy said. “And they jumped on a political bandwagon.”

Malloy, a Democrat in the first year of his second term, predicted the public and political establishment will take a more reasoned view, but the anti-immigrant governors will carry the day for a time.

“They’re going to win the political argument for a while. People are going to think, ‘Hey, that’s great. Let’s be tough on people,’” he said.