Close juvenile jails? Legislators leave it up to the governor 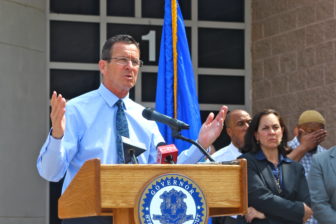 Gov. Dannel P. Malloy outside the entrance of the Connecticut Juvenile Training School in Middletown last spring. At right is Joette Katz, commissioner of the Department of Children and Families, which runs the facility.

Democratic legislators Tuesday retreated from a plan to move legislatively toward closing the controversial state-run jail for young offenders and decided to leave that decision up to Gov. Dannel P. Malloy.

Senate Democratic leaders had announced Monday evening that a bill to eliminate the state’s looming budget deficit would include a provision moving toward closing the Connecticut Juvenile Training School for boys. The facility has drawn sharp criticism for what critics say is an excessive use of restraints and seclusion in dealing with youths confined there and at the neighboring Pueblo Unit for girls.

By Tuesday morning, there was no such provision in the bill.

“The goal is still to close it,” Senate Majority Leader Bob Duff said during an interview shortly before the General Assembly passed the bill. “The fact is that the governor can do this on his own and that he can do it through executive actions. It was almost symbolic to have it in statute. He’s already eliminated half of the [youths] who are there and he’s well on his way to zero. I think legislation is not the primary way that we are going to achieve that goal.”

The number of youth at CJTS has fluctuated from 117 when Malloy took office to a 10-year high of 147 during the spring of 2014 to 69 at the start of this month. 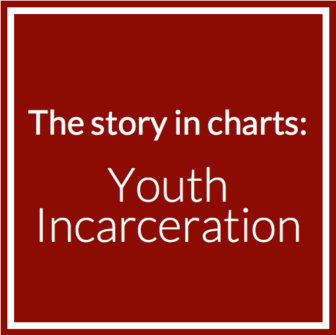 The governor’s office, which is facing considerable union pushback on a closure, declined to comment Tuesday on whether he plans to close the jail, which houses juveniles convicted of crimes not serious enough to land them in the adult system.

Malloy has regularly been noncommittal over the past year when asked about the future of the facility, saying only that, “This is not the right facility to have built” and that the intention is to incarcerate as few youths as possible there.

His commissioner who oversees the juvenile jail in Middletown told state legislators on the Committee on Children last week that the state needs locked facilities.

“Secure facilities are an important component of the juvenile justice system,” said Department of Children and Families Commissioner Joette Katz. “It should be for the most extreme situation, for the children who need the most intense supervision and therapy for interventions. but if you don’t have that you put way too much pressure on the rest of the system, including seeing them in an adult system which is really the last place you want to see them.”

Advocates who have been calling for the closure of CJTS for years point to research that overwhelmingly shows that incarcerating juveniles in large, correction-like facilities is counterproductive. The leader of the Annie E. Casey Foundation — a national leader in shaping juvenile justice policies — earlier this year called on states to close all youth prisons.

Senate Minority Leader Len Fasano, R-North Haven, said the so-called training school in Middletown only trains youth for adult prison. The governor’s policy office reports that two-thirds of those who leave CJTS end up in adult prisons within three years.

An amendment Fasano offered Tuesday that would have closed the facility by next winter was rejected by the Democratic majority in the Senate.

“CJTS is a bad facility for the kids,” said Fasano. “It’s wrong. It’s a waste of money, and we need to confront that, and they don’t want to do that. Pressure from third parties have stalled this — and it wasn’t the families.”

Democratic leaders say they have several questions about closing CJTS and the  Pueblo Unit, so the bill passed Tuesday creates a task force to study any service provided by the state that costs more than $250,000 per person per year to provide.

Non-partisan fiscal analysts report it cost the state $52.9 million in the last fiscal year to pay the CJTS and Pueblo staffs, provide them health and retirement benefits and provide services to the incarcerated youths. That translates into an annual average of $546,405 per inmate.

The legislature’s concerns center on where the high-need youths would be placed as an alternative to CJTS and what would happen to the 351 people who work at the juvenile jails.

“There is a lot of thinking to be done before its closed. If there’s a closure, where do those youth go? Also, where do the employees go? I think there’s a lot of need to study it and not act impulsively,” said Sen. Danté Bartolomeo, the co-chair of the Committee on Children, whose district includes the juvenile jails. “I am glad that it’s not in this budget.”

“Some of the thinking is that because there is more than 300 employees there, because of the fact that there’s a smaller number [of youths] there, you want to make sure you treat people with dignity and respect,” said Duff. 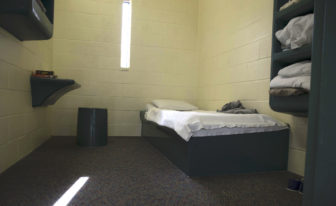 A bedroom in the intake area of the state-run jail for boys in Middletown.

Staff who work at the facility have been a constant presence at the state Capitol complex since problems started being raised in expert reviews of the facilities and after the release of videos showing youths being violently restrained.

Brian Anderson, a lobbyist for AFSCME Council 4, which represents the youth service officers at the facilities, said Tuesday he is pushing to keep the jails open.

“We are worried if CJTS closes, other facilities will not be opened. We’ve seen this in other states facing closure, and kids end up in prison,” he said. “We always try to keep people employed. We always push for no layoff language… These workers’ top priority is taking care of these children, not worrying about their own job.”