A defense of U.S. Muslims as victims of jihadist terror 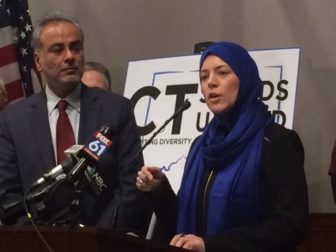 An Asian woman talked about the imprisonment of Americans of Japanese descent for three years during World War II. Noting the last night of Hanukkah, a rabbi recalled those times and places where Jews could only light their menorahs in secret. A gay man, now proudly out, talked about the days of being bullied as “the other.”

One by one, they approached a microphone in a hearing room at the Legislative Office Building on Monday, shook their Muslim host’s hand and spoke about the common roots of bigotry that now seem to fall heaviest in the U.S. on Muslims.

Seventeen men and women stood up and spoke. They represented a mix of faiths, races and ethnicities.

Muslim speakers denounced ISIS as killers who profit from the bigotry they sow in the U.S., where media seldom report that Muslims frequently are its targets.

“They hope to divide us,” said Atif Quarashi, executive director of the Muslim Peace Initiative. “This is exactly what ISIS wants.”

In Iraq alone, ISIS has killed thousands from the two main branches of Islam – Sunnis who refuse to pledge allegiance to the terrorists, and Shia who are deemed to be apostates. Muslims died in the Paris attacks, and American Muslims have died fighting as members of the U.S. military in Iraq.

“We call this press conference to discuss the false portrayal of Muslims as a threat to America. Let us be clear. Muslims are Americans, and this is also our country,” said Anwar, co-chair of the American Muslim Peace Initiative.

In the U.S., Muslims report increasing discrimination since a Muslim couple sympathetic to ISIS attacked a holiday party in San Bernardino, Calif., killing 14. A mosque in Meriden was fired upon, and some Muslim women say they fear appearing in public wearing a hijab, a traditional head scarf.

It took 22 minutes Monday before anyone got around to mentioning the anti-Muslim statements of Donald Trump or Ben Carson, Republican presidential candidates. Trump would bar Muslims from the U.S., and Carson says their religion disqualifies them from running for high office. 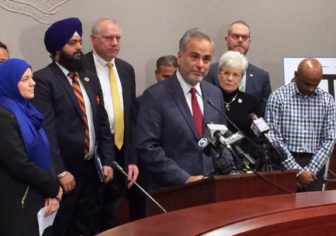 Correri questioned how political discourse in the U.S. has gone from the Lincoln-Douglas debates to the coarse, religion-baiting comments heard today: “How have we gone from that capacity to these ridiculous sound bites by Trump and Carson, where they want to alienate members of our society?”

Gov. Dannel P. Malloy, who has welcomed Syrian Muslim refugees to Connecticut, was absent. A spokesman said he was quietly marking the third anniversary of the massacre of 26 children and staff at Sandy Hook Elementary School by attending Mass.

“Hate speech has no place in America,” said Fasano, who was instrumental in the appointment of Connecticut’s first Muslim judge of the Superior Court in 2010. “When we have leaders preaching hate, there’s just no place in America, Republican or Democrat, it doesn’t matter. So, I’m proud to stand here in support.”

Steve Ginsburg, the regional director of the Anti-Defamation League, which has been fighting anti-Semitism since 1913, said the ADL is helping the Muslim Peace Initiative reach out to public schools to develop an anti-bigotry campaign.

Rabbi Debra Cantor of Bloomfield and Howard Sovoronsky, president of the Jewish Federal of Greater Hartford, also came to stand with Anwar. So did Deacon Arthur Miller, the former director of the Office for Black Catholic Ministries for the Archdiocese of Hartford, Stephen A. Glassman of the ACLU, Mui Mui Hin-McCormick of the Asian Pacific American Affairs Commission, and Imam Khamis Abu-Hasaballah of the Farmington Valley American Muslim Center.

Stan Culy, a retired Methodist minister, said attending was the right thing to do. Besides, he added with a smile, Anwar was his pulmonologist. “Getting to know him has been a pleasure and a privilege,” he said. “He’s come to our church and shared stories.”

Swarnjit Singh, a Sikh community leader from Southington, said that men in his community wear turbans and beards, which is enough to draw anti-Muslim bigotry, even if Sikhs have no connection to Islam. A Sikh temple in California was vandalized after the San Bernardino shootings, and a community elder was assaulted.

Sikhs fled India for the U.S. to escape what appeared to be officially sanctioned violence against them – Singh called it a “Sikh genocide” – after the assassination of Indira Gandhi by her Sikh bodyguards.

“In order to protect our religion, we came to this country,” he said. “And if we are not safe and sound in our America country, then where we gonna go?”

Some in the audience applauded when a reporter asked if Muslims felt judged by a double standard.

Christians leaders were not expected to denounce a Christian’s attack on a Planned Parenthood clinic. Jewish leaders were not faulted for staying silent at the murder of a Palestinian child. But the media takes careful note how Muslim leaders react to terrorism.

“I think that’s unfortunately a reality we are dealing with,” Anwar said. “The Muslim community has been under the microscope for quite some time, and that’s having an impact, so that you have to stand up against every crazy individual.”

Correri recalled the three American Muslim college students who were shot to death in Chapel Hill, N.C., where a neighnor was charged in the execution-style deaths. All were involved in their community, she said

“My question would be how American does one need to be?” Correri asked. “What’s enough? What is enough to demonstrate that you are a part of this society, that you don’t have to keep explaining your religion and explain the position of your community, to keep defending it?

“The bias is there. We are the target.”