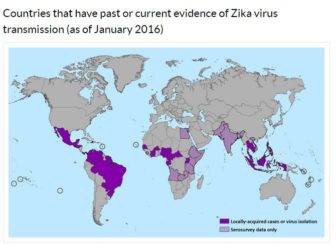 Centers for Disease Control and Prevention

The Centers for Disease Control and Prevention’s map of countries with past or current evidence of Zika virus transmission. Countries in purple have had locally acquired cases.

The state Department of Public Health has asked health care providers to report suspected cases of Zika virus – a mosquito-borne illness being investigated for possible links to birth defects in Brazil – to state and local health officials.

The virus is usually mild, but a possible link between Zika virus in pregnant women in Brazil and birth defects in their children is being investigated, according to DPH.

“All people, especially pregnant women, who are traveling to areas where Zika virus is found, should take precautions to avoid mosquito bites to reduce their risk of infection of Zika virus as well as other mosquito-borne viruses such as dengue and chikungunya,” Dr. Raul Pino, acting DPH commissioner, said in a statement Friday.

He urged people who have traveled to areas with Zika activity to get medical care if they have a fever and symptoms of the infection, which include a rash, joint pain and conjunctivitis.

The mosquitoes that typically spread Zika virus are not found in Connecticut, state officials said.

“Closely related species are present in very low numbers and are unlikely to present a risk of Zika virus infection to people,” Dr. Phil Armstrong, medical entomologist with the Center for Vector Biology & Zoonotic Diseases at the Connecticut Agricultural Experiment Station, said in a statement. “If the virus spreads to the United States mainland it will most likely be identified first in Florida or the gulf states.”

The CDC recommends that people traveling to areas affected by Zika virus use insect repellent, wear long sleeves and pants, and stay in air-conditioned areas or places with screens on windows and doors.