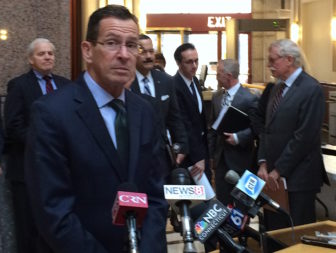 A state panel is recommending restoring tolls to Connecticut highways, raising sales and gasoline taxes, and taking other steps to finance a 30-year transportation program – but Gov. Dannel P. Malloy said Thursday he would propose none of the revenue-raising proposals in the new budget he will give legislators in three weeks.

Malloy, who commissioned the Transportation Finance Panel, and is “absolutely open” to new options to fund infrastructure improvement, said he won’t proceed until and unless legislators endorse a constitutional “lockbox” amendment to ensure such revenues are used exclusively for transportation.

“I think that the goal, this year, has got to be to get out of the legislature a constitutional lockbox with the required support to allow it to be on the ballot this year,” Malloy said after the panel reported its findings in the Legislative Office Building. “I’m not going to lead additional revenue discussions until that happens.”

But the chances of that happening are uncertain. Though a resolution to establish a lockbox cleared the legislature in special session last month, it lacked sufficient support to go before voters on the November 2016 ballot. That specific lockbox, which critics charged was too weak and would allow future gasoline tax and toll receipts still to be used for non-transportation programs, couldn’t go before voters earlier than November 2018.

Still, the governor said it is important that the transportation funding panel’s proposals, which would raise $42 billion in new revenue over the next 30 years, not be ignored. The alternative is to leave in place an aging, crowded transportation infrastructure “that ties up our economy and does not allow us to maximize our potential and fails to generate the kind of growth that other states have seen,” he said.

The panel’s recommendations – which would not begin raising revenue in any form before 2018 – include:

Tolling could take up to seven years to implement and raise as much as $18.3 billion over a 20-year period.

The panel outlined several transportation corridors where tolls could be considered, depending on which projects state officials give the highest priorities. These include:

The governor challenged the General Assembly back in February to find the revenues to enable Connecticut to spend $100 billion on transportation over the next three decades. 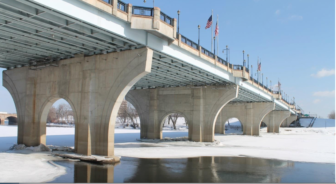 Founders Bridge over the Connecticut River between Hartford and East Hartford

That $100 billion is an omnibus figure that reflects both existing transportation operating and capital funds — both from state and federal sources — as well as projected growth.

The panel said the $42 billion in new revenue options it outlined would complement a system that currently is expected to provide about $66 billion in state and federal resources for transportation over the next three decades.

Malloy’s cautious statements about proposing any new transportation revenue in the upcoming legislative session comes on the heels of comments from some of his fellow Democrats in the House and Senate majorities. They have acknowledged that Democratic lawmakers, already nervous after narrowly enacting a new biennial budget last June that increased taxes by more than $1.3 billion, might be reluctant to endorse more revenue hikes as they seek re-election in 2016.

Former state Rep. Cameron Staples, D-New Haven, who chaired the panel said the report “is ambitious and it is absolutely necessary.”

And though he won’t propose tolls or gasoline tax increases when he submits his next budget to the legislature, the governor said no one should believe Connecticut’s infrastructure can be modernized without a significant cost.

“While some would like the public to believe you can get something for nothing, or that a best-in-class transportation system is free, that’s not the case,” he said.

The governor’s comments were aimed at Republican legislators, who have argued since last February that Connecticut could pump $37 billion into transportation over the next three decades just by redirecting existing borrowing used for other purposes.

Malloy and other transportation advocates have argued this is far too little even to maintain the current transportation system, let alone make enhancements.

“The fact that Hartford Democrats are refusing to take a vote on extremely regressive taxes and tolls that hurt the poor and middle class until after the election speaks to their obvious intent to raise taxes to pay for the governor’s transportation plan,” he said. “They don’t want to vote, because they know that their votes supporting new taxes are not what the people of Connecticut want to see. Their intention is to purposely stay silent, get elected, and then raise taxes – just like we saw after the last election.”

One of the Republican legislators from Fairfield County, which has some of Connecticut’s worst traffic congestion, also was skeptical that the public is ready to accept tolls or fuel tax hikes.

“The sentiment on that in southwestern Connecticut is not favorable at all,” said Rep. Gail Lavielle, R-Wilton. “Right now people feel they have been subjected to fairly substantial (tax) increases.”

Lavielle also said the governor and legislators should focus on a “stronger lockbox” that ensures all fuel tax receipts and other revenues traditionally assigned for transportation are used only for that purpose.

Reactions from the business community and transportation advocates ranged from cautious to optimistic.

“To be honest with you, I can’t say much at this point,” said Joseph F. Brennan, president of the Connecticut Business and Industry Association. “This is such a major thing. We need to have discussions with our membership … before rushing into something this big. Given the enormity of this, it is going to take us some time to get through everything.”

Many legislators have said the support of Connecticut’s business community is crucial for politicians to feel safe about raising new revenues for transportation — and restoring tolls in particular.

But the business community also has been critical of Malloy and the legislature because of the tax increases ordered last June and because of nonpartisan projections of another major budget deficit looming after the next election.

But Karen Burnaska, the head of the Transit for Connecticut advocacy group, said the report was an important step forward. And she predicted public support would grow if the governor and legislature can proceed with an effective constitutional lockbox this year.

“Before any revenue is raised, the public needs to regain their trust,” she said.

“What the governor has done is really good,” said Lyle Wray, executive director of the Capitol Region Council of Governments. “He has articulated a vision, said let’s have confidence that the money for it is not going to wander, and then said let’s go get the funding sources. I think that’s the sequence you need to have.”

Democratic legislative leaders echoed the governor’s call for a lockbox in their responses to the report, but didn’t weigh in on when — or if — they might support gas tax hikes or tolls.

“We now know what it is going to take to pay for the Governor’s transportation plan,” Senate President Pro Tem Martin M. Looney, D-New Haven, said. “Before we ask Connecticut residents to commit to funding transportation infrastructure, the constitutional lockbox — that was passed unanimously by the Senate but failed to garner enough support in the House of Representatives to be placed on the ballot — must be approved by Connecticut’s voters.”

“Before we even begin a debate on how to pay for it, the first step must be to establish a constitutional ‘lockbox’ so taxpayers know that any funding set aside for transportation cannot be used for another purpose,” said House Speaker J. Brendan Sharkey, D-Hamden.