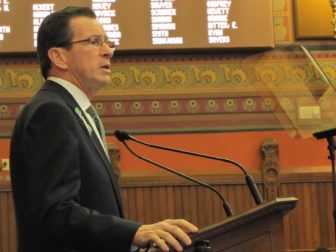 Gov. Dannel P. Malloy intends to frame his budget proposal today as a reform of Connecticut’s much-maligned and unpredictable process of budgeting, which sparked a business outcry last year, as well as a blueprint for taming unsustainable spending.

In excerpts of his State of the State speech released in advance of today’s noontime address to a joint session of the General Assembly, the governor casts his request for more discretion over spending as a desire for greater efficiencies, not unchecked executive power.

Malloy, a Democratic governor facing a Democratic majority that resisted or revised many of his spending cuts last year, is asking the legislature to give up some of its influence by appropriating funds for general governmental functions instead of detailed line items.

“By simplifying line items in the budget, we can give our top executives the ability to manage their agencies, while providing quality services to taxpayers in the most efficient way possible,” he said. “Just as any business does, our managers need the ability to lead their agency, adjust to shifting circumstances and set priorities to use limited resources in the best way possible.”

Malloy headed back on road with Budget Tour 2.0

The Mirror first reported details of Malloy’s proposal Monday. Unclear until today was how the governor would cast the idea to legislators wary of ceding budgetary authority to the executive branch, even in a time when unpopular spending cuts are likely to be a necessity.

Anticipating a suspicion that his new block-grant approach could make it harder to track spending and easier to obscure spending cuts, Malloy pledged real-time transparency in how the agencies choose to spend their appropriated funds – even if legislative oversight would be limited.

“The bill I submit to you today will require agencies to post online detailed, meaningful, timely information about how they are spending the people’s money, and precisely what that money is accomplishing,” Malloy said.

Accountability should rest with the executive branch, he said.

Malloy urged the legislature to avoid the frenetic process that yielded the passage of business tax increases on the final day of the session last year. Their impacts, House Speaker J. Brendan Sharkey later acknowledged, were not fully understood, especially how hard a data processing tax would hit the state’s insurance industry. It was later revised when legislators hurriedly returned for a special session.

“No budget will be perfect, but I firmly believe that by changing how we come to a budget bill, we can improve the final result,” Malloy said. “So this is my challenge to you and to me. Let’s not pass a budget on the final day of this session this year. Let’s get it done early.”

The excerpts released by Malloy’s office reinforced what the governor has been saying in recent weeks about an austere budget.

“Families and businesses do not set their budget based on the amount of money they want to have next year. Neither can the State of Connecticut,” he said. “My budget limits spending in the upcoming fiscal year and beyond to actual revenue projections. In other words, this budget is based not on how much we want to spend, but how much money we actually have to spend.”

The excerpts hint at a difficult competitive funding process for the non-profit agencies that greatly supplement state government.

“Together we must concentrate on the core functions of state government, namely: protecting the public, ensuring a social safety net, building a strong economy, safeguarding our environment, providing a public education, and administering justice,” he said.

Legislators traditionally direct funding to certain non-profits through line-item budgeting Malloy is proposing to end. The governor said such funding must be strictly assessed on performance and need.

“To that end, functions that fall outside of those core services must be considered on merit alone,” Malloy said. “We must transition toward making recipients of state funding compete for available dollars based on proven results.”

He was both conciliatory and challenging to the Republican minority, whose leaders complained of being shut out of meaningful budget negotiations.

“No one party, no one leader, and no one individual holds a monopoly on good ideas,” he said, pledging an open door to leader of both parties.

But he also warned legislators not to make complaints without offering alternatives.

“During the session, we can either be part of the solution, or stand on the sidelines throwing stones. We cannot do both,” he said. “We can’t be opposed to tax increases, but unwilling to cut the spending those taxes support. We can’t be for reining in spending, but oppose cuts in any one line item. We must be honest about the challenges we face, and work together to address them.”