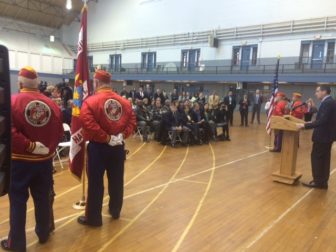 As Gov. Dannel P. Malloy and the General Assembly debate what government’s core responsibilities are in an era of dwindling revenues, the federal government has certified Connecticut as the second state to effectively end homelessness among veterans.

“This is Neil Armstrong walking on the moon kind of stuff,” Richard Cho, the deputy director of the U.S. Interagency Council on Homelessness, told an audience Thursday in the drill shed of the State Armory in Hartford.

The moon shot comparison may be overwrought. President Obama’s declaration in 2014 that the U.S. should be able to house all veterans by the end of 2015 yielded no new technologies or silver-bullet approach to coping with a significant sliver of the seemingly intractable problem of homelessness.

But, in a time when polls show flagging confidence in government, state and federal agencies worked with non-profit providers to build what Cho’s agency says is “a sustainable system” to continually identify homeless veterans and provide stable, permanent housing within 90 days.

“Yay for us! Yay for Connecticut veterans!” Laurie Harkness, the founder and director of the federal Veterans Administration’s well-regarded community care program in Connecticut, told the audience dominated by service providers. “But yay also for homeless people in general, because we do now, as people have said, have the blueprint.”

Malloy promised to maintain support for the unusual interagency campaign to end homelessness among veterans, even as Connecticut copes with a fiscal crisis certain to mean other government services will be curtailed. But Malloy said one lesson of the success is that money is only part of the story.

“We made it a priority. It continues to be a priority. We will fund these programs for the amount of money necessary to have them prosper,” Malloy said. “Having said that, as this effort has proven, we can do things far more efficiently when we get outside the boxes we have otherwise put ourselves in.”

Obama issued a challenge to governors and mayors of eliminating veterans’ homelessness by the end of 2015. Last year, Connecticut was the first state certified as ending chronic homelessness for veterans, which was defined as being homeless for a year or for four times in several years.

The declaration that Connecticut now is the second state after Virginia to effectively eliminate all veterans’ homelessness comes after a much longer effort by service providers, as well as investments by the Malloy administration that have helped preserve, rehabilitate or build more than 15,000 units of affordable housing.

Harkness was among those singled out by Malloy for building a system that allows Connecticut to claim veterans’ homelessness effectively is over, even if no one claims no veteran ever will fall into homelessness.

“It means making it rare, brief and non-recurring,” said Alicia Woodsby, the executive director of the Partnership for Strong Communities, a non-profit dedicated to ending homelessness. “And that’s the target we’re shooting for and have met for veterans in Connecticut.”

Last year, one of Malloy’s other priorities, a second chance initiative for criminal offenders, fed into the veterans effort: The state Department of Correction opened a 110-bed community reintegration unit that helps vets in prison prepare for release. Nearly 800 veterans are in prison in Connecticut.

“It was developing a more efficient structure. In the past, those 800 veterans were scattered all through the state. My re-entry staff were going to every prison. It was so inefficient,” Harkness said. “By putting everybody together, not only do we have a more effective system, veterans are being discharged from incarceration with housing, with healthcare, skills, jobs. It just makes sense.”

Malloy, who made affordable housing a priority after taking office in 2011, said he signed onto Obama’s challenge program at the urging of Luke Bronin, an Afghanistan veteran who was his general counsel before resigning to successfully run for mayor of Hartford last year

“When he was my counsel, [he] urged that we join this effort and convinced me that we could do it, and that we ought to do it, and even if we couldn’t do it, we should try to do it,” Malloy said.

The governor said the state’s new goal is to eliminate all homelessness in the next year, using the same model: a holistic approach to assess the needs of, and find appropriate services for, the homeless.