Malloy to get JFK ‘Profile in Courage’ for refugee stand 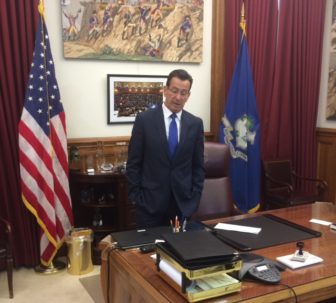 Gov. Dannel P. Malloy after his selection for the JFK award became public.

Gov. Dannel P. Malloy will be awarded the John F. Kennedy Profile in Courage Award for his decision to publicly welcome a Syrian refugee family to Connecticut after the governor of Indiana opposed a plan to relocate them to his state.

“I think what I have always stood for is a more inclusive society, where people recognize their obligations to one another, whether it’s on the transgender recognition or other human rights issues or second chance or, quite frankly standing up to a fair amount of ignorance on the refugee issue, these issues are all important to me,” Malloy told reporters Monday.

Malloy is the second Connecticut governor chosen for the award bestowed by the JFK Library Foundation. Lowell P. Weicker Jr. was honored in 1992 for his unpopular stand the previous year in favor of Connecticut’s first broad-based income tax.

Malloy will be presented the award on May 1 at the JFK Library in Boston by Jack Schlossberg, the grandson of the president and son of Caroline Kennedy Schlossberg, who is now the U.S. ambassador to Japan. Malloy was aware of the honor for some time, but it was not announced until Monday morning. 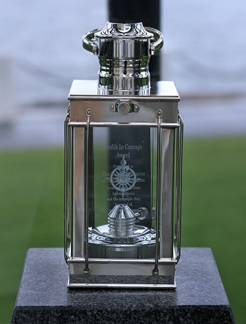 The award is a sterling silver lantern produced by Tiffany and modeled after those found on the U.S.S. Constitution

“As half of U.S. governors, leading presidential candidates and countless others across the country voice support for a ban on Syrian refugees from entering the United States, Gov. Dannel Malloy took a stand against the hateful, xenophobic rhetoric,” Jack Schlossberg said in a statement.

“In doing so, he put principles above politics and upheld my grandfather’s vision of America that, he said, ‘has always served as a lantern in the dark for those who love freedom but are persecuted, in misery, or in need’.”

Malloy personally welcomed the family to New Haven in November, then held a press conference to decry what he called an overreaction to terrorist attacks in Paris.

“Not every American and not every American governor is the same,” Malloy said then. “I assured them that not only was I welcoming them, but I was proud that they’ve come to the U.S. and come to Connecticut. I told them that people in the United States are generous and good people, but sometimes things happen elsewhere that cause people to forget about their generosity and forget about their native warmth and spirit.”

Malloy said he believed the JFK Library chose him in part to make a broader statement about religious tolerance in a presidential campaign season in which Donald J. Trump, the leading contender for the Republican presidential nomination, has proposed barring immigrants on the basis of their Muslim religion. 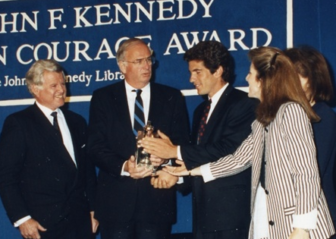 Lowell P. Weicker Jr. receiving the award in 1992 from the Kennedy family.

“Fundamental to being an American is appreciating peoples’ rights to practice their religion. It’s fundamental. It’s who we are,” Malloy said. “To hear some of the comments being made on the Republican side is a scary proposition.”

News of the award comes as Malloy’s approval rating has sunk to 32 percent, though that is generally attributed to the fiscal condition of Connecticut, not his stand on refugees.

The award has been given annually since 1990. The first recipient was Carl Elliott Sr., an Alabama congressman who was vilified and his career ended by his advocacy of civil rights and federal financial aid for college that provided educational opportunity for minorities and the poor.

Malloy said he did not know how much courage was required for his stand on the refugees, but his stand brought him more praise than vilification, including a personal call from Cardinal Timothy Dolan, the archbishop of New York.

Malloy, 60, who was narrowly elected in 2010 and re-elected in 2014, has struggled for nearly six years to stabilize the state’s finances after the recession of 2008 to 2010, raising taxes and cutting services, which has cost him politically.

He was won national notice, however, for his support of gay rights and what he calls his “second chance” criminal justice reforms.