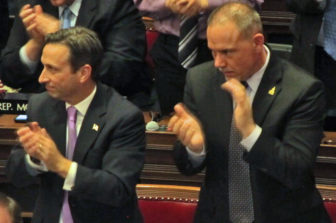 House Democrats gathered on a college campus in East Hartford to hear a private presentation Thursday about the mood of the Connecticut electorate from a prominent pollster. Senate Democrats got their own briefing at the Capitol.

The news from Al Quinlan, the president of Greenberg Quinlan Rosner Research, surprised no one. Voters are unhappy with Gov. Dannel P. Malloy, and they see pretty much every issue paling in importance next to the state’s business climate.

One of the issues tested against the importance of growing the economy is a favorite of progressives and a bane of business advocates: a bill requiring employers to offer paid family medical leave, a benefit that would be paid for by workers through a payroll deduction of 54/100th of one percent.

The Democratic majority leaders, Sen. Bob Duff of Norwalk and Rep. Joe Aresimowicz of Berlin, are on record as supporters of paid family medical leave, but both say the bill is unlikely to go forward, at least not in the final three weeks of this unsettled legislative session.

“I think it’s in line with what our core beliefs are. I think folks in this state deserve and want time for sick family members,” Aresimowicz said. “Now, is this the particular year to move forward, given all the other issues we’re dealing with? The fiscal note itself makes it almost impossible.”

As written, the bill carries a fiscal note from the legislature’s Office of Fiscal Analysis estimating the program would cost the state about $12 million in start-up expenses and nearly $19 million annually for the state Department of Labor to administer.

“In this budgetary atmosphere, the price tag is too high,” Duff said. “And at a time when state employees are being laid off, it would require an additional number of new hires to run any kind of serious paid family medical leave program.”

Sen. Mae Flexer, D-Killingly, a chief sponsor, said the backers are trying to find a way to enact the program without administrative support from the state.

“We’re trying to find a private option,” she said.

Duff and Aresimowicz declined to release the poll that was jointly commissioned by their caucuses, but its findings were summarized for The Mirror by other sources.

Quinlan presented no bombshells. Malloy, now trying to negotiate a difficult budget with a restive legislature, has an approval rating just above 30 percent, as he did in the last public poll by Quinnipiac University in October. Quinlan did not make a case for attempting ambitious legislation in a session that has produced few new laws.

AARP, part of a coalition trying to pass a family medical leave law, released its own poll the previous day showing support for the concept across party lines: 93 percent of Democrats, 66 percent of Republicans and 80 percent of unaffiliated.

Flexer, Sen. Beth Bye of West Hartford, Sen. Cathy Osten of Sprague, the Working Families Party and others have argued that passing paid family leave would be good re-election politics and good policy. Connecticut was the first state to require unpaid family leave, guaranteeing parents time off at the birth or adoption of a child or to care for a sick family member.

AARP’s state director, Nora L. Duncan, said her group’s poll was commissioned long before she was aware of the Democrats’ survey.

“We were happy to have the data at the right time,” Duncan said. “We always want to have relevant polls. Sometimes they come in at exactly the right moment, and sometimes they don’t.”

But eliminating the fiscal note will not erase the opposition of business and its claim of harm to the business climate, an argument that did not dissuade Malloy and the legislature in 2011 from passing the nation’s first state law requiring private employers to offer paid sick days.

Eric W. Gjede of the Connecticut Business and Industry Association submitted testimony last month to the legislature’s Labor and Public Employees Committee, saying more than 70 business associations and chambers of commerce are opposed.

“As many state rankings have shown, operating a business in Connecticut is often more costly than running the same business in other states,” Gjede said. “With each additional workplace mandate we adopt, the cost separation between Connecticut and other states increases. Despite claims to the contrary, this new mandate is not good for business. This tilts the playing field against Connecticut businesses to other states — typically ones that are not forcing such mandates on their businesses.”

Supporters at the same hearing included a cross-section of progressive activists and one member of Congress: U.S. Rep. Rosa L. DeLauro, D-3rd District. She is sponsoring a similar bill that is unlikely to go forward in the Republican Congress.

California, New Jersey and Rhode Island have paid family leave laws, while Washington state has a law on the books that has not been implemented. DeLauro said the Rhode Island law passed with business support.

The New York budget deal signed into law last week by Gov. Andrew Cuomo includes a family leave provision that will give workers up to eight weeks of paid leave at half pay in 2018, with the benefit expanding to 12 weeks at 67 percent pay in 2022.

Lindsay Farrell of the Working Families Party, which is funded by labor unions, said Massachusetts is considering a similar paid leave law. Using one of the arguments business made against the sick day law, advocates are trying to convince the legislature’s leadership that Connecticut could become the regional outlier without a family leave law.