Bill Clinton, in Hartford, praises Sanders as a positive 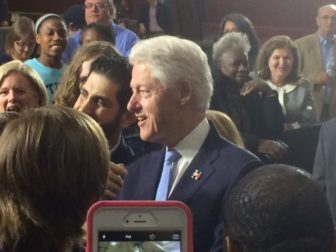 Bill Clinton praised Bernie Sanders at a campaign stop in Hartford on Monday, the day before primaries in Connecticut and four other states, saying the Vermont senator has broadened the Democratic base, even if it has come at the expense at times of his wife, Hillary Clinton.

“I think the debate we’ve had, it’s a dramatic contrast to the Republican debate, and I think it’s been very good. It’s energized the party. It’s brought a lot of attention and interest to it,” Clinton said. “We’ve talked about how we’re going to create more jobs, raise incomes, reduce inequality, make college affordable, get the universal health care that works for the most Americans. How you’re going to do it. How you’re going to pay for it. These things really matter.”

Clinton made the comments in response to questions from The Mirror as he left an event with former U.S. Rep. Gabby Giffords and her husband, the former astronaut, Scott Kelly

“They’ve disagreed on some things, like gun safety measures and other things. But they voted 93 percent of the same in the Senate, and the things they debated passionately, I think have taught the American people who followed them more about the issues. I would say on balance, it’s been a big plus,” Clinton said. “We’ve got a lot of young people interested in it. You know, I think it’s been good for the Democratic party. But more importantly, I just think it’s been good for the people. At least there is one substantive debate going on.”

Clinton declined to say if Sanders should step away from the campaign if he loses decisively Tuesday, when voters go to the polls in Connecticut, Delaware, Maryland, Pennsylvania and Rhode Island. He said that was “not for us.”