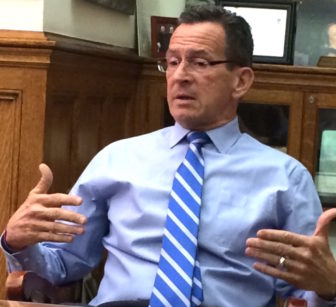 A somber Gov. Dannel P. Malloy declared late Friday night that budget negotiations with legislators “are hitting a wall,” and he predicted the General Assembly would adjourn Wednesday without adopting a budget he could sign, thereby failing to avert a nearly $1 billion deficit.

And unlike recent statements when the governor warned he would force lawmakers into special session indefinitely until they agreed to cut spending, Malloy struck a more uncertain tone about Connecticut’s fiscal future.

“Unless something changes dramatically in the next few hours, I supposed what I’m saying is I don’t think we can get to a negotiated settlement” on the budget for the fiscal year that begins July 1, the governor told reporters in his Capitol office.

“In which case,” Malloy continued, “folks can either decide to come back to the table or take whatever steps they need to take.”

What steps did the governor anticipate legislators might take?

At issue is a preliminary budget for the 2016-17 fiscal year that nonpartisan analysts say is $960 million, or more than 5 percent, in deficit.

The governor, his fellow Democrats in the legislature’s majority, and Republican lawmakers, all insist they won’t consider tax hikes this session.

But Malloy said majority lawmakers also won’t consider enough spending cuts to stabilize finances in the long-term. A Democratic budget unveiled Thursday relies on hundreds of millions of dollars in fund sweeps and revenues from other one-time sources.

“People are treating this simply as a revenue issue when in fact it’s a revenue issue and a spending issue,” the governor said, a point he would emphasize repeatedly during the 20-minute briefing. “We can talk about where to identify one-time revenue, but unless you’re going to address the spending side of the equation, which I have done repeatedly, then it makes it impossible to get to a budget that I could support.”

And although the governor did not discuss specifics of his administration’s closed-door negotiations with legislative leaders, a source close to the talks said Malloy offered reductions in arguably the largest initiative of his second term.

The governor proposed a 30-year capital program to rebuild Connecticut’s transportation system, and the Special Transportation Fund is slated to receive about $100 million in additional resources next fiscal year.

“You can one-time the budget, but you can’t do it to the extreme in these circumstances,” the governor said.

Democratic legislative leaders indicated that they wanted negotiations to be resolved by noon on Saturday if there were to be any chance of resolving the budget before the session ends at midnight Wednesday, Malloy said.

But top lawmakers responded Friday that they would not abandon hope and would continue to negotiate with the governor.

Senate President Pro Tem Martin M. Looney, D-New Haven, said the legislative leadership has made concessions on spending and will keep negotiating with the administration.

That was Malloy’s reaction after House Speaker J. Brendan Sharkey, D-Hamden, dismissed one of the governor’s earlier plans.

Looney said the legislators never gave Malloy a hard deadline of midday Saturday for coming to a deal; they only suggested it would be best to meet that timeframe, given how long it takes to produce a budget once a deal is struck. 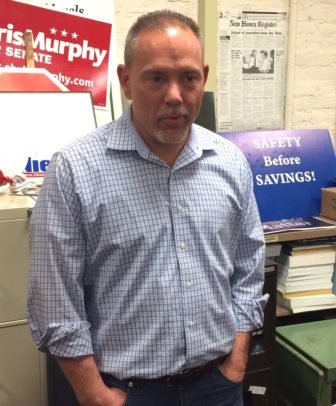 House Majority Leader Joe Aresimowicz of Berlin says he is still optimistic about coming to a budget agreement.

He said failure to reach a deal by late Sunday probably would mean the General Assembly would reach its constitutional adjournment deadline without a budget.

“I’m very optimistic. I think we really look forward to the opportunity to have the discussions,” said House Majority Leader Joe Aresimowiz, D-Berlin. “It almost seems a little disingenuous to have meetings in one room and then be saying we’re far apart.”

All seats in the General Assembly involve two-year terms and are up for election this November.

The governor won a second, four-year term in 2014 and is not up for re-election this fall.

But while the chief executive did not refer specifically to the much larger deficits nonpartisan analysts are projecting for the 2017-18 and 2018-19 fiscal years — gaps exceeding $2.2 billion in each year — he made it clear lawmakers must focus on the big fiscal picture.

“This is a post-recession recovery that is unlike any other,” Malloy said. “I’m trying to lead them to understand that this is not a short-term problem, that this is a long-term problem. … At some point these problems build onto themselves.”