Connecticut’s ground-breaking Green Bank – a first-in-the-nation model being replicated nationally and internationally – is facing the loss of 65 percent of the next fiscal year’s funding in the latest state budget proposal from Democratic legislators.

The proposed cut has brought vehement opposition from both the business and environmental communities – groups that often disagree on energy matters. They say that the cuts are either exorbitant or that this particular money shouldn’t be touched at all, pointing to the way the bank both gets and uses its money.

Neither of the bank’s two principal sources of funding comes from taxpayer dollars. Most comes from fees consumers pay on their electric bills. A much smaller amount comes from the price power plants in Connecticut pay to pollute.

While some of the money it gets walks out the door as grants, most is leveraged in different ways to hopefully make more money, but also in ways that make the bank self-sufficient. There are loans, loan guarantees, and ways to help projects gain investors that will eventually be repaid. But without its regular infusion of money, which is limited when you’re talking about generally expensive energy projects, the bank has few ways to expand its reach.

The bank has leveraged the money it’s received by a factor of 10 or more to be used for programs it’s created and administers. It is seen as a money, business, jobs and therefore tax revenue creator – as well as a way to expand clean energy and make a dent in stopping climate change.

“The latest proposal to cut funding from the Connecticut Green Bank would certainly hurt the organization,” Bryan Garcia, Green Bank president said in an email. An earlier Finance, Revenue and Bonding Committee proposal would have taken about $5 million from the bank to use for state operating expenses. The budget released last week ups the sweep to nearly $21 million, half of a $42 million sweep for the bank and other energy efficiency programs managed separately.

“I’d be remiss if I said it wasn’t unsettling, but the fact is, it’s out of our hands,” Garcia said. “We’re hopeful though that all the good work we have done will ultimately speak for itself.”

The bank has been in budget-plugging crosshairs before – most recently in 2013. But political outrage similar to that occurring now resulted in replacement of most of the swept funds.

Calling the bank “one of the most successful innovations any state government has created in decades,” Eric Brown of the Connecticut Business and Industry Association labeled the Green Bank raid “a bad idea.”

“If the state wants to make adjustments to how ratepayer funds are allocated,” Brown said. “It should make sure more of those dollars go to the Connecticut Green Bank – not less.” 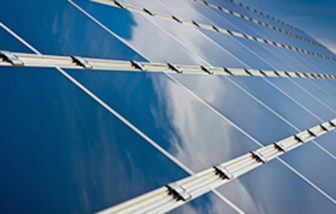 The Green Bank is essentially the second generation of what had been the Connecticut Clean Energy Fund. Like the Fund, the bank is quasi-governmental. It was created in 2011 in the same legislation that expanded the old Department of Environmental Protection into the Department of Energy and Environmental Protection – signature legislation of Gov. Dannel Malloy’s first year in office.

The basic funding for the Clean Energy Fund, and now the bank, is about $27 million in electric ratepayer fees. The fund used the money for incentives for residential and commercial clean energy projects. When the money ran out – which it inevitably did – that was it.

The bank was designed to take that same money and leverage it through investments, loan programs and other means so it would not only not run out, it would actually grow. The latest budget sweeps $15 million of those funds.

The bank primarily handles the state’s residential solar program. (Commercial solar is now handled separately.) Data from the bank show that its funding stream since 2011 has helped finance about 17,000 solar projects totaling 130 megawatts and creating more than 8,500 direct and indirect job years.

The bank also gets money through the Regional Greenhouse Gas Initiative (RGGI, pronounced reggie) – the nine-state program that caps power plant emissions. The plants pay for the right to pollute through quarterly auctions. Under RGGI guidelines, at least 25 percent of the auction proceeds must be used for energy-related programs. In most cases they have involved energy efficiency.

In the seven years of the RGGI program, Connecticut has taken in more than $160 million. It allots 69.5 percent of RGGI funds to energy efficiency, 23 percent to the Green Bank and 7.5 percent to other energy programs and administration. The Green Bank uses its RGGI portion for yet another renowned program – Commercial Property Assessed Clean Energy, or C-PACE.

C-PACE allows commercial properties to finance clean energy projects that they pay for through assessments on their property tax bills. If the property is sold, the payment transfers to the new owner.

The initial Finance Committee proposal swept about $22 million in RGGI funds into the state’s General Fund, which pays for most of the state’s operating expenses. The most recent Democratic proposal increased that to $27 million. The Green Bank would lose about $6 million of that total.

The four RGGI auctions in 2015 brought about $29.9 million to Connecticut. The $22 million sweep would have just barely maintained the 25 percent minimum of RGGI funds that are supposed to go to energy programs. A $27 million sweep would drop below it.

Some worry that if auction prices continue to fall, as they have lately (the first auction of 2016 netted some of the lowest proceeds in several years) that the sweep could actually exceed RGGI proceeds.

Rep. Lonnie Reed, D-Branford, co-chair of the Energy and Technology Committee called what she termed “cannibalizing” the Green Bank “outrageous and beyond counter-productive.”

Reed, who is also a member of the finance committee, voted in that committee for the initial budget version that stripped the $22 million in RGGI funds. She said it was part of a deal with the committee co-chairs to move the legislation in order to begin negotiations.

“Looting the Green Bank will drive investors away, kill green projects that are now being negotiated and destroy an incredibly innovative and successful economic engine,” she said. “How shortsighted is this? There are no words.”

The environmental and solar community had plenty of words, most of them focused on jobs.

“The Green Bank pretty much turns water into wine, but lawmakers in Hartford want to cut their budget in half,” said Mike Trahan, executive director of Solar Connecticut, an industry group whose members stand to be hit the hardest. “Do that, and you’ll see a hundred solar workers show up in the unemployment line the next day and maybe a hundred more the following week. What business wants to stay in Connecticut and get jerked around whenever the state budget doesn’t balance? It’s insane.”

Chris Phelps of Environment Connecticut said raiding the bank would have an indirect impact on many kinds of jobs. “The fuel cell sector is threatened by this,” he said. “Jobs all across the clean energy sector will be threatened.

Leah Lopez Schmalz, program director at Connecticut Fund for the Environment, said she thinks legislative leaders need some education about the bank and how it works.

“I realize we have this massive chasm,” she said of the budget shortfall. “But I don’t understand why raiding the bank is still in the conversation.”

The bulk of the RGGI funds sweep would actually come from money destined for the Connecticut Energy Efficiency Fund. While the amount is sizeable, about $19 million, it is a much smaller portion of the fund’s budget – about 10 percent.

Jobs are a key issue for people like Leticia Colon de Mejias, founder and CEO of Energy Efficencies Solutions, an energy conservation company in Windsor that specializes in providing services to low-income people. Efficiency services to her clientele are heavily subsidized through the Energy Efficiency Fund.

“I would have to lay off at least half of my staff,” Colon de Mejias said. She has 37 employees, many of whom she plucked from unemployment rolls and spent money to train.

Companies like hers speak to the issue of energy savings, calculated to be nearly $4 lifetime for every $1 invested in efficiency. And that has a bearing on overall energy load for the electric grid. The less energy efficiency in place, the more conventional power that’s needed, and that would probably mean higher electric rates for consumers.

There’s one more factor weighing on a potential RGGI raid: regional politics. It may seem arcane, but could have a direct bearing on Connecticut’s future finances.

RGGI is going through its regular program review right now. Connecticut’s energy chief, Katie Dykes, is also the current chair of RGGI’s executive committee. That means she is the point person for convincing the nine RGGI member states to lower the emissions cap on power plants, a move that would probably increase auction proceeds.

But if Connecticut raids its RGGI money to help close its budget hole, and especially if it goes below that 25 percent level for energy programs, many worry the state will no longer have the political credibility to push the other RGGI states.

“These short-sighted cuts to Connecticut’s energy efficiency programs will harm consumers and the state’s reputation for energy and climate leadership,” said Bill Dornbos, Connecticut director of the Acadia Center, a regional environmental group and longtime RGGI watchdog.  “The raid will increase energy waste, stop or slow crucial clean energy projects, and undermine Connecticut’s clean energy and climate credibility at a time of increasing attention to the otherwise-successful RGGI program.”