A Berkeley professor tries to explain Trump to labor in Hartford 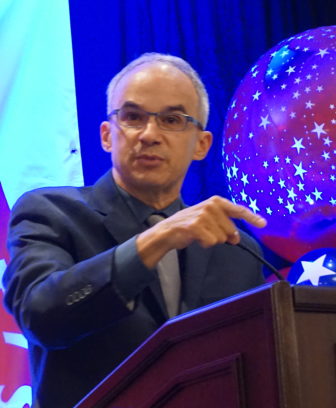 Ian Haney Lopez is a law professor at UC Berkeley, a high school and Harvard law classmate of Barack Obama’s and the author of “Dog Whistle Politics,” a historical analysis of the coded racial appeals politicians make to white voters

He talks a lot about Donald J. Trump these days, not always in ways one might expect.

“On the one hand, clearly Trump is engaging in dog-whistle politics. That’s the basis of his entire campaign,” Haney Lopez said after a presentation last week to union activists in Hartford. “At the same time, the media analysis so far is relatively unsophisticated.”

Trump’s campaign is aimed at boosting white voter turnout, in part by luring the disaffected back to the rolls of active voters. To do so, Haney Lopez said, the presumptive Republican presidential nominee has been coy about his endorsement by an avowed racist, David Duke; he has blamed immigrants from Mexico for a host of ills, economic and otherwise; and attacked a federal judge on the basis of his Mexican heritage. And this week Trump suggested after the Orlando massacre that President Obama had some dark motive in defending the Muslims whom Trump would bar from the U.S.

“There’s something going on,” Trump said.

But the professor disagrees with commentators who dismiss Trump’s appeal to many white voters as simple racism.

To Haney Lopez, it is more important for the left to deconstruct Trump than to denounce him.

Haney Lopez was in Hartford last week at the invitation of Lori J. Pelletier, the president of the Connecticut AFL-CIO. She met Haney Lopez while serving as a member of the national AFL-CIO’s commission on race and economic justice.

Pelletier says it is important for union leaders to understand Trump’s appeal to working class whites, including members of the labor movement. At the state AFL-CIO’s political convention last week, one of the workshops was about how to talk to union members about Trump.

“When I saw Dr. Lopez’s presentation for the first time last October, it was eye-opening to me,” she said. “We often ask ourselves why do our members sometimes vote against their own best interests. To me, his presentation answered a lot of that.”

The subtitle of “Dog Whistle Politics” is “How Coded Racial Appeals Have Reinvented Racism & Wrecked the Middle Class.” His thesis is that subtle racial appeals have been used since the early 1960s to stoke class resentments, undermine confidence in social programs and break up the New Deal coalition that served Democrats and labor.

So, HaneyLopez brought his power-point presentation about race, politics and dog whistles to Hartford.

“This is not a story of bigotry,” he told his labor audience. “It’s a story of strategy, cold calculating strategy.”

To win, Trump probably needs 65 percent of the white vote, a significant jump from the 59 percent that went toRomney in 2012. Haney Lopez says the Republican desire to turn out the white vote is obvious: Gallup surveys of 338,000 people in its daily tracking polls of 2012 found non-Hispanic whites accounted for 89 percent of Republican self-identifiers nationwide, compared to 70 percent for independents and 60 percent for Democrats. Haney Lopez says the GOP has only grown whiter.

U.S. Sen. Barry Goldwater of Arizona, who had voted for civil rights legislation in 1957 and 1960, was one of only five senators from outside the South to vote against the Civil Rights Act of 1964, the same year he was the GOP nominee for president. He lost in a landslide, but established a beachhead in the Democrats’ solid south, carrying Louisiana, Georgia, Alabama, Mississippi and South Carolina. 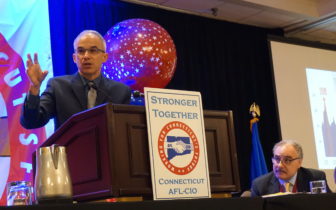 Ian Haney Lopez of the University of California at Berkeley speaks to labor delegates in Hartford. At right, Sal Luciano of AFSCME listens.

Richard Nixon won in 1968 with a southern strategy that included opposition not to integration, but to “forced busing,” and an appeal to law-and-order voters that suggested that protesters, whether for civil rights or against the war in Vietnam, were simply lawbreakers.

In 1980, Ronald Reagan’s first speech after the GOP convention was at the Neshoba County Fair, about seven miles from Philadelphia, Miss., where three civil rights workers were murdered. He declared, “I believe in states’ rights.”

Conservatives complain that liberals like Haney Lopez wrongly make Reagan’s appearance at a popular county fair into something nefarious. They note that Democrat Michael Dukakis campaigned at the same fair in 1988, and that days after going to Neshoba Reagan told the Urban League in New York, “I am committed to the protection of civil rights of black Americans.”

State Senate Minority Leader Len Fasano, R-North Haven, who has tried to broaden the GOP base in Connecticut with an urban policy and attended a solidarity event sponsored by the Muslim community, declined the chance to go to Cleveland next month as a Trump delegate, but he also declined to talk to Trump.

“I do the Tip O’Neill, ‘All politics are local.’ I would take the position the Democratic Party policies in Connecticut for the last 40 years have failed our cities, failed our poor and failed our minority population. I think we have a better message and a better plan. I think we actually care more,” Fasano said. “I can’t speak to the national level.”

But Haney Lopez says Reagan often spoke of “welfare queens” and during his unsuccessful run in 1976, he described the frustration of working people angry about a “strapping young buck,” code in the south for a large black man, buying a T-bone steak with food stamps while they settled for hamburger.

Haney Lopez said Democrat Bill Clinton, a former governor of Arkansas, played the same tune on his dog whistle when he promised to “end welfare as we know it.”

The professor told the labor audience that a liberal egghead professor from Berkeley, he is not the man to deliver that message to a wide audience. The union men and women laughed.

“What does this mean for unions, this convincing people racism is a divide and conquer weapon? What it means for unions is that race isn’t just incidental to the union fight for better quality of life for everybody. Race is central to it,” Haney Lopez said. “And I want to be very clear. I know there is a debate in unions. Do we put race first? Do we put class first? And I’m saying, ‘Yes, we put them both first.’ You cannot have a conversation about the fate of the working class in the United States without talking about racism and economics together, simultaneously. That is what unions are in the best possible position to do.”