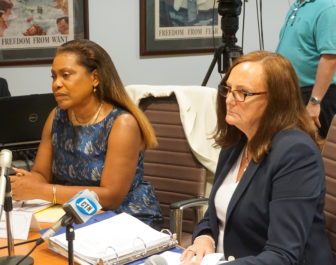 Insurance Commissioner Katharine L. Wade’s first contact with state ethics officials was to inform them in September why she intended to act on the merger of Anthem and Cigna, not to seek a ruling on whether they saw a potential conflict because of her family’s long association with Cigna.

Now, while she’s deep in the review of a merger that could create a $50 billion company and transform the health insurance industry, Wade is going to get the legally binding ethics opinion that she and the administration of Gov. Dannel P. Malloy never saw the need to request from the state Citizens Ethics Advisory Board.

The board voted unanimously Thursday to grant a petition by Common Cause, one of the advocacy groups that have questioned the impact of the merger on consumers and the propriety of Wade’s role, to review her status and issue a declaratory ruling on whether she must recuse herself.

“We have always said, consistently, that if the ethics commission identified a problem, then we would undoubtedly follow its guidance. So far, that has not been the case,” said Devon Puglia, a spokesman for Malloy. “However, as we’ve always said, should ethics choose to reverse course or change direction from the guidance they have previously given the commissioner, then we would absolutely follow it.” 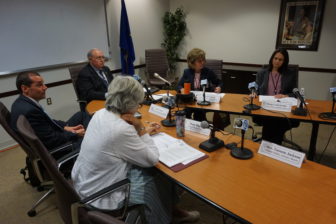 The Citizen’s Ethics Advisory Board

The vote came on the same day that Dave Jones, the insurance commissioner of California, urged the U.S. Department of Justice to block the deal, saying the merger of the second- and fourth-largest health insurers would be anti-competitive and harm his state’s health insurance market.

If the merger goes through, Anthem would control more than 50 percent of the market in 28 California counties and 40 percent in 38 counties, Jones said.

“When it comes to the Anthem and Cigna merger, bigger is not better for California’s consumers or the health insurance market,” Jones said.

Wade, who has been designated as the lead state regulator, is ultimately responsible for assessing whether the merger meets standards set forth in the Insurance Holding Company Act after a staff review and public hearing.

A month before Malloy nominated her as commissioner, his general counsel, Karen K. Buffkin, did contact ethics officials to informally explore what complications might arise from appointing Wade. On Feb. 10, 2015, Buffkin sent a letter to Barbara Housen, the chief counsel at the Office State Ethics, under the heading of “informal opinion request.”

Katharine Wade with Gov. Dannel P. Malloy at the announcement of her selection as insurance commissioner

Without identifying Wade by name, Buffkin laid out her personal history and outlined how the nominee would approach her former employer, which also went unnamed:

Housen told the board members Thursday that she and her legal staff now would review Wade’s status and draft a declaratory ruling for them to consider. Such rulings are binding, but can be appealed to the Superior Court. Wade was not present, nor did anyone address the board on her behalf.

Cheri Quickmire, the executive director of Common Cause in Connecticut, declined to address the board, saying her petition was self-explanatory.

“I think there are enough questions about a conflict of interest, that it should be reviewed,” she said after vote. “And I am pleased they are planning to do that.”

Under state ethics rules, Wade clearly falls short of one standard that would disqualify her: She does not have “an association” with Cigna, which is defined as possessing an ownership interest of 5 percent or acting as a senior corporate officer.

In a letter she wrote to the Office of State Ethics on Sept. 23, 2015, advising them of her decision to “review and take action” on the merger that would give Anthem control of Cigna, Wade said she could “participate fairly, objectively, and in the public interest.”

Her rationale, in part, was that the focus would be on Anthem, the acquirer, and she had never been employed there. Also, she noted that the review process “is public, transparent and permits comment from interested parties.” Lastly, she said she did not have “a substantial conflict,” the legal standard in Connecticut.

Wade would have to recuse herself if she believed she, her husband, a dependent child or an associated business would “derive direct monetary gain or suffer a direct monetary loss” as a result of her official action.

Tom Swan, the executive director of Connecticut Citizen Action Group, said he sees no evidence that Wade has looked at the impact on consumers.

“As the lead regulator, she is serving as their lobbyist still,” Swan said. “I do not believe she has done anything to protect consumers in her role.”