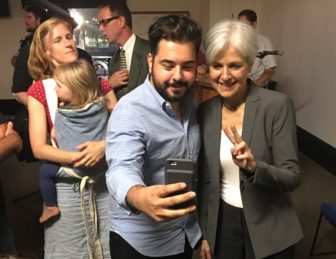 Just hours before Donald Trump was set to give his acceptance speech for the Republican presidential nomination in Cleveland, one of his third-party challengers rallied supporters in Stamford Thursday night.

In a 45-minute speech reminiscent of the long, fiery, policy-heavy speeches delivered by Sanders during his campaign, Stein called on his former supporters to join her in continuing the political revolution he started.

“This is kind of our moment to say what you did is absolutely earth-changing, and life-changing and history-changing,” Stein said. “And we are here tonight to say there is no way we are going to allow that revolution to stop here.”

The crowd responded with roaring applause.

Stein, the 2012 Green Party nominee for president, acknowledged the Republican convention in her opening remarks, saying Texas Sen. Ted Cruz’s decision not to endorse Trump should prompt voters to say “goodbye and good riddance to that pretense of a political party.”

Both major parties, she said, have become “obsolete and irrelevant.” The crowd responded with applause again.

She told reporters before the speech she was glad to be in a “strong and independent” state like Connecticut that is “rising up” to challenge the two-party system instead of in Cleveland. 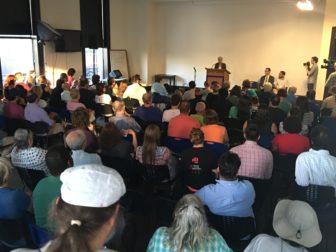 While she conceded her campaign is a “Plan B” for Sanders supporters, her platform of an emergency jobs program, a Green New Deal to tackle climate change, and student debt relief bares a striking resemblance to the proposals Sanders put forward.

In the two weeks since Sanders has endorsed presumptive Democratic nominee Hillary Clinton, Stein said she has seen a 1000 percent surge in donations to her campaign while interactions with her social media accounts have spiked as well.

Stein faces the challenge of gaining ballot access in every state. In Connecticut, she needs to get 7,500 signatures from registered voters by Aug. 10 to petition successfully to get her name on the ballot.

Organizers say she is more than halfway there – the current estimate is about 4,500 – but they are aiming higher to ensure they have a buffer if some of the signatures are deemed invalid.

“A lot of these petitions are handed over to town clerks who then hand them over to registrars of voters. These are the most partisan political players in the state, and obviously they have a vested interest in keeping us off the ballot,” DeRosa said about the process of validating the signatures.

Earlier on Thursday, Stein held a petition drive and meet-and-greet in New London. DeRosa said volunteers were out in Willimantic during the day as well. The state party plans to bring in professional signature-gatherers, he said. 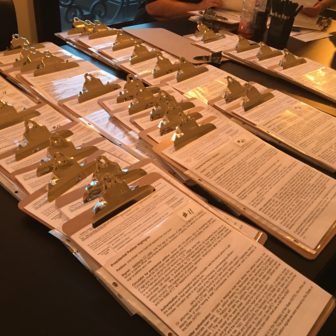 Many attendees picked up clipboards with petition materials to canvass in Stamford after the event ended. During the Stein rally, thousands of city residents were pouring into the downtown for a major music festival just outside the building.

At least one former Sanders supporter in Connecticut is dedicating himself to Stein’s campaign. Chris LeVasseur, a Manchester resident who volunteered for Sanders in nine states during the primaries, came to the rally in a bright blue “Bernie 2016” T-shirt. He said Stein was “always (his) second choice,” and he hopes others will join him in looking beyond the two-party system.

“We have a choice in everything except politics,” LeVasseur said. “That seems pretty backwards.”

He said he plans to help with Stein’s petition drive now and will go door to door for her campaign as November comes closer.

The most recent CNN/ORC poll shows Stein at 5 percent nationally. Fellow third-party contender Gary Johnson, the Libertarian Party nominee, received support from 13 percent of the poll’s respondents. At the top of the pack, Clinton led Trump 42 percent to 37 percent.