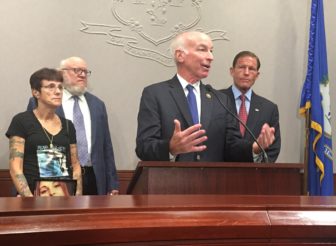 U.S. Rep. Joe Courtney, front, speaks during a press conference in Hartford. He is joined by Wendy Hartling, the mother of Casey Chadwick, who was fatally stabbed by an undocumented immigrant, and Hartling’s lawyer, Chester Fairlie, left, and U.S. Sen. Richard Blumenthal, right.

More than a year after an undocumented immigrant fatally stabbed a Norwich woman, two Connecticut lawmakers announced Monday they plan to introduce legislation in Congress to expedite the deportation of undocumented immigrants who have committed a violent crime or pose a threat to public safety.

The bill would give the U.S. State Department the authority to revoke all visas for countries that have been shown to “systematically” refuse the return of undocumented immigrants verified to be from there.

Currently, 23 countries have been deemed “recalcitrant” by the Department of Homeland Security, meaning they are not cooperating with removal efforts. Between 2012 and 2015, nearly 8,300 undocumented immigrants with criminal convictions were released from federal custody because their home countries refused to take them back, according to federal officials.

“I think this will be tremendously effective in pressuring countries to do the right thing, and follow their legal obligations,” said U.S. Sen. Richard Blumenthal, D-Conn, who is the primary sponsor of the legislation. “The mere threat of ending visas to countries that systematically or unreasonably refuse, or delay, taking back their own citizens when they commit crimes here – and they continue to endanger our citizens – will be very effective. It sends a message.”

The bipartisan legislation – which is being called “Casey’s Law” – comes after the June 2015 killing of Casey Chadwick, a 25-year-old Norwich resident. She was killed by Jean Jacques, an undocumented immigrant from Haiti. He fatally stabbed Chadwick in her apartment in a dispute over drugs owned by her boyfriend.

Earlier this year, Jacques was found guilty of murder and sentenced to 60 years in prison. But this is not Jacques’ first prison sentence. He spent 15 years in prison for an attempted murder in Norwich in 1996.

After he was released, the U.S. government tried and failed to deport Jacques three times. Haiti refused to acknowledge he was a citizen, and would not accept his deportation. Federal officials were unable to prove his status as a Haitian citizen.

This legislation plans to create a mechanism that could change the minds of government officials in uncooperative countries, especially those like Haiti that have signed repatriation treaties and are obligated to accept Jacques and others.

The bill would require Immigration and Customs Enforcement, known as ICE, to send cases to the State Department when countries refuse to accept a deportation. This would trigger a process that could result in citizens of those countries losing or being denied visas if the countries do not cooperate.

In recent years, Blumenthal said, ICE has declined to forward many cases to the State Department because immigration enforcement officials believed no action would be taken.

U.S. Rep. Joe Courtney, D-2nd District, who represents Norwich, said the most significant part of the bill is that it “mandates these cases be moved up the food chain” and gives the State Department the “teeth” it needs to convince countries to accept those being deported.

Blumenthal said the revocation of visas would only come after the Department of Homeland Security conducts an investigation and finds verifiable evidence that a country is wrongfully rejecting those the U.S. is attempting to deport. 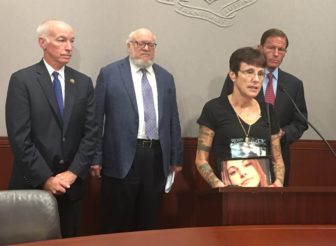 Chadwick’s mother, Wendy Hartling, holds a picture of her deceased daughter while she speaks.

He said Haiti would probably be found in violation of their legal obligation.

The bill was introduced with bipartisan support in the Senate, with Blumenthal and U.S. Sens. Chris Murphy, D-Conn., and John Cornyn, R-Texas, as sponsors. Courtney plans to introduce an accompanying bill in the House.

“Illegal immigrants convicted of violent crimes should not be left on our streets, and if other counrties won’t cooperate in taking them back there should be consequences,” Cornyn said in a statement. “I thank Senator Blumenthal for working with me to address this ongoing problem and keep our country safe from dangerous individuals who shouldn’t be here.”

The legislation comes after a year of hearings and meetings after Chadwick’s death. A report last month from the Department of Homeland Security’s inspector general found that ICE – even after four attempts – had not done enough to attempt to deport Jacques after he was released from prison. They also did not do enough to supervise him.

Blumenthal said ICE could only detain Jacques for 180 days after his release from prison. A 2001 Supreme Court ruling eliminated ICE’s ability to hold prisoners indefinitely. After Jacques’ release, the report says, between three and four officials from ICE’s Newark office were responsible for his case – and about 37,000 others. The report found they handled cases based on how easy they were to address, not necessarily by the risk posed.

The bill would not change the fact that officials would be faced with a limited window to take action against a refusing country, with only 180 days to act before an undocumented immigrant’s release.

In that time frame, the Department of Homeland Security would have to investigate whether a country is systematically rejecting deportations. If it finds evidence, the State Department could then threaten to take away visas from the refusing country. If the investigation is not completed by that date, ICE would have to release the undocumented immigrant back into the community.