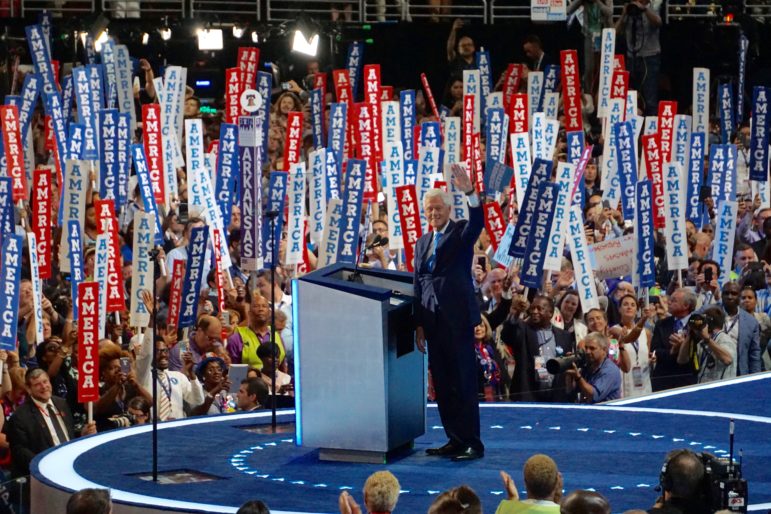 Philadelphia — Bill Clinton ambled onto the Democratic National Convention stage Tuesday night like a man dropping in on old friends, walking from one side to the other, drinking in the applause. He came to put a fresh spin on an old story, a tale that began in Connecticut.

He grinned. His audience laughed.

With a studied casualness, he told the story of Bill and Hillary, the partnership struck at Yale Law School, the journey to Arkansas and the White House. He trod familiar ground as he extolled his wife’s intellect as a lawyer, drive as a children’s advocate and secretary of state and devotion as a mother.

But in a year when the polls say America wants an outsider, Bill Clinton came to convince America that a woman who has lived in the national spotlight as first lady, a New York senator and Barack Obama’s secretary of state is the year’s real agent of change.

Clinton dismissed Donald J. Trump without mentioning him when he talked about how easy it is to, well, talk. He smiled, the shared secret, that talking is something he knows about.

“Speeches like this are fun,” he said, throwing up his arms. “Actually doing the work is hard.”

Clinton glossed over the projects his wife tackled as an ambitious college student, the first lady of Arkansas and the U.S., and as a senator and secretary of state. He talked about children’s health insurance, a bill on foster parents that involved a partnership with Tom DeLay, the congressman who wanted to destroy the Clinton presidency.

“She’s a change maker, that’s what she does,” he said.

He said it casually, as though unaware that the delegates held thousands of signs that read, “CHANGE MAKER.”

His narrative drifted, from public policy to the three times he proposed marriage, the last one after he bought a small brick house that Hillary once admired.

“We were married in that little house on October the 11th, 1975. I married my best friend,” he said. “I was still in awe after more than four years of being around her at how smart and strong and loving and caring she was. And I really hoped that her choosing me and rejecting my advice to pursue her own career was a decision she would never regret.”

Clinton described asking his wife after he became governor of Arkansas in 1979 to lead a committee studying how to provide health services to isolated communities.

“They recommended to do that partly by deploying trained nurse practitioners in places with no doctors to provide primary care they were trained to provide. It was a big deal then, highly controversial and very important,” he said. “And I got the feeling that what she did for the rest of her life she was doing there. She just went out and figured out what needed to be done and what made the most sense and what would help the most people. And then if it was controversial she’d just try to persuade people it was the right thing to do.”

He talked about the birth of Chelsea, the daughter who will introduce her mother Thursday night, when Hillary Clinton accepts the Democratic nomination for president. He talked about shared joys and sorrow, never naming the latter. Clinton, of course, is a man whose infidelities led to impeachment.

Their marriage survived. Now, Clinton is the supportive spouse, trying to help his wife reach the highest step on the ladder of American politics. At the same time, he is selling himself to America again, assuring voters he is ready for a new public role as the spouse of a president.

He talked about New York congressman Charlie Rangel calling one day to suggest Hillary’s life after the White House be spent as a senator from New York. Clinton mentioned the Senate seat had once been held by another outsider, a man named Robert F. Kennedy.

He said his wife backed President Obama in the hunt for Osama bin Laden and sounded an early alarm on the threat of cyber terror.

“She put climate change at the center of our foreign policy,” he said.

She worked to empower girls around the world, he said.

“And nobody ever talks about this much, nobody ever talks about this much, but it’s important to me,” he said. “She tripled the number of people with AIDS in poor countries whose lives are being saved with your tax dollars, most of them in Africa, going from 1.7 million lives to 5.1 million lives and it didn’t cost you any more money. She just bought available FDA-approved generic drugs, something we need to do for the American people more.”

He said nothing about the deaths of four Americans at a U.S. diplomatic post in Benghazi, other than to suggest the picture of her drawn at the Republican National Convention in Cleveland was a cartoon.

“Life in the real world is complicated,” Clinton said. “And real change is hard.”

“And she still is the best darn change maker I have ever known.” 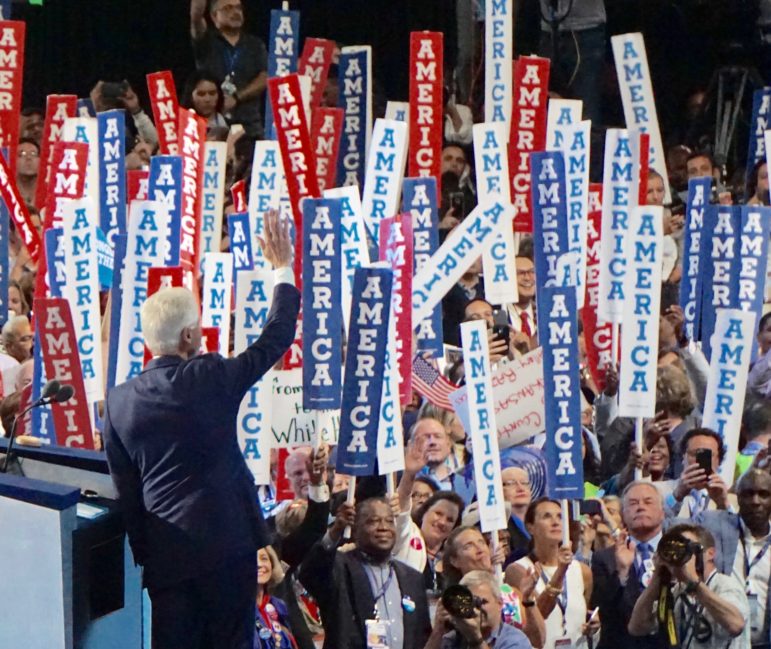 Bill Clinton talked about the day in 1971 he met a girl.